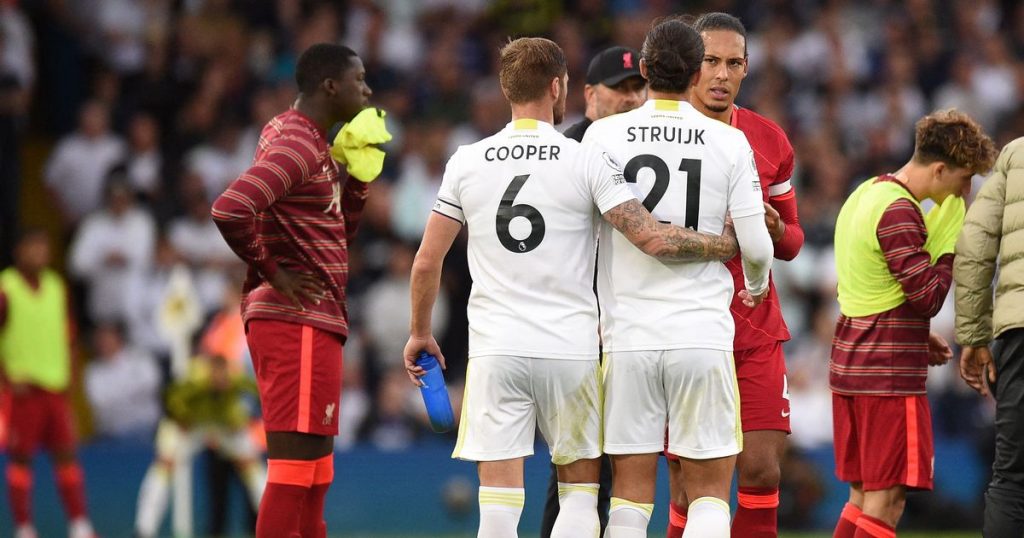 One of the pitfalls of working under Marcelo Bielsa is the fact you never stop, wherever you’re from and wherever in the world you’re taken to work. You are expected to devote your life to the job.

As a result, families are not often seen, birthdays and anniversaries are missed. Pablo Quiroga, the Argentine native and Bielsa’s right-hand man, does not have his family at every match.

He was beaming to see his relatives gathered in the directors’ box as he trotted out to lead the team’s pre-match warm-up.

James gets his welcome

Daniel James was finally back at Elland Road as a Leeds United player following the international break on Sunday afternoon.

Introduced during the warm-up, he was given the rousing reception he would have hoped for.

Kalvin Phillips paid tribute to brave Leeds youngster Sarah Emmott by holding up a shirt which said ‘RIP Sarah’ ahead of the match.

Just before the 4.30pm kick-off, the England international unveiled a shirt paying tribute to her after she died following a battle with a rare kidney disease called Congenital Nephrotic Syndrome.

They were seen looking tearful and emotional as Kalvin, Sarah’s favourite player, held the shirt aloft in front of the Sky cameras.

First, Jurgen Klopp removed his cap before embracing Bielsa in a huge bear hug rarely seen from the Leeds boss with opposition managers.

Then, as James Milner trotted through the home technical area, a little after the main glut of away players, Bielsa pulled him to one side.

The pair have not seen their paths directly cross in the past, but Bielsa must have been aware of Milner’s Leeds past to grab him like that.

There was some finger jabbing and back smacking, but Milner looked bemused and flattered by the whole episode. Milner would later get the warm reception expected.

As he went out to warm-up in the north-west corner he was loudly received by the fans.

Leeds fans give it to the Liverpool players

The beauty of having supporters back in the stadium has been the return of the colourful songs from the terraces.

First, Trent Alexander-Arnold had it when he went to take a corner from the north-east corner of the pitch.

When Jordan Henderson trotted out to warm up in the first half in front of the John Charles Stand he was also given a barrage.

In the fractious aftermath of the tackle by Junior Firpo on Harvey Elliott, emotions were running high for most parties concerned.

Once the penny dropped for Struijk on what had happened to Elliott in the tackle, you could see his distress and concern for the teenager.

The red card eventually came out from Craig Pawson, but before Struijk eventually trudged off the field he was consoled by both captains.

Compatriot Virgil van Dijk, a centre-back BBC Radio 5 Live had compared Struijk to in their pre-match coverage, and Liam Cooper each spoke with Struijk to calm him down.

Predictably, as he approached the tunnel, a section of the Liverpool support on the far side tore strips off Struijk.

In the direct aftermath of Struijk’s dismissal and departure, it was Daniel James who chose to react to the Liverpool support’s anger.

The left-back was seen gesticulating and approaching the visiting fans as they berated the Leeds players and Struijk.

Stewards had to hold back those most forcefully beckoning Firpo over even closer.