Anti-vaccine protesters clashed with police outside of the BBC’s studios in White City, London in a furious display against the UK’s Covid vaccination programme.

A video captured by local vlogger Paul Brown, part of BakedBeanMedia, shows demonstrators from Official Voice trying to storm the BBC’s former HQ, as the crowd pushes back against a large number of officers in a skirmish on Monday afternoon.

Official Voice, a group which describes itself as “a collective forum of like-minded truth seekers”, has been organising a campaign against the life-saving Covid vaccination rollout online for several weeks.

According to Brown, they are particularly against the idea of vaccine passports and rolling out the jabs to children.

Official Voice protesters try storming the BBC studios at white city but them come up against a heavy police presence- they are protesting against vaccine passports and vaccine for kids pic.twitter.com/FGTSJ6WLmu 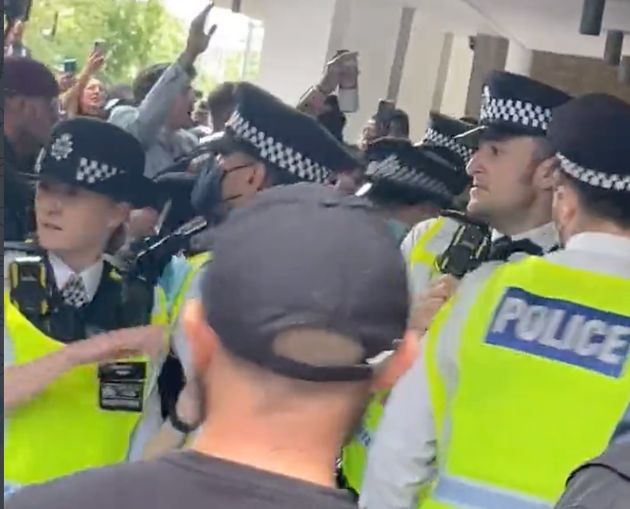 A still from the footage outside the BBC studios

The government announced last week that it was allowing all of those aged 16 and over to be vaccinated, even without their parents’ consent.

The vaccine passport refers to the NHS Covid Pass which proves if an individual has been fully vaccinated – if so, they can return from amber list countries without having to isolate.

It may also become necessary to prove your Covid status to get into nightclubs and other venues in England from September onwards, once everyone over 18 has had a chance to get vaccinated.

Its most recent Instagram post on @official_voicelondon included a photograph with a sign which reads: “Hands off our children! They will not be part of your experiment.”

Other posts call on its supporters to “be ready” for August 9 in London, when the group will “step it up” – although it does not elaborate on its plan.

It adds: “The media is the problem. The lies will end.”

This may explain why the group targeted the BBC’s former headquarters. Some programming is still made at Television Centre but most is now made elsewhere.

The group previously marched on Parliament Square on July 19 in a bid to end all Covid restrictions – even though almost all of the lockdown rules were lifted on that same day. 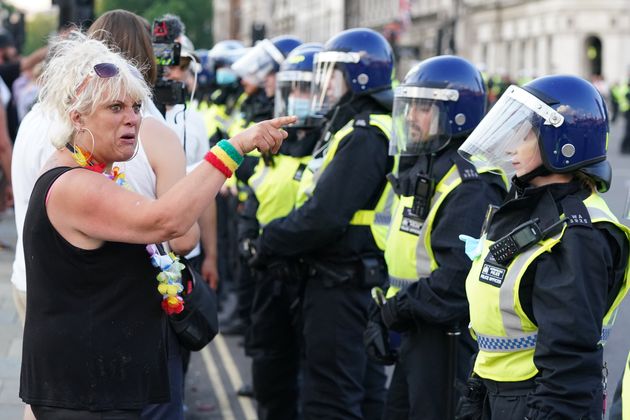 Police maintain a cordon as anti-vaccination protesters look on during a demonstration in Parliament Square, London, on July 19, 2021