Alex Scott had a bit of fun with Lord Digby Jones’ comments about her accent as she presented coverage of the Olympics on Saturday.

The presenter seemingly referenced how the former House Of Lords member said she “spoils” the BBC’s broadcasts with her “inability to pronounce her ’g’s at the end of a word”.

He had tweeted on Friday: “Competitors are NOT taking part, Alex, in the fencin, rowin, boxin, kayakin, weightliftin & swimmin.’

After responding directly to Lord Jones on Twitter saying she was proud of her accent, Alex appeared to slip in a cheeky reference to his words live on air. 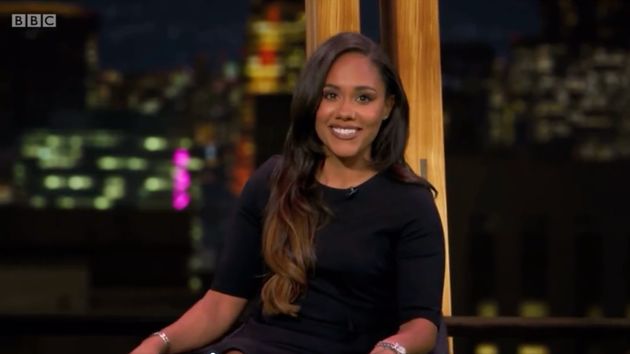 Alex Scott during Saturday’s Olympics highlights on BBC One

During Saturday evening’s Olympic highlights show, Alex recapped: “So far we’ve been runnin’, ridin’, shootin’, scorin’, swimmin’ and puttin’ but we’ve still got a lot of gold to still uncover.”

Many people on Twitter picked up on the subtle nod to the criticism, and applauded Alex’s response, hailing her as a “class act”.

This is brilliant from @AlexScott .. After being slagged off for her accent and “dropping her g’s” by a former Government minister, this is her opening link 👏🏻👏🏻👏🏻👏🏻
pic.twitter.com/Kv7vurDIv1

Absolutely here for the huge smile direct at the camera & glint in @AlexScott ‘s eye this evening as she emphasised dropping her g’s towards the end of this evening’s Today at the Games !! 🙌🤩 https://t.co/SmajCOrLfu

Alex had previously tweeted in response to Lord Jones’ comments: “I’m from a working class family in East London, Poplar, Tower Hamlets & I am PROUD. Proud of the young girl who overcame obstacles, and proud of my accent! It’s me, it’s my journey, my grit.”

She continued: “A quick one to any young kids who may not have a certain kind of privilege in life. Never allow judgments on your class, accent, or appearance hold you back. Use your history to write your story.

You are everything linguists and true lovers of language despise. Also, since we’re being picky, you are not “Lord Digby Jones”, you are Digby, Lord Jones. There’s a world of difference. But however you’re titled, you disgrace the upper house with your misplaced snobbery

What a curmudgeonly, elitist, snobby and rather nasty piece of anti working class trash this is against the sublime gem that is @AlexScott Don’t let the clapped out old dinosaurs get you down Alex. https://t.co/WCGrEL2Ev0

WHAT? This is insufferably pompous & patronising… @AlexScott is a working class East London girl who’s risen to the top of two professions through hard graft & talent. She’s winnin’ in life and with this snobbish attitude, you’re losin’. https://t.co/JX8JgZymQe

I thought you were a proud Brummie? We invented dropping the ‘g’. ‘Bostin!’ If you can’t embrace diversity of voice may I suggest you’re the wrong Lord for the wrong city – youngest, most diverse in Europe. @AlexScott is a fantastic broadcaster who doesn’t need coaching from you. https://t.co/1au2jjYnZk