A veteran who was deployed in Afghanistan called for a public inquiry into the UK’s role in the crisis on Wednesday’s BBC Question Time.

She said when she served in the military 2017 and 2018, and saw both the “benefits and negatives” to the UK’s presence in the war-torn country.

She said she was proud to see “green shoots” of progress emerging, such as support for women’s rights and general access to education, while the UK troops were in Afghanistan.

She continued: “Those green shoots are now stone dead.

“The Afghans I supported I have now heard have been executed in cold blood.”

She said the people she served with and their relatives are questioning what it was all for, and called for a parliamentary inquiry. 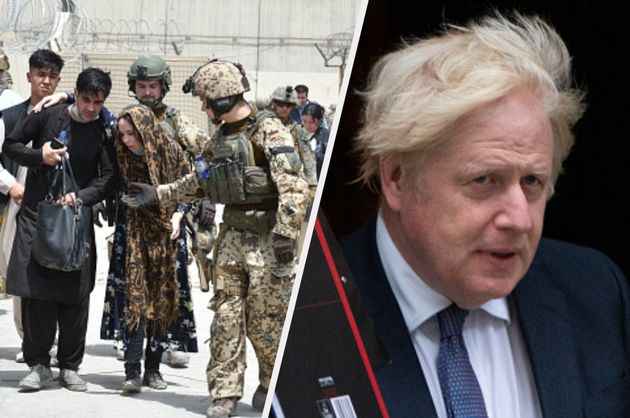 The former soldier explained: “The only way I can not be utterly embarrassed and humiliated about my service is if we, a democratic nation, hold those responsible for this to account and have a full parliamentary inquiry, which Boris Johnson is trying to weasel out of having, trying to pretend we don’t need one.

“This would hold those responsible both for the political decisions but also those in the military hierarchy who are responsible for strategic and operational decisions which have left to failure.”

She also hit out at General Sir Nick Carter for allegedly questioning whether the Taliban were even the enemy in light of their claims they were now a moderate group when talking to reporters.

The veteran said Carter “bears responsibility” for many of the decisions made over the last two decades which have let to Britain’s “loss” in Afghanistan.

She said: ”The generals responsible for that need to be held accountable.”

She explained that she wanted these senior military figures to “at least have a moment where they are held in very very humble silence for the decisions they have made”.

The audience member said this was the only way to prevent a future generation undergoing the same process in another nation.

Her speech was widely applauded by the Question Time audience.

Carter did appear on BBC Radio 4′s Today programme on Wednesday morning, and said the UK’s presence in Afghanistan will provide “lessons” for the future, but it’s not clear if he meant Britain would go on a similar mission again.

Chief of Defence staff Nick Carter on #R4Today saying the collapse of the military in Afghanistan has lessons FOR WHEN WE GO TO DO IT AGAIN!

The arrogant attitude of the British Empire on show yet again. pic.twitter.com/6Spl7wXvr4

Foreign office minister James Cleverly responded to the veteran’s plea and said: “We will of course need to look into all the phases around this investigation.

“There’s been an inquiry into the rationale around the original deployment – that mid-term mission shift from the submission of terrorism through to the capacity-building of institutions in Afghanistan and what’s happened most recently in terms of our military support will of course be looked at.”

Cleverly replied: “I’m not able to give that commitment here and now – but there is always, always, an after-action review.”

He said everyone involved in the Afghanistan process will be questioned about the UK’s role.