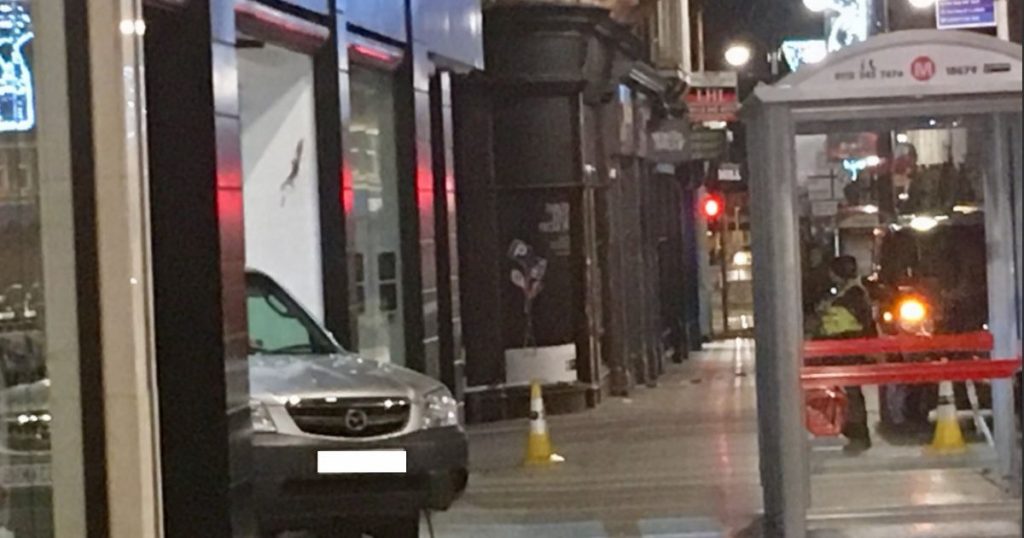 For many shoppers in Leeds, today’s robbery at the Flannels store will likely come as no surprise.

The designer clothing store, in Vicar Lane, seems to average at least one robbery each year – with ram raids and other armed theft attempts becoming rather commonplace.

The store, which is known for its high-end clothing with equally high-end price tags, tends to be a popular choice for would-be robbers planning a quick smash-and-grab.

And the most recent robbery took place this morning, when masked thugs entered the store with knives and threatened staff, before stealing display stock and speeding away in a car.

Thankfully, no one was injured in today’s robbery and officers from West Yorkshire Police are now working hard to trace the suspects and recover the stolen goods.

This is at least the fourth armed robbery at Flannels in Leeds since late 2017.

In December that year, masked men ram raided the store by driving a Vauxhall Astra into the front window and loading their car up with off-the-floor goods.

Shocking footage from the incident showed the car inside the store, with the security shutters having proved no match for the car that was driven through them at speed.

Then, in June 2018, the same store was ram raided yet again, when a silver Transit van was reversed into the front of the store.

And, less than two months later, in August 2018 the store was ram raided by a vehicle once more – this time, a stolen Nissan smashed through the front window of the store, with tens of thousands of pounds worth of stock stolen.

The Nissan was left in the store, as the gang of thugs leaving in a black BMW and a red Mercedes hatchback.

Today’s incident has left staff feeling unsure about the immediate future of the shop, with one member of staff commenting that they do not feel it will be reopening any time soon.

A spokesperson for West Yorkshire Police said: “At 10.26am today, police received reports of an armed robbery at Flannels clothes shop, in Vicar Lane, Leeds.

“A number of masked males armed with knives entered the store and threatened staff. They stole a quantity of stock from the displays and drove off.

“Armed officers were deployed to secure the scene and support the search for the suspects.

“No-one was injured during the incident and enquiries are ongoing.”

Have you ever witnessed a robbery at Flannels in Leeds? Let us know in the comments!