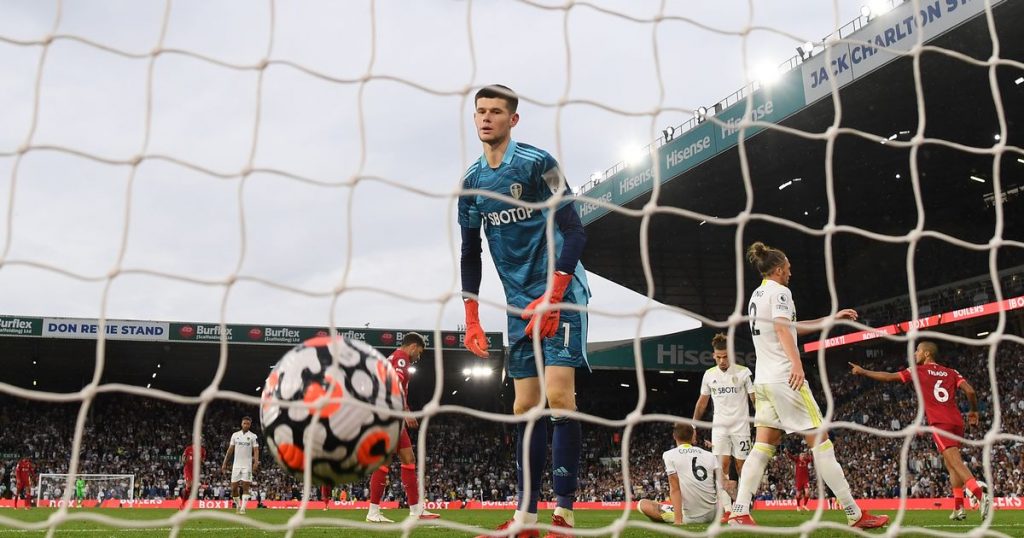 Marcelo Bielsa’s post-match comments after Sunday’s 3-0 defeat to Liverpool revealed that he had recognised an issue in the way in which his team played, one that allowed the Reds to profit from.

“When you lose the ball before you finalise an action, first of all it decreases the amount of attacks and also what conditioned the first half was what would happen after we lost the ball,” said the Whites head coach.

“Two things happened to us, combined complicated the performance, losing the ball before finalising the attacks, these losses could see them take the ball for advantageous situations for themselves.

“That’s why I said what Klopp planned favoured his forwards shining, and what I proposed did not give the same options to our men.”

In other words, Leeds were turning the ball over too often and allowing Liverpool to attack them regularly because of this.

Liverpool’s pressing was part of this but also the Whites made a rod for their own backs by being extremely direct with the ball rather than looking to slow the game down and hold the ball for any stage. This could have provided some respite from what at some stages felt like relentless waves of Liverpool attacks.

Fast attacks have been a key part of the Whites game plan under Bielsa, as shown by the fact that Leeds were the second highest rated team for ‘direct attacks’ in the Premier League last season according to Stats Perform’s ‘The Analyst.’

The site defines these attacks thusly: “The number of open play sequences that starts just inside the team’s own half and has at least 50% of movement towards the opposition’s goal and ends in a shot or a touch in the opposition box.”

Think of goals like Patrick Bamford‘s at Leicester, where Pascal Struijk won the ball on halfway, before Bamford fired into the net just a couple of passes later, or either of Rodrigo’s at Burnley as Leeds won the ball just inside their own half and catapulted forwards to score.

In Sunday’s game, Leeds’ best opportunity to score came through one of these attacks.

It was Kalvin Phillips’ long pass which allowed Raphinha to break behind the Liverpool defence and set up a golden opportunity for Rodrigo to score, only for the Spaniard to blast straight at Alisson in the Liverpool goal.

There was also an opportunity when Raphinha again broke down the right and squared for Bamford, with Virgil van Dijk doing enough to stop the striker getting a clean connection on the ball to finish. However, Bielsa’s side were unable to create many other chances like this in the game.

Meanwhile, Liverpool were thriving on the fact that Leeds’ desire to attack so directly meant that they could be exposed due to regular turnovers, with many of the team committed forwards, such is Bielsa’s way. This saw the Reds rack up 4.1 expected goals, according to fbref.com and emphasises the feeling that the 3-0 scoreline was actually kind to Leeds.

In fact, fbref ranks Leeds as the second worst performing team for expected goals against so far this season. They are joint with Norwich on nine, with only Friday’s opponents, Newcastle giving away better chances to score. Of course, Leeds have faced some very difficult opponents in the early stages but their propensity to give the ball away has put their defence under huge strain and made the games far easier for those top teams than it needed to be.

Another example came in Leeds’ opener, when Raphinha had the ball shortly after Manchester United scored their first goal. The Brazilian is a player who looks for the killer ball at all times and it’s a big part of what makes him so dangerous, however, here was the moment for Leeds to try and get a foot on the ball.

Stuart Dallas was in the foreground and a pass to his feet could have seen him progress into the Manchester United half by carrying the ball. Raphinha could have also continued to carry inside, allowing midfield options to position themselves to receive the ball.

Instead, Raphinha played the long pass looking for Jack Harrison on the wing. The pass failed to find Harrison and Leeds’ opponents had the ball straight back, instead of having to face a concerted attack.

Returning to The Analyst, we can gain further insight into Leeds’ attack this season. According to the stats site’s ‘team sequences’ page – which looks to define attacking style – Leeds have made the fourth highest total for ‘direct attacks’ this season, with a total of nine. Contrastingly, they have made the fourth fewest ‘build-up attacks’ with only three. These are defined as attacks to feature at least 10 open play passes and end with a touch in the box or with a shot at goal.

Compared to last season, Leeds were one of the highest-rated teams for direct attacks, whilst ranking midtable for build-up attacks, this shows that there is change in style early on in the season. Last season, despite being direct, Leeds were not one-dimensional in an attacking sense, where there is a sense that they have been in the early part of 21/22.

There could be a few reasons for this – firstly, Leeds have played two title challengers in Manchester United and Liverpool, whilst another of their other opponents in the opening four games, Everton have had one of the best starts in the league. Therefore, the way the opposition play has influenced how Leeds have attacked, feeling that hitting space at speed is the best chance to open up high quality opposition.

It could also be that Bielsa doesn’t feel he has the personnel in midfield to try and hold the ball in midfield at the moment. It’s been clear for the last two summers that Leeds have wanted to upgrade their midfield, coming close to signing Michaël Cuisance and Conor Gallagher before ultimately ending up with neither. With that being the case, rather than trying to build attacks through the midfield, Leeds simply look to bypass it and hit the flanks as early as possible.

As Leeds come into a run of games where they will hope to dominate more than they have been able to in the opening four fixtures, we will see whether this lack of build-up attacks continues. If it does, it suggests that Leeds are doubling down on attacking as quickly as possible, rather than looking to exert control. Although they will certainly catch out some of the poorer teams, expect to see them giving away some big chances as they do so as they will continue to leave themselves exposed to counter attacks.