Save the world! (and some money too): Slash the cost of your bills and protect the planet by making small changes to your home

By Graham Norwood For The Daily Mail

A UN report describes the threat of global warming as ‘unprecedented’ and warns that heatwaves, floods and drought will be more frequent and intense in the next 20 years.

And homes account for 15 per cent of greenhouse gas emissions, official statistics reveal, with 19 million below a ‘C’ in their Energy Performance Certificates — the Government’s rating for homes.

‘Climate change will affect future mortgage applications,’ says David McGrail of First Mortgage. ‘When you consider subsidence can knock 20 per cent off a home’s value — about £50,000 of the average price — it can have an impact, and make you more at risk of negative equity.’ 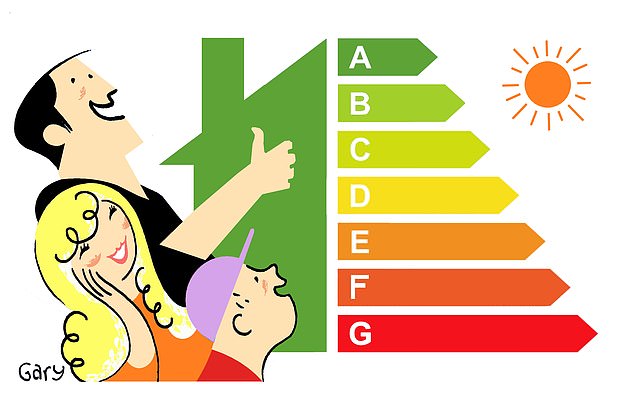 Climate fight: Homes account for 15 per cent of greenhouse gas emissions, statistics reveal, yet 19 million in Britain fall below a ‘C’ in the Government’s Energy Performance Certificates

Some new homes are ahead of the game. But if you have an older home, there’s still plenty you can do to save energy — and money. Here’s how . . .

You can have floor insulation, too. Some homes will be eligible for the Energy Company Obligation grant. See powercompare.co.uk.

Cost? This varies, depending on house size, but £500 to £1,000 is a good start. Consumer body Which? and the Energy Saving Trust calculate you could pay for it with reduced energy bills after five years.

Solar panels convert sunlight into electricity, that is stored and used in your home. It cuts power bills and some people even sell ‘spare’ electricity to the National Grid under the Smart Export Guarantee tariffs scheme. 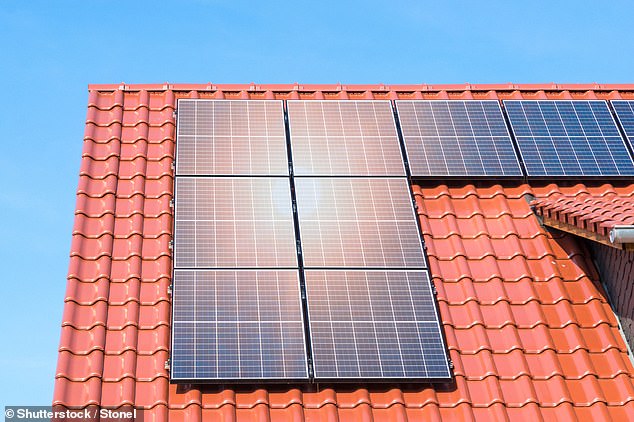 Solar panels convert sunlight into electricity, that is stored and used in your home. It cuts power bills and some people even sell ‘spare’ electricity to the National Grid

A south-facing roof is best, unshaded by buildings between 10am and 4pm to get the maximum solar rays.

Cost? Typically about £5,000. It may take 20 years or even more to recoup its cost in electricity bill savings at existing rates.

Double or triple glazing will help cut energy bills, but if the windows are south facing they may magnify the effect of sunshine, and overheat a room.

No more than double glazing is advised if a room is in direct sunlight for many hours a day.

Cost? Website Double Glazing On The Web says triple glazing a two-bedroom home would cost £2,000 on average and up to £7,000 for a larger house. Double glazing can cost up to 70 per cent of that.

Replacing all bulbs in your home with LED lights could cut carbon dioxide emissions by 75 per cent. Over a year that’s the equivalent of a car being driven 140 miles. It’s now illegal to make halogen lights but old stock can still be sold and the bulbs are found in ovens, cooker hoods and security lights. Try to avoid these.

The older the boiler, the less efficient it is; if yours is rated D, E, F or G (as opposed to higher-rated A, B or C) then a new one could save you substantial sums and give off less carbon dioxide.

Ground source heat pumps are pipes buried in the garden to extract heat, which is then circulated into the house for radiators, underfloor systems and water.

Savings depend on what existing energy supply is being replaced. You could save £1,050 a year on average if you currently rely on old storage heaters.

On the market… planet-friendly