New infographics created by scientists at Kings College London show how the generation we belong to affects our opinions and lifestyle.

The interactive graphs show how schools of thought differ between Millennials, Baby Boomers and Gen X around subjects including homosexuality, race and gender roles.

According to the data, British Millennials, who were born between 1977 and 1995, aren’t as tolerant as Gen Z when it comes to same-sex marriage.

And the youngest generation of adults, known as Gen Z, are not only rejecting cigarettes and alcohol but have the healthiest body weight too. 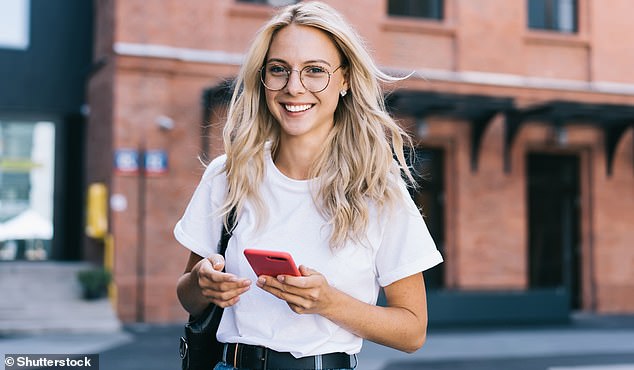 If you were born between 1977 and 1995, you’re officially a Millennial (also known as Generation Y), pictured

The graphs are available on a new website, created by the Policy Institute at King’s, and tell the story of ‘how when we’re born shapes who we are’.

It uses data from a variety of sources, including Health Survey for England and British Social Attitudes – an annual survey conducted in Britain.

Adults born since 1996 are commonly described as Gen Z, while Millennials are people born between 1977 and 1995.

Those born prior to 1946 are called the pre-war ‘silent generation’, while kids born since 2011 are known as ‘Gen Alpha’. 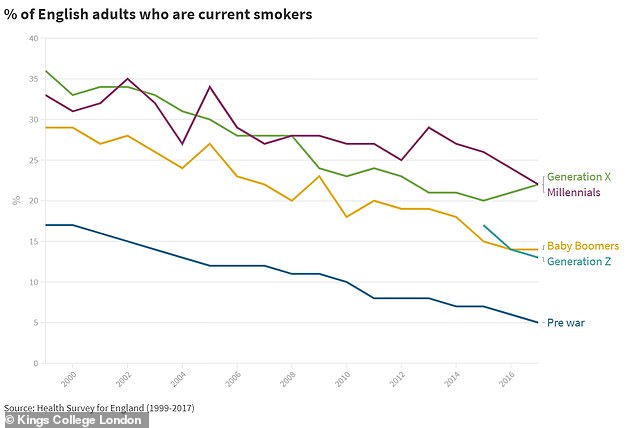 Gen X and Millennials have the most smokers per cohort in England – 22 per cent. Only 5 per cent of the ‘silent generation’ (pre-war) in England are current smokers, according to the data

According to the scientists, the graphs reveal some fairly positive findings when it comes to public health, at least for the youngest generation of adults.

Only around 13 per cent of Gen Z adults in England are smokers, compared to 22 per cent for both Millennials and Gen X.

And despite living through the golden era of tobacco advertising throughout the 1950s and 1960s, the pre-war generation in England now smoke the least (just 5 per cent in England are current smokers).

It’s a totally different story when it comes to alcohol consumption, however. 25 per cent of pre-war adults – more than any other generation – drink alcohol five or more days a week. 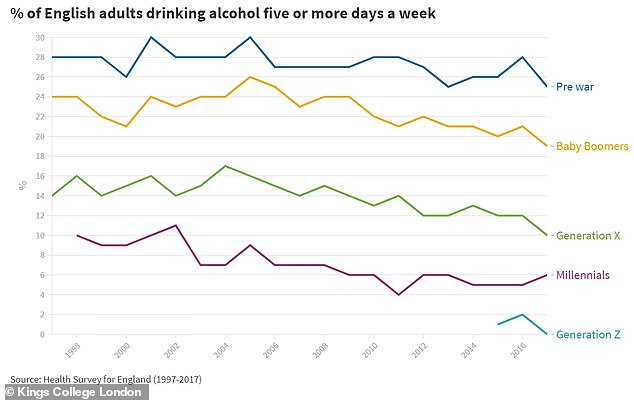 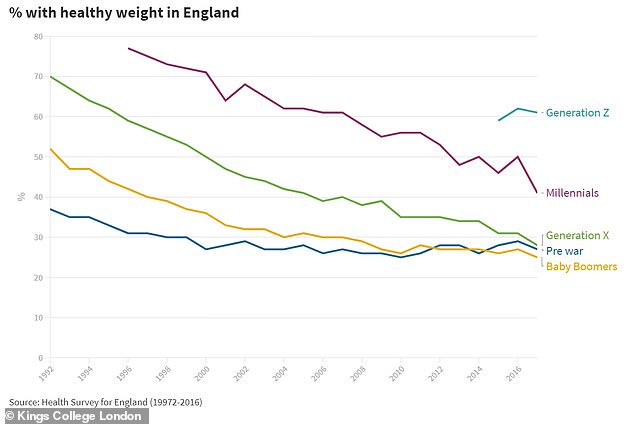 Gen Z has the highest proportion of adults in England who have a healthy weight (61 per cent). Baby Boomers have the lowest (25 per cent)

But it’s not all good news on health – of the first lot of Millennials in England who became adults in 1996, 77 per cent were a healthy weight.

But this slumped to 41 per cent in 2017, likely as a result of poor diets and sedentary lifestyles. 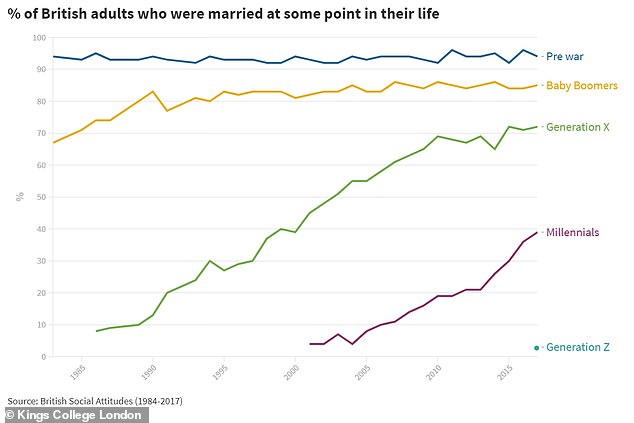 The death of marriage is exaggerated, but it is declining across generations, the data shows

Only 10 per cent of Gen X and Millennials in the US had no sexual partners in the last year. This compared with 30 per cent for Baby Boomers and 31 per cent for Gen Z

According to the Policy Institute, the death of marriage is exaggerated, but it is declining across generations.

Ninety-four per cent of pre-war Brits were married at some point in their life, but this figure steadily slides for the younger generations.

The stats also reveal more about the sex lives of the Americans – 31 per cent of US Gen Z adults have had no sexual partners in the last year, which is on a par with Baby Boomers (30 per cent).

This compares with 10 per cent for both Gen X and Millennials adults, suggesting these generations have the most active sex lives in the US at least. 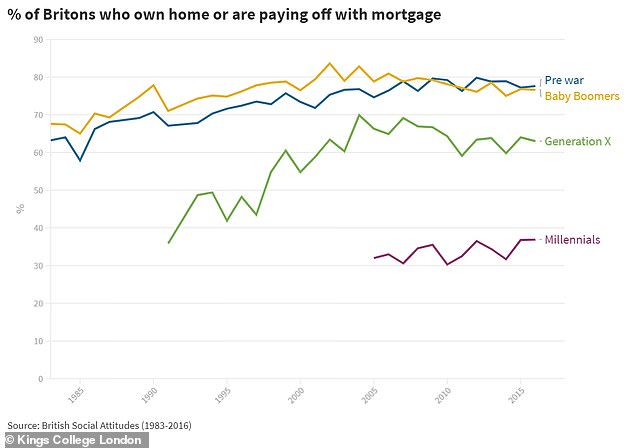 Depressingly for Millennials, the data shows high property prices really are forcing them to rent when it comes to home ownership.

Just 37 per cent of Millennial Brits own a home or are paying off a mortgage – compared with 76 per cent of Baby Boomers and 77 per cent of pre-war babies.

According to the Policy Institute, younger generations have been ‘increasingly locked out’ of owning a home as they enter careers and start families.

‘Back in 1984, when the average Baby Boomer was in their late twenties, two-thirds of their generation already owned their own home,’ it says. 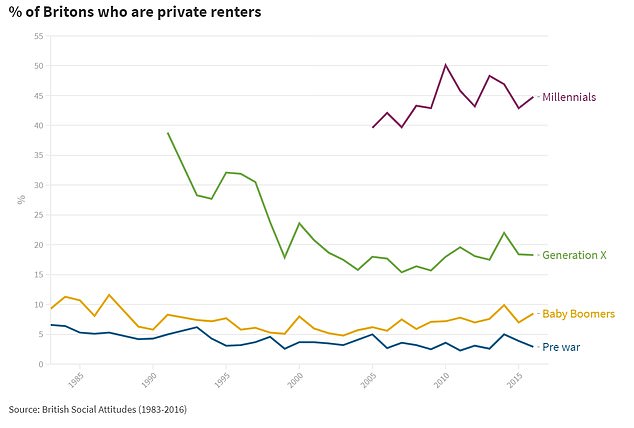 As of 2016, 45 per cent of Millennials are renting privately – which is more than any other generation

‘But by 2016, when the average Millennial was in their late twenties, only 37 per cent of them owned their own home.

‘This change has utterly reshaped life experiences in the space of two generations.’

The ‘inevitable consequence’ has been a huge increase in renting – 45 per cent of Millennials are private renters, compared with 18 per cent of Gen X, 8.5 of Baby Boomers and 3 per cent of pre-war. 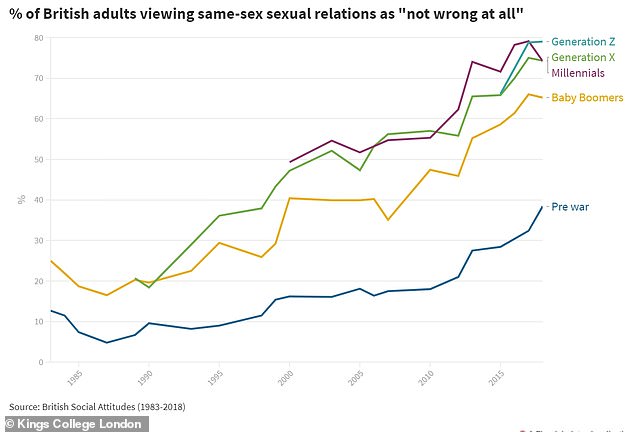 79 per cent of British Gen Z adults say same-sex sexual relations are ‘not wrong at all’, compared with 65 per cent of Baby Boomers 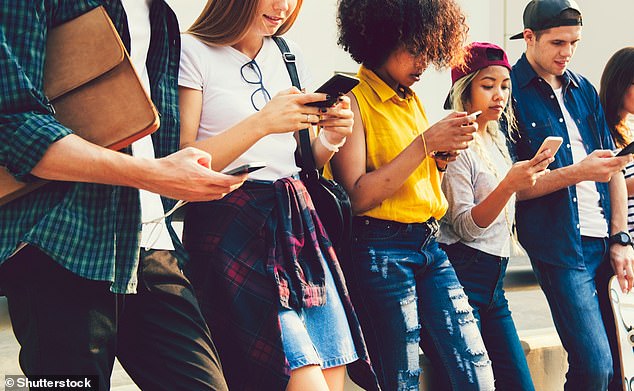 Those born after 1996 (known as Gen Z) are growing up in a world that has always been associated with technology. They are said to be the most connected, educated and open minded generation (stock image)

According to the data, 79 per cent of British Gen Z adults think same-sex sexual relations are ‘not wrong at all’ – more than any other generation – suggesting tolerance of other people’s sexuality is on the rise.

Pre-war babies are less convinced by same sex relationships, however – only 38 per cent described them as not wrong, according to the most recent data – suggesting the more recently we were born, the more supportive of gay rights we are.

‘Our attitudes to homosexuality have changed enormously in just a few decades,’ the Policy Institute says.

‘In Britain, only around one in 10 thought that sexual relations between the same sex were “not wrong at all” in the late 1980s, and now it’s around seven in 10.

‘All generations have moved a long way, with the pre-war generation the only cohort standing out as significantly different.’

The US shows a similar pattern – just 34 per cent of pre-war babies think same-sex relations are not wrong at all, compared with 77 per cent for Gen Z. 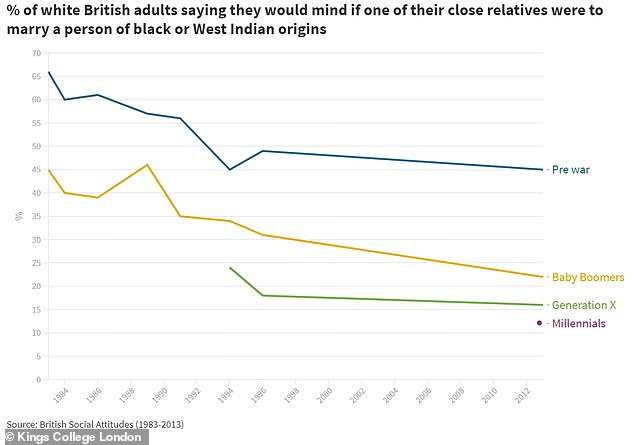 12 per cent of white British Millennial adults would mind if ‘one of their close relatives were to marry a person of black or West Indian origin’. This was higher for Gen X (16 per cent), Baby Boomers (22 per cent) and pre-war (45 per cent)

The data also reveals some slightly concerning stats regarding race relations in Britain.

As of 2013, 12 per cent of white British Millennial adults would mind if ‘one of their close relatives were to marry a person of black or West Indian origin’.

This compared with 16 per cent for Gen X, 22 per cent of Baby Boomers and almost half – 45 per cent – for the pre-war ‘silent generation’.

‘Attitudes to race and racism have moved a long way in a relatively short period of time – but it’s also clear that racist attitudes persist among significant minorities of the public,’ the Policy Institute says.

‘For example, over half of Brits said they would mind if a relative married a black person in 1983, but this was under one in five for all except the pre-war generation by 2013.’ 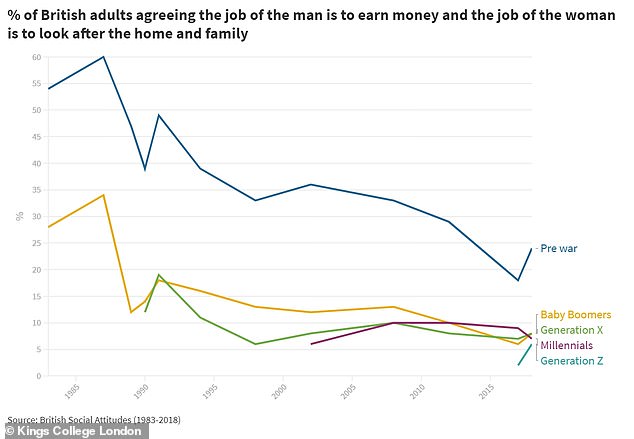 As for gender roles in the home, Baby Boomers Gen X, Millennials and Gen Z largely disagree that ‘the job of the man is to earn money and the job of the woman is to look after the home and family’.

This is less the case for the silent generation – 24 per cent of whom agreed with the archaic statement.

‘This oldest group have moved a long way, but their formative experiences in a different social context means around a quarter hold on to this view,’ the Policy Institute says.

Interestingly, in the US, a greater proportion of Gen Z adults (22 per cent) agreed with the statement than Millennials (19 per cent).

But, again, a greater percentage of the silent generation (53 per cent) agreed with the statement compared with any other generation. 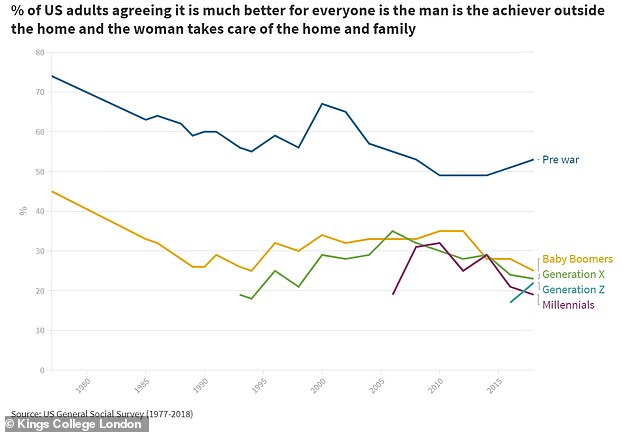 In the US, patterns were similar to the Brits when it comes to beliefs in ‘traditional’ gender roles

There are currently 15 graphs for users to interact with on the site, separated into six categories – homosexuality, sex and marriage, health, race, gender roles and home ownership.

More data and stories will be added over the coming weeks, and there’s also a quiz that tests people’s knowledge and perceptions of different generations.

The infographics have been launched to mark the publication of Generations, the new book by Bobby Duffy, a professor of public policy and director of the Policy Institute.

The book reveals that some of the common preconceptions of the generational cohorts are just ‘tired stereotypes’.

Professor Duffy recently conducted a survey that found Britain was ranked one of the nations most against political correctness.

Woke Britain? We’re among the most anti-PC in the world! More than half of us think people are too easily offended, poll shows

Woke warriors won’t like the sound of it – but Britons are among the world’s most anti-PC populations, a poll suggests.

Respondents in 28 countries were asked to rate their feelings about woke behaviour on a scale of nought, meaning people are too easily offended, to seven, indicating that the population ‘need to be more sensitive to those from different backgrounds’.

In Britain, 51 per cent rated their views at between nought and three, ranking this country as one of the nations most against political correctness.

Only 32 per cent of Britons believe ‘culture war’ divisions – revolving around supposedly insulting history and opinions – are a problem in the UK.

In contrast, 57 per cent of Americans thought the US was divided by culture wars.

Countries where people were most likely to think others should speak carefully about minorities included those with little freedom of speech.

Professor Bobby Duffy, of King’s College London, which carried out the study with Ipsos Mori, said the findings indicated ‘our particular suspicion of the ease with which people can take offence and the policing of speech’.

He said: ‘International comparisons put your own country’s problems into perspective – and the much greater sense of tension between groups in the US is a useful reminder that we don’t, yet, have nearly as deeply embedded divisions or a culture war.

‘There are important signals, however, of the cultural preferences in Britain, with our particular suspicion of the ease with which people can take offence and the policing of speech.

‘Of course, this tension is a constant of cultural change, as new generations and contexts have different standards, but it is still a signal of a need for an open discussion of free speech in Britain.’

Countries where people were most likely to think others should speak more carefully about minorities included some with religious sensitivities and others with little freedom of speech.