Many of the ladies arriving on the Oxfordshire town’s riverbanks this morning for the high society fixture were wearing trousers and shorter skirts and dresses, after it was revealed this week that the 182-year-old dress code was being scrapped for a more 21st century approach.

The long-standing sartorial rules – which asked for over-the-knee skirts and no trousers, and a blazer or smart jacket – have crumbled under pressure from campaigners who branded the former dress code ‘symbolic of an era when women couldn’t compete and were just there to look pretty.’

Judging by those queuing to get through the gates this morning, the key change appears long overdue; there seemed to be little hesitation in ditching formal wear in favour of more fashionable garments. 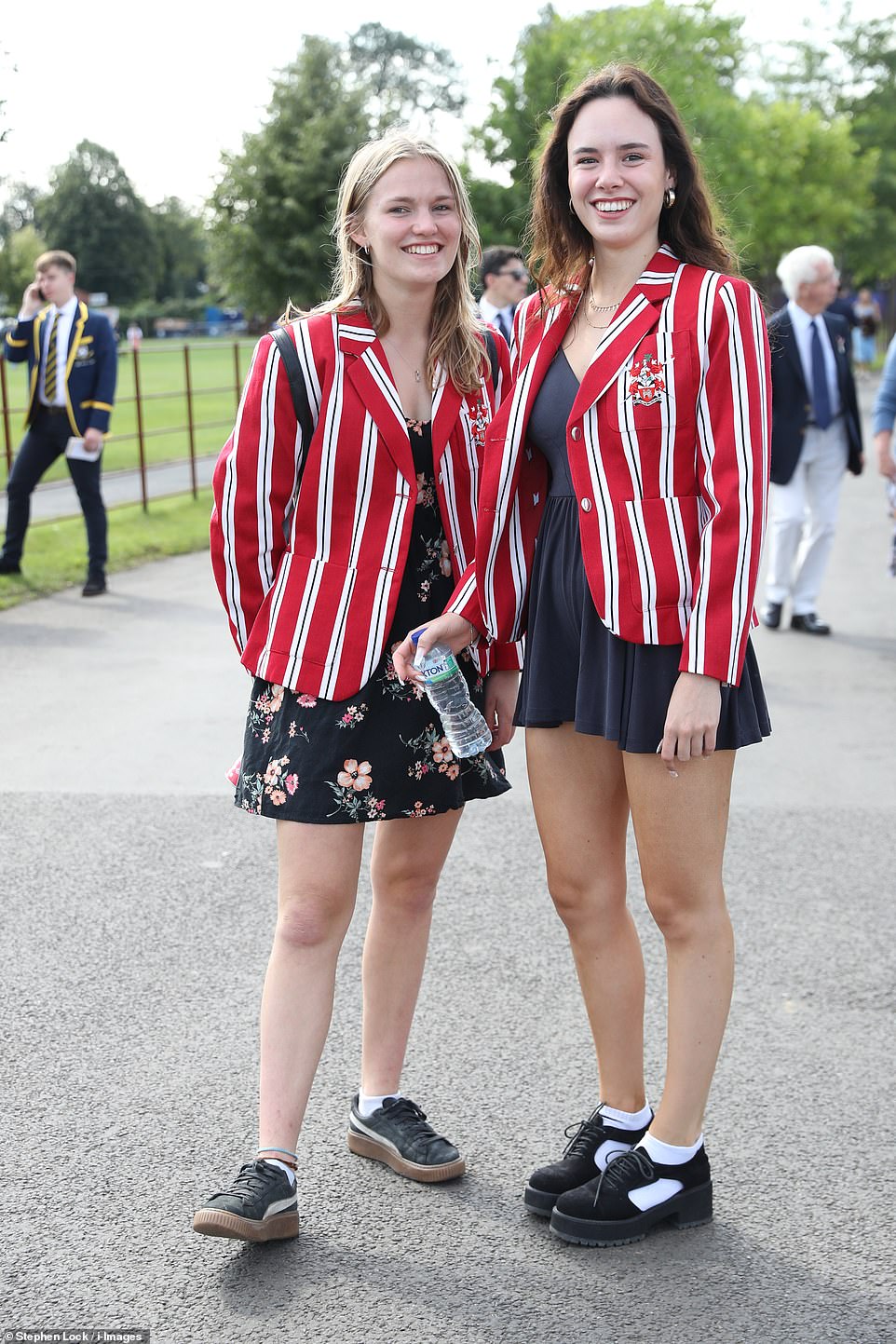 Day one Henley Royal Regatta attendees proved they’ve most definitely got the memo after the high society fixture updated its 182-year-old dress code to allow trousers and shorter skirts for women. Pictured: Two women arrive at the Oxfordshire regatta on Wednesday wearing trainers and shorter dresses 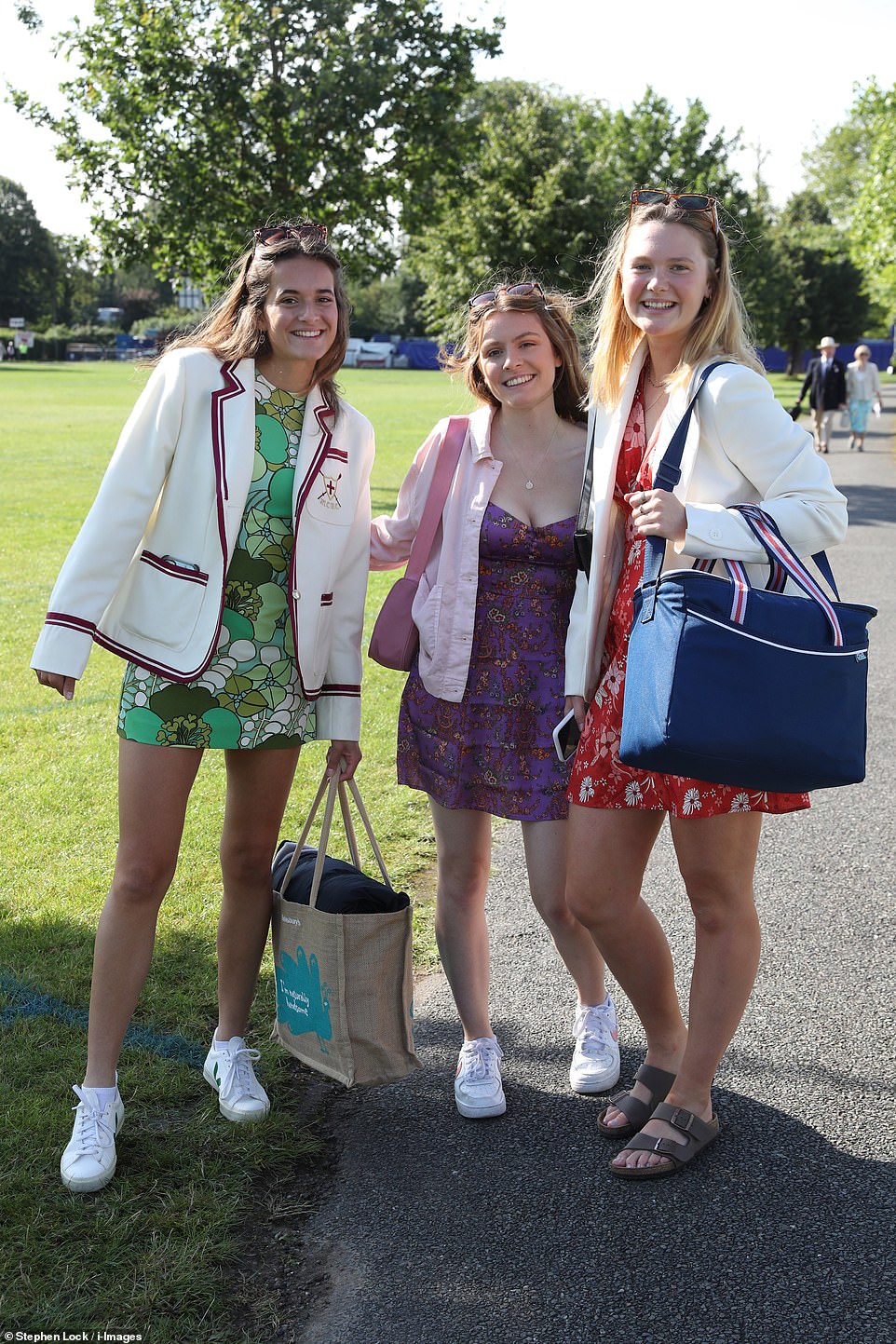 Regatta chairman Sir Steve Redgrave announced the historic update to the dress code this week, saying ‘times have changed’ and it is the ‘right time’ to shake up the rules. Pictured, as the first day of the rowing gets underway, three spectators arrive in Henley 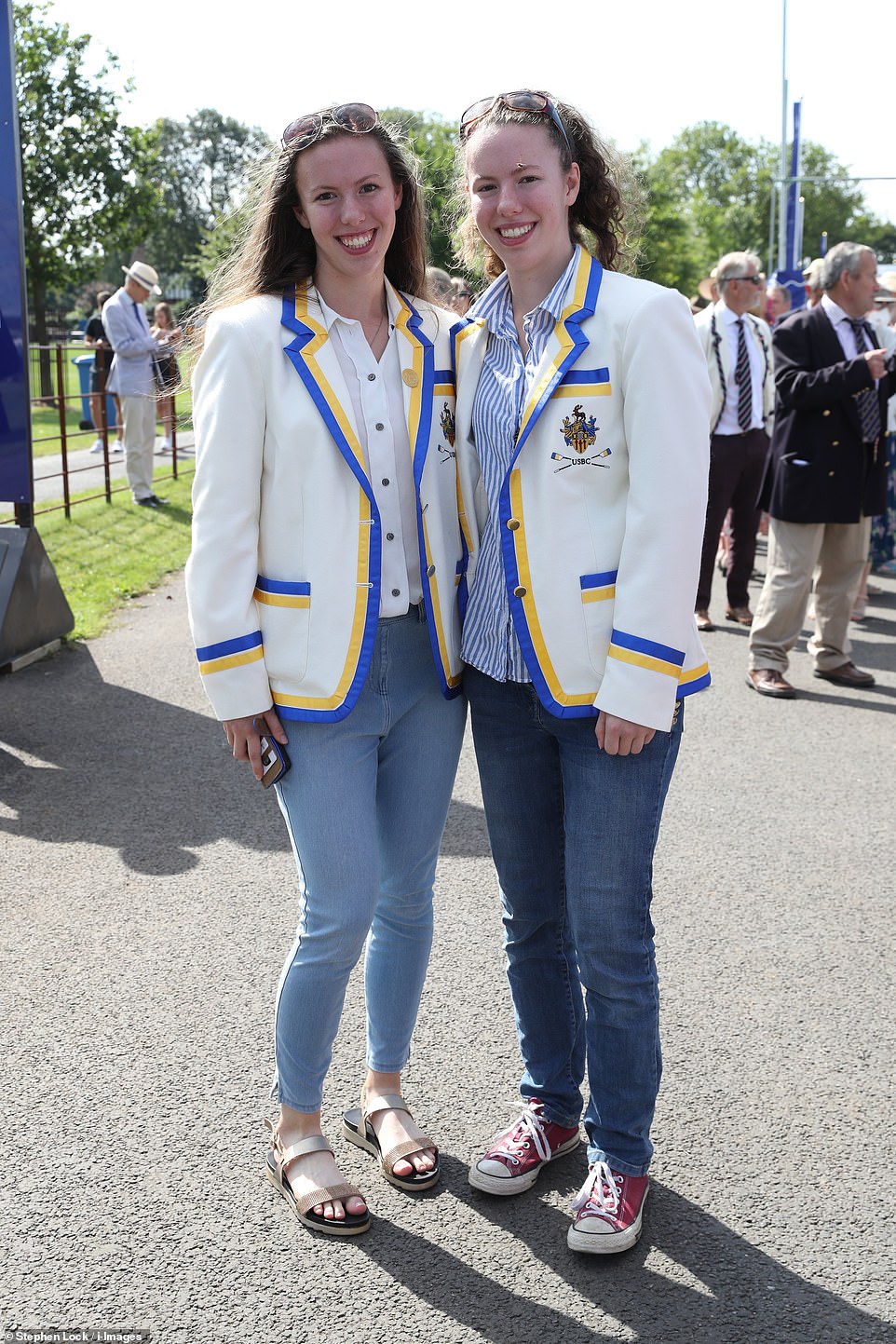 Not just trousers, but jeans! Two attendees opted for skinny denim to see off the restrictive dress code with casual panache

Shops in the riverside town have already reported a boom in sales of shorter dresses and skirts ahead of the meet beginning.

Among the looks on display today were the traditional colourful, striped blazers matched with casual brands including Birkenstocks and Converse, with two attendees also opting to stretch the trouser rule to its limits – by donning skinny jeans.

Many of the gents also adopted a more casual look, with shorts and colourful trousers, teamed with sneakers and boat shoes a popular look.

The regatta, which was cancelled last year due to the pandemic, will see national clubs from up and down the country vying for glory on the emerald Thames in races scheduled until Sunday.

The Regatta has ruled it will hold the event as safely as possible, in line with Government and Public Health and those queuing to get in this morning had to prove they were ‘Covid safe’. 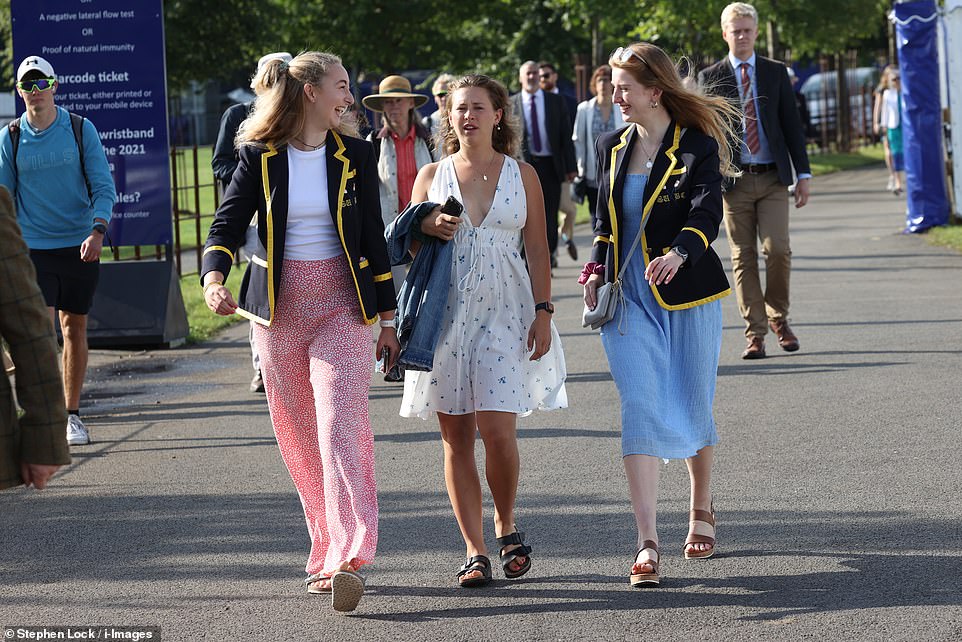 Blazer and Birkenstocks: One racegoer arrived in casual sandals and floaty wide-legged trousers at the rowing spectacle 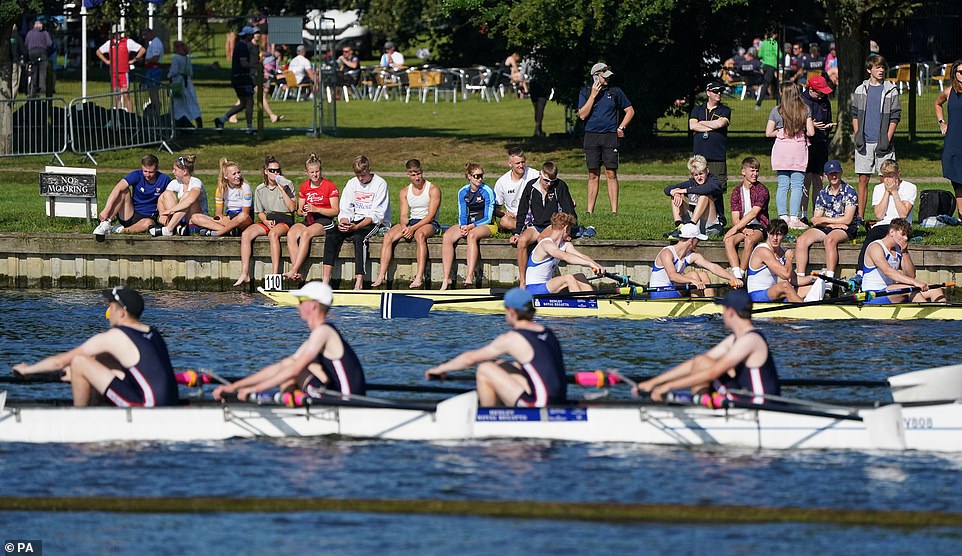 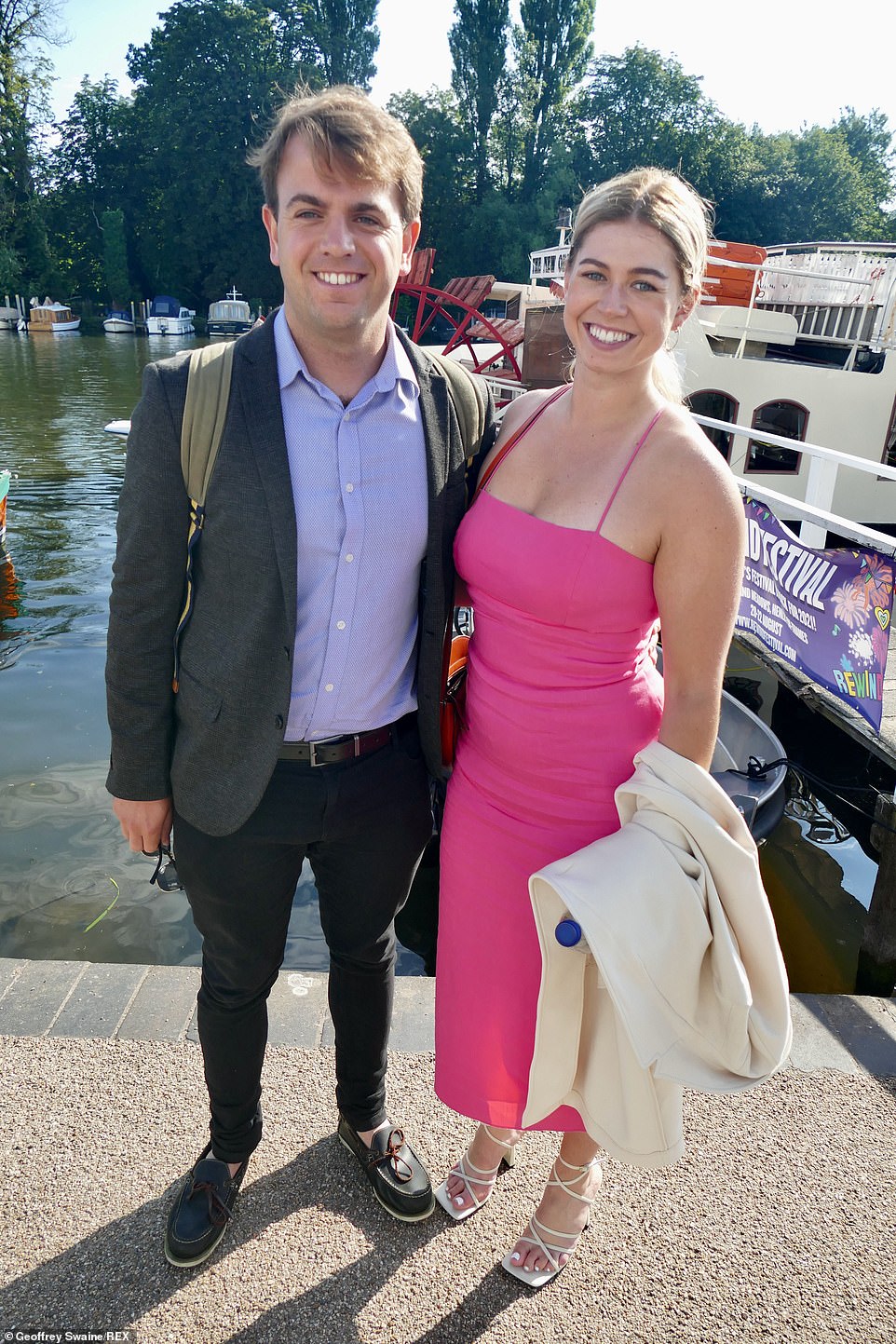 The Henley Royal Regatta will take place in Henley-on-Thames, from today until Sunday 15th August. The event was cancelled last year due to the pandemic. Pictured: A couple arrive at the riverside this morning 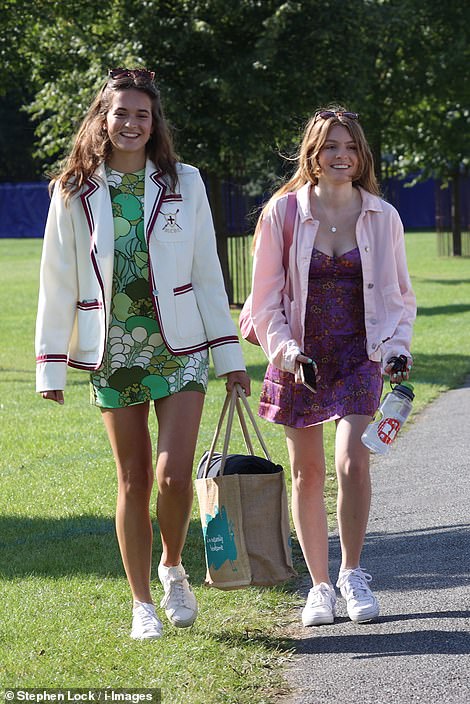 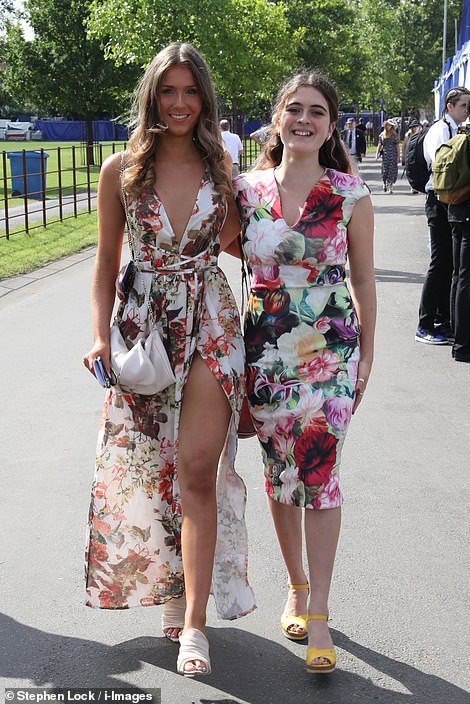 Earlier this week, Regatta chairman Sir Steve Redgrave announced the historic update to the dress code, saying ‘times have changed’ and it is the ‘right time’ to shake up the rules.

He said: ‘We have been asked for a number of years if we could look at the ladies’ dress code because times have changed.

‘Even though we see ourselves very much as a traditional event with a traditional way of dressing, with the introduction of more women’s events in recent years, we felt that it was the right time to make the change. 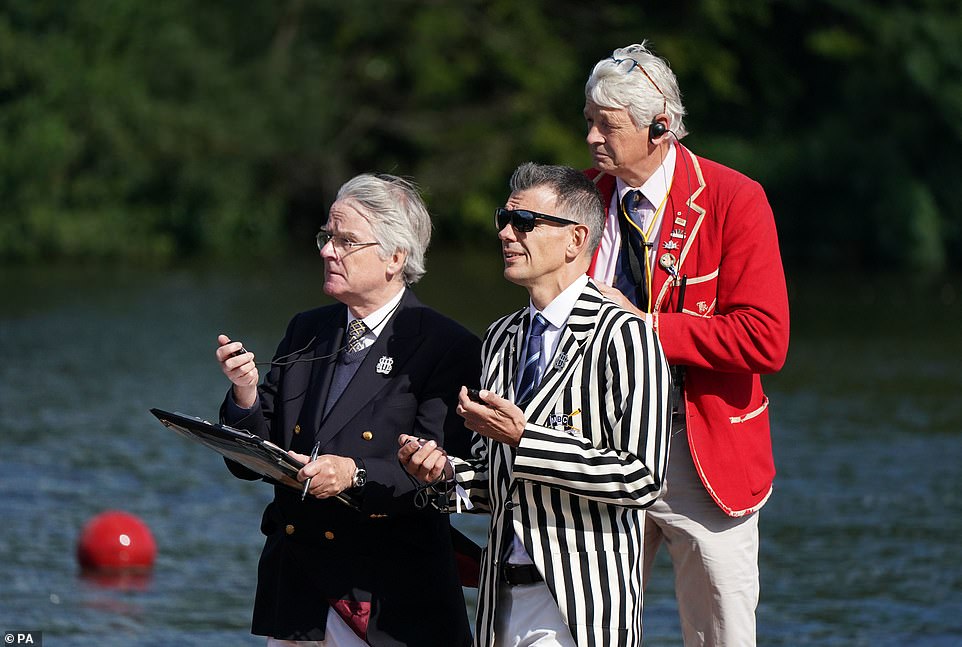 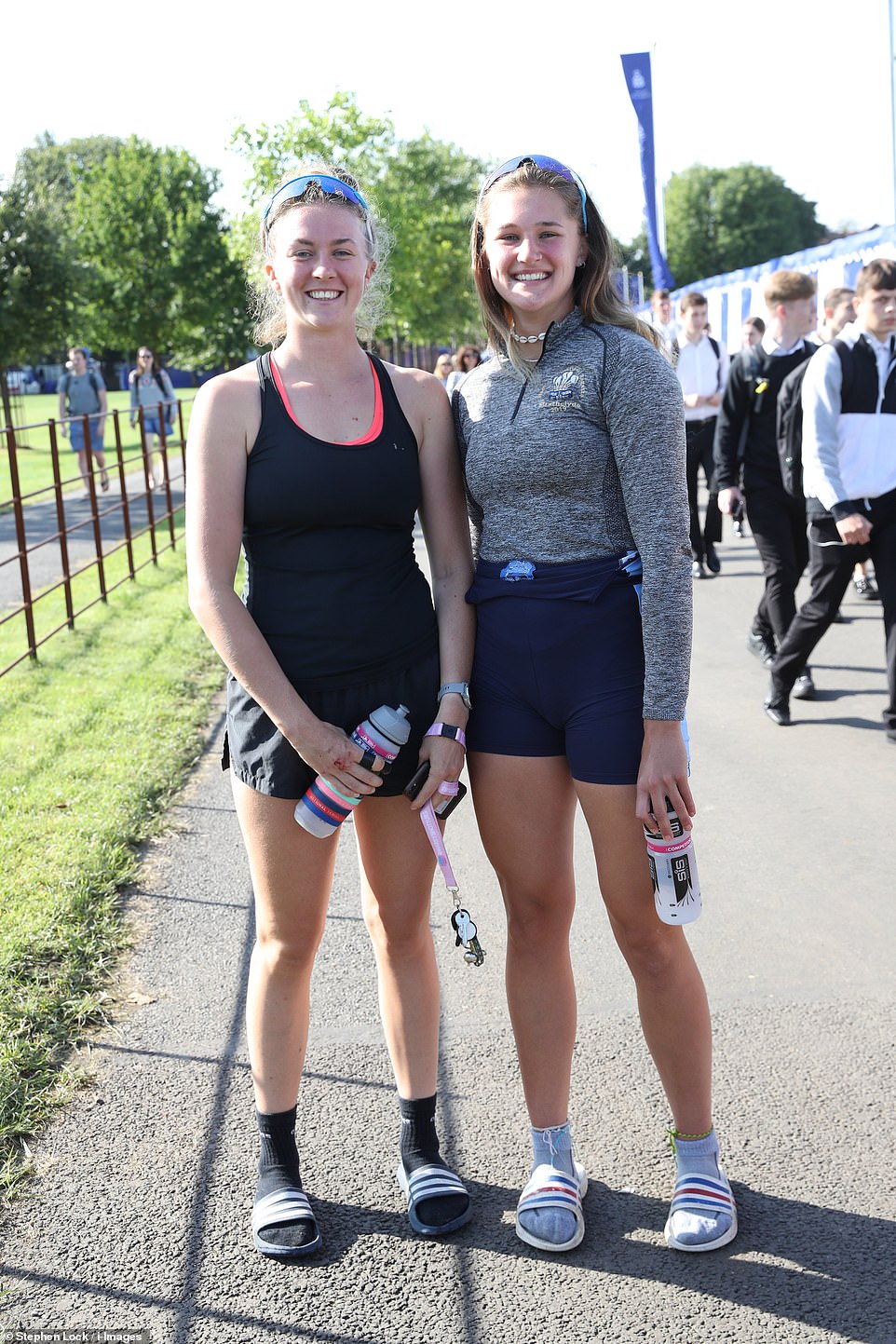 This year sees a new enclosure for friends and family of the competitors, pictured above, which is called The  Supporters’ Lawn 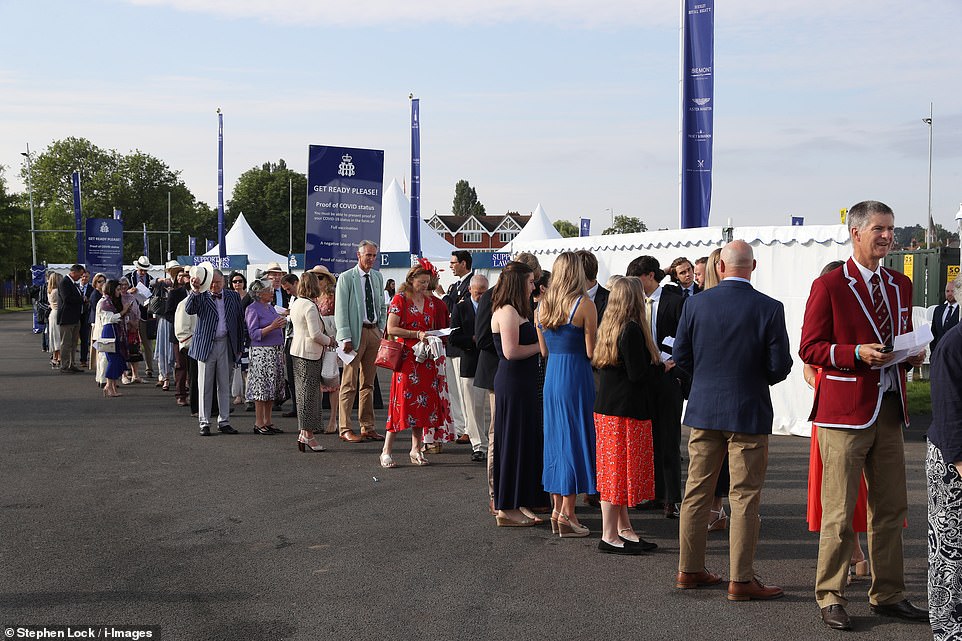 Well, we do love a queue. Those attending today’s races pictured arriving at the regatta – each must prove they’re ‘Covid safe’ before going through to the riverside 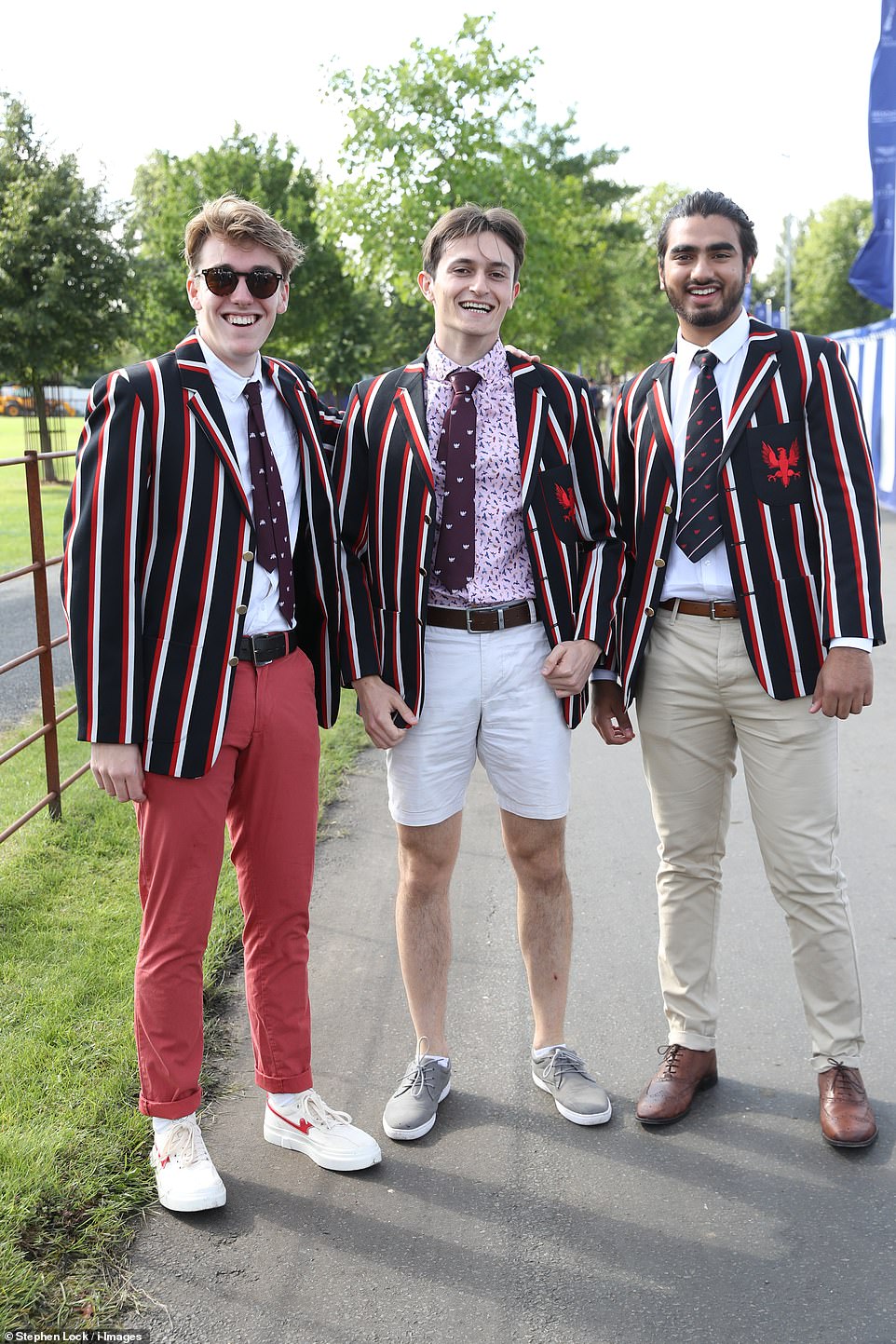 Many of the gents also adopted a more casual look, with shorts and colourful trousers, teamed with sneakers and boat shoes a popular look

‘It is not a major change by any stretch of the imagination but we still see the regatta as an excuse to dress up like you would for any other celebration.

‘If you see the regatta as a social occasion, as I do, people like to dress up and that is what Henley is all about – colour and celebration.’

The move has given a boost to women’s clothes shops in the town. Ailsa Meredith, a style advisor at Whistles in Bell Street, said: ‘Some women don’t want to be typically dressed.

‘Going in something unexpected is nice and a way to show your bold personality.’

Georgina Grant, the Oxford student and member of the University Women’s Boat Club rower who last year launched a petition calling for the rule change, said: ‘The petition led to a lot of attention being paid to the dress code and got people talking. 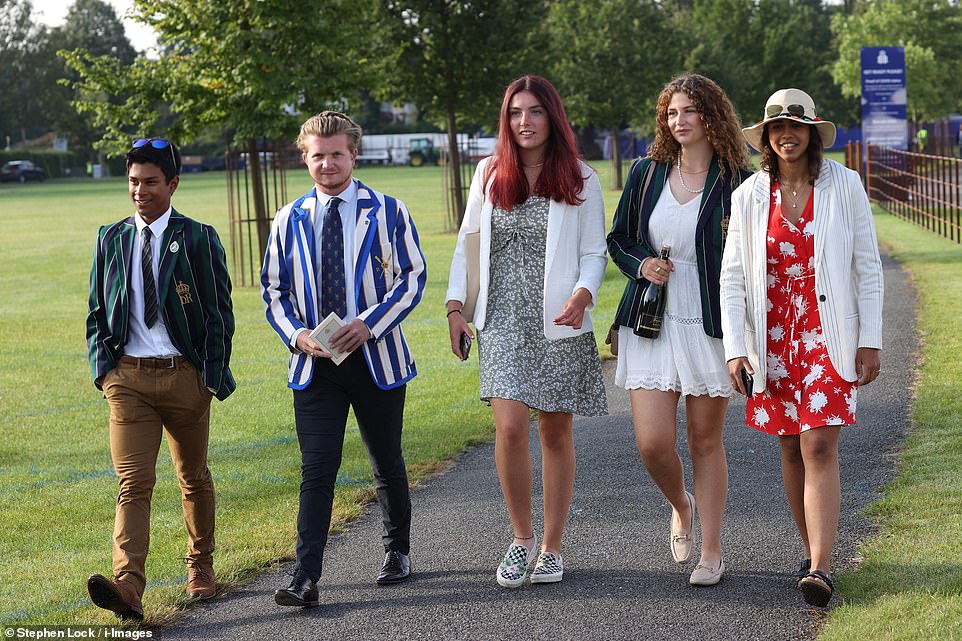 Colourful blazers, often showing the club the spectator rows for, were a common sight in the town this morning 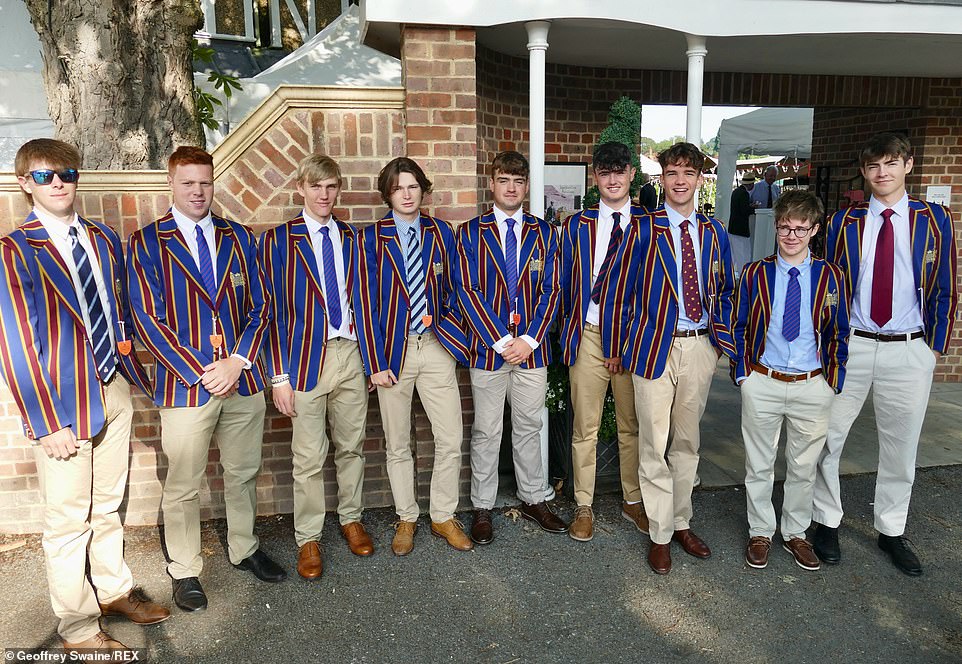 Call us old fashioned: Many stuck to the original dress code, opting for trousers, blazers and smarter shoes

‘I’m really pleased Henley has taken a step into the present on this. The trouser ban is symbolic of an era when women couldn’t compete and were just there to look pretty.’

In her online petition, which got more than 1,680 signatures, she declared ‘On the water, men and women dress the same. Why are things any different off the water?

‘To promote equality for competitors at this event, an equal dress code for spectators is the first place to start.

‘This dress is oppressive and serves no purpose. A smart and formal atmosphere can be maintained without the shackles of lengthy hemlines.’

The Henley Royal Regatta attracts thousands of visitors over the course of the five-day event. Teams compete in over 300 races of an international standard on the Thames, which can include Olympic rowers as well as crews new to the event.

It was first staged in 1839 and has been held annually every year since, except during the two World Wars and 2020 due to Covid-19. 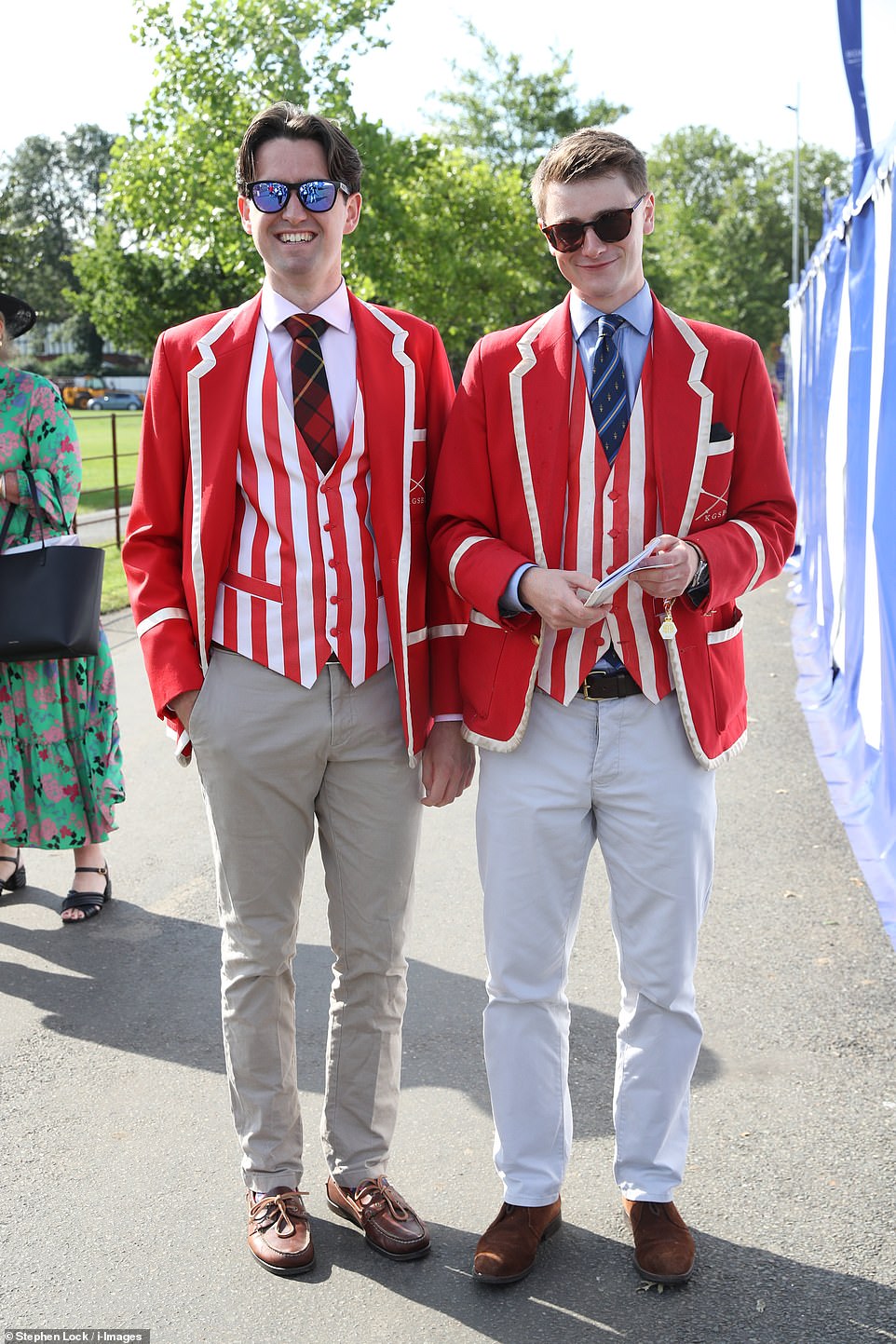 Bring out the waistcoat: But with a warm day ahead forecast in Henley, those wearing more traditional clothes may disrobe later on 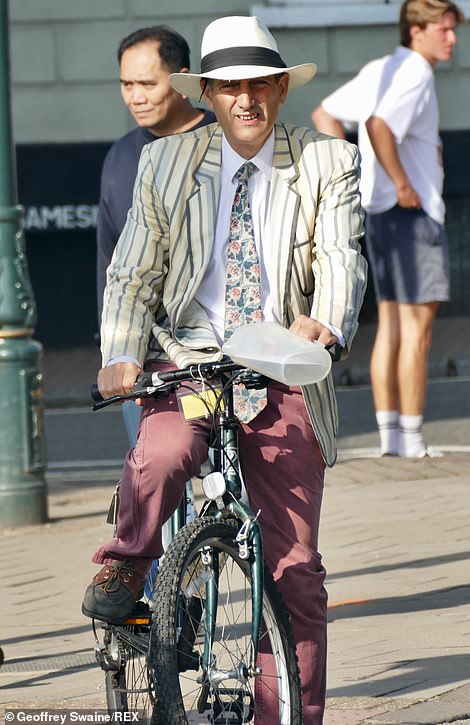 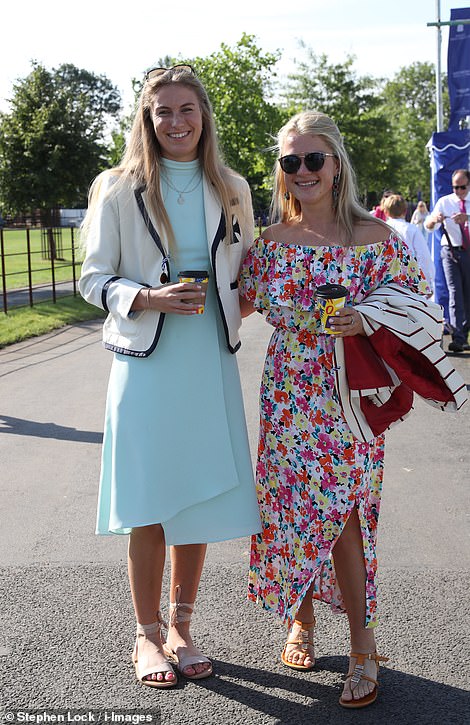 There were still plenty of racegoers respecting the dress code that was relaxed earlier this week, with longer dresses and boaters among the attire on display

Glamour: A regatta-goer dons a striking pink jacket over a floral cream dress with platform espadrilles. Right: This lady matches her blazer with a dress in the same shade of racing green 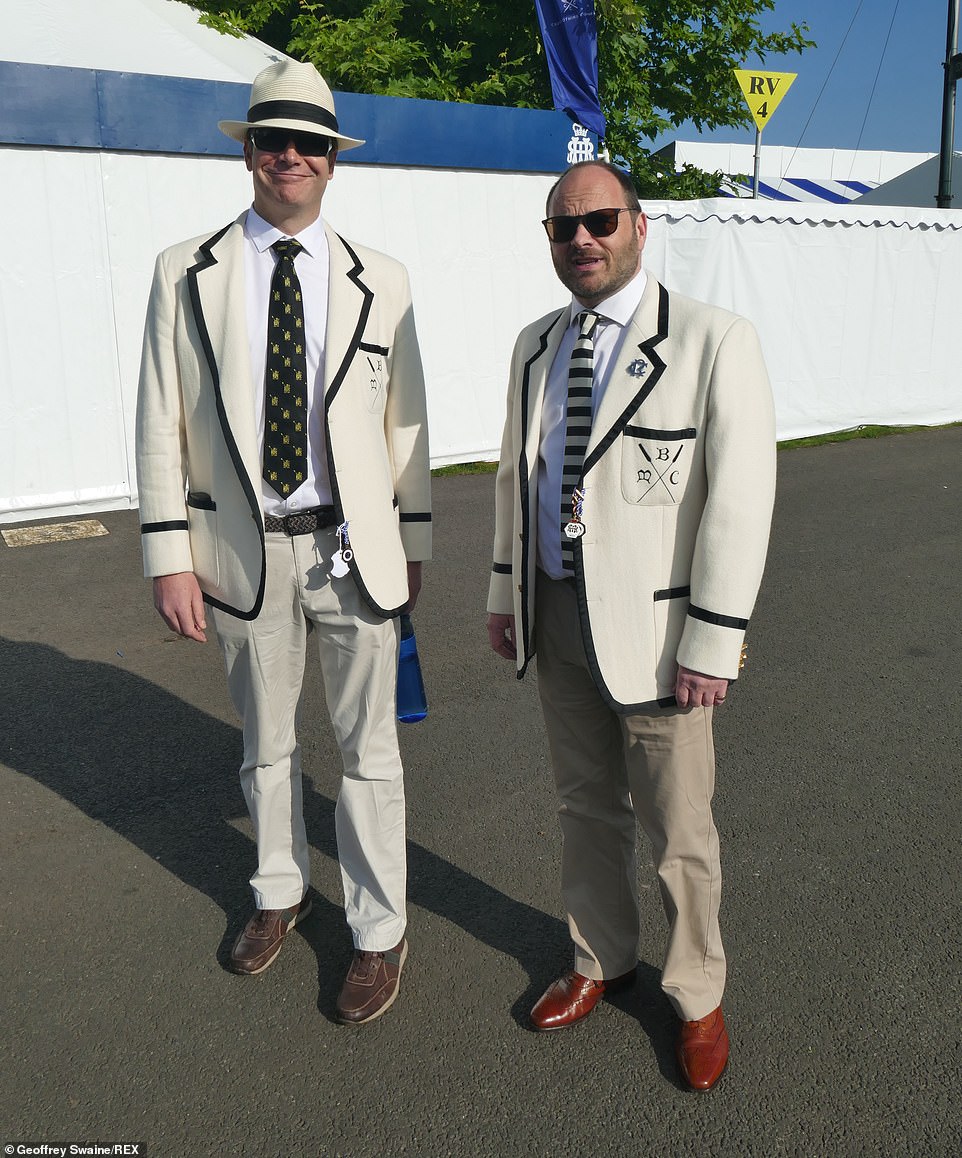 Traditional: Racing green and a shade of cream were the order of the day for these two smart attendees

The five days of rowing will take place almost two months later than normal following the lifting of restrictions on large gatherings.

The number of spectators will still be hugely down and the infrastructure has been changed so there will be no grandstand in the stewards’ enclosure and no regatta enclosure while the boat tent has been moved to the opposite bank to usual.

Spectators will be encouraged to wear masks in all indoor spaces, such as the on-site shops and restaurants.

A total of 481 crews – 41 from overseas – will take part in the regatta, which will begin on Wednesday and end with 26 finals, including three new ones for women on the Sunday.

Sir Steve said it was ‘tremendous’ to be able to hold the event, which is one of key dates in the social and sporting calendar.

‘It was traumatic last year to have to pull it and it has been a hard 12 months to get to where we are.

‘Public health has absolutely been high on the agenda for the whole world, not just us at Henley, but we wanted to stage a regatta for the rowers if we possibly could.

‘With the way that things have opened up in the last few weeks, it seems that we have made a good decision to stage it.’ 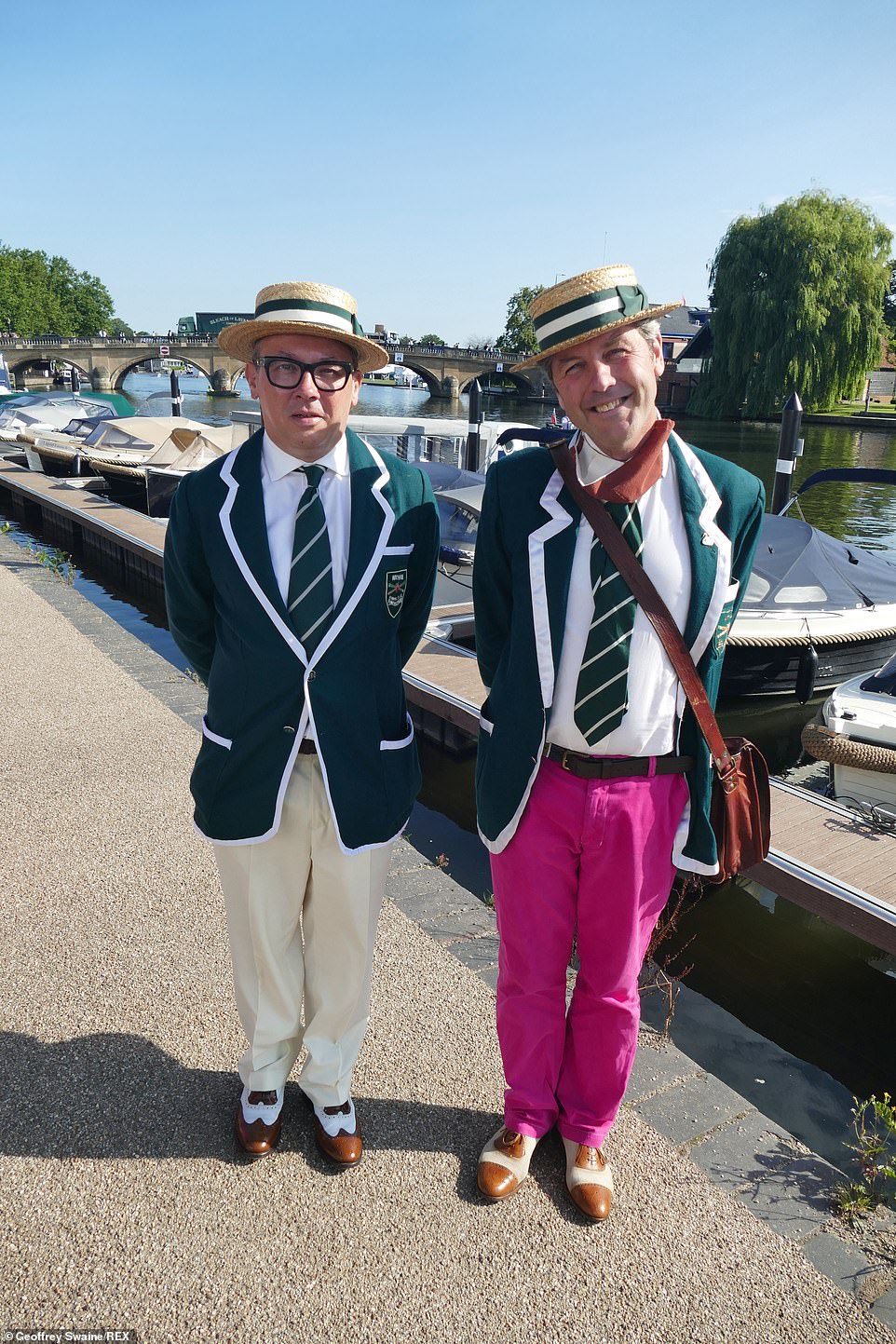 In the pink: Two gents arrive in their finery, including a very loud pair of trousers and some beautiful brogues 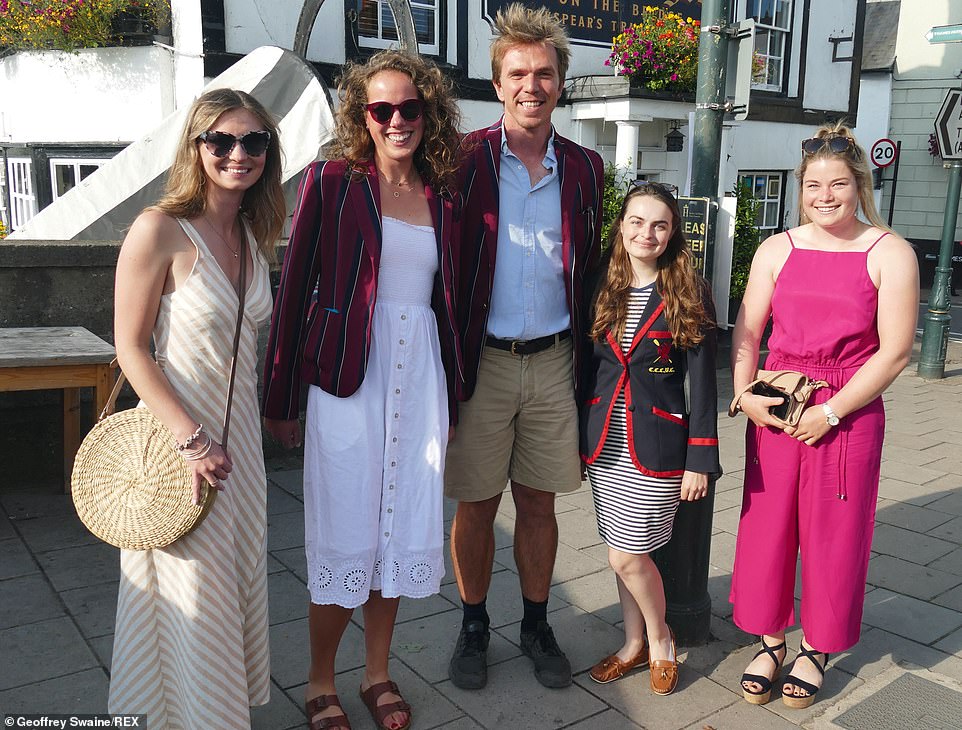 The Regatta has ruled it will hold the event as safely as possible, in line with Government and Public Health. Pictured: attendees at the event on Wednesday 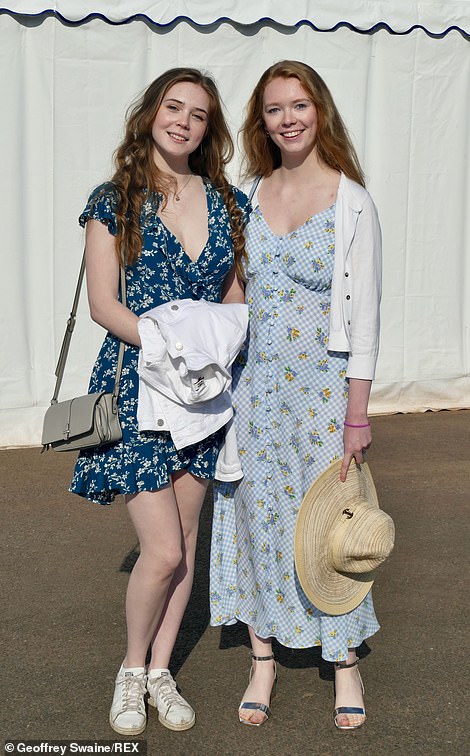 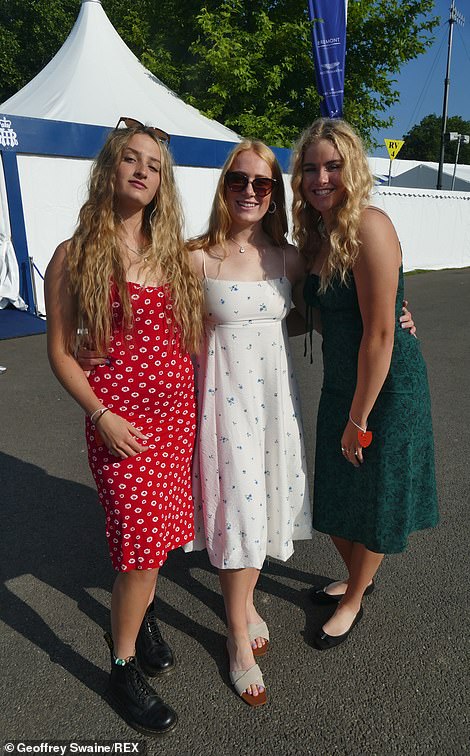 The dress code has been updated for the first time to permit women to wear trousers with a blazer or jacket. Previously women were required to wear a dress or skirt with a hemline below the knee

Sir Steve said the smaller number of visitors to the enclosures would impact the regatta’s finances but it was important that it went ahead.

‘We were prepared to run it behind closed doors with no spectators, which made the planning and structure very different.

‘We knew we wanted to put in the full course but this is expensive and to cover our costs we need members and guests to come along. If we don’t get those numbers then we are going to have a financial hit.

‘August is holiday season so we know we are not going to get full enclosures but, in some ways, it is about getting back to normal. At this stage we don’t know how many people will come along.’