The controversial culling of beloved alpaca Geronimo began with a stand-off on Thursday as its owner denied government claims that she vowed to euthanise the animal herself following a years-long legal battle.

A spokesperson for the Department for the Environment, Food and Rural Affairs (Defra) said Helen Macdonald, 50, indicated the animal would be euthanised today by her private vet on the farm in south Gloucestershire.

It said the Animal and Plant Health Agency (APHA) would then collect the animal so that it can be disposed of safely and so that a post-mortem examination can be undertaken.

However Miss Macdonald denied making any such promise and said she would not be making any arrangements to have her black-furred animal killed.

It comes after actress Joanna Lumley and naturalist Chris Packham called on ministers to grant the stud from New Zealand a last-minute reprieve this week.

Meanwhile a petition demanding the prime minister step in has gathered more than 75,000 signatures. 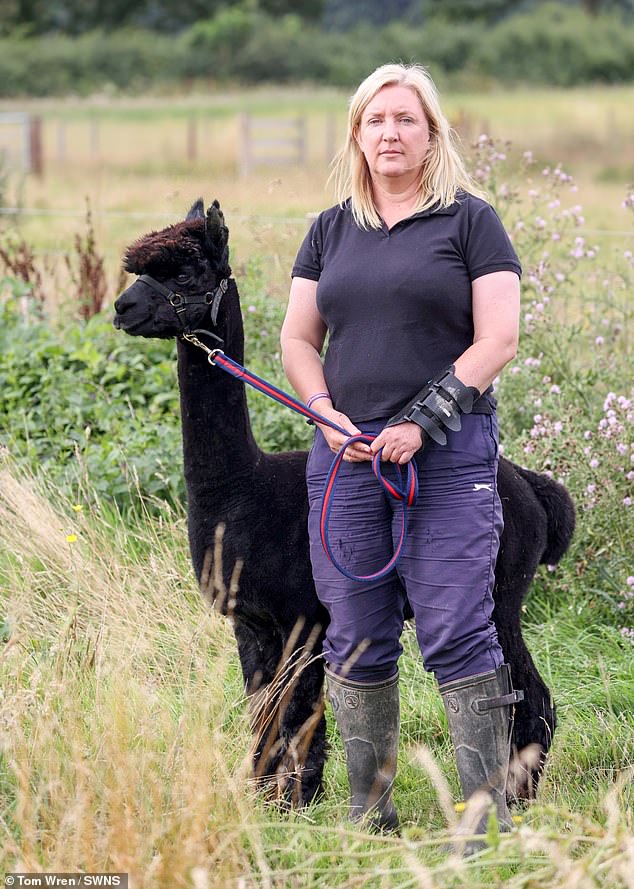 Helen Macdonald, 50, fears staff from the Department for the Environment, Food and Rural Affairs (Defra) will turn up at her farm at ‘any minute’ to slaughter Geronimo (Pictured: Miss Macdonlad with Geronimo Thursday)

Miss Macdonald lost her final attempt in the High Court this week to save Geronimo from slaughter after he twice tested positive for bovine tuberculosis (bTb).

She has always disputed the results, claiming Defra relied ‘doggedly on flawed science.’

But the government body was defiant today, saying that while it ‘sympathised’ with Miss Macdonald’s situation, ‘we need to do everything we can to tackle this disease.’

The High Court ruling means Geronimo could be killed from today, as a new warrant calling for his death takes effect.

The ‘kill window’ is open for 30 days and Miss Macdonald has now issued a last ditch bid for a late reprieve before it is too late.

Miss Macdonald today called for Boris Johnson to step in and stop the execution.

She said: ‘I want to hear from George Eustice or Boris himself.

‘The least they can do is justify their position.

‘From today if I haven’t had him put down, they are now allowed to come here and shoot him.

‘But I’ve not agreed to do anything – I’ve asked for them to stop this and do another test.

‘They haven’t responded, I haven’t heard anything from them. 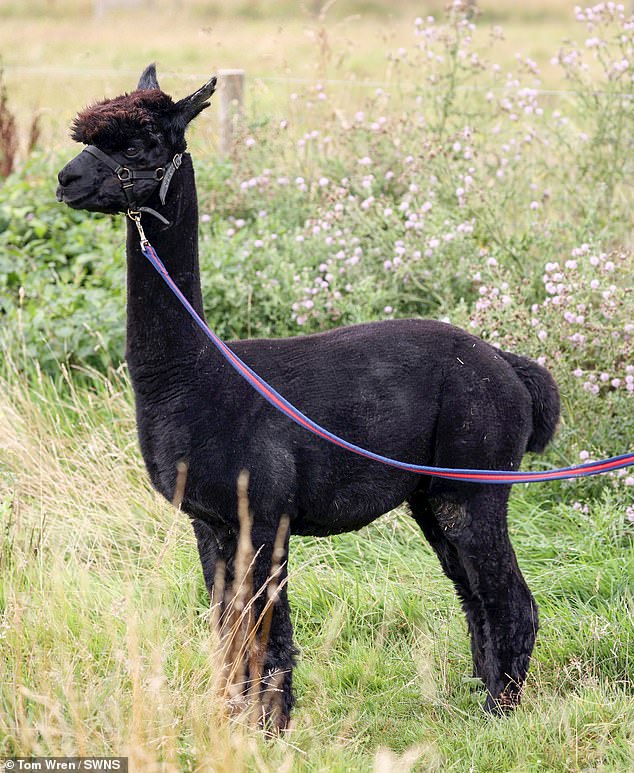 The ‘kill window’ is open for 30 days and Miss Macdonald has now issued a last ditch bid for a late reprieve before it is too late (Pictured: Geronimo on the day the ‘kill window’ opened)

‘Stressed and upset’: Geronimo’s Facebook account, run by Miss Macdonald says it is ‘grateful for all the support’

‘They know this is wrong and they’re hiding behind this wall and the law is as it stands.

A post from Geronimo’s Facebook account, run by Miss Macdonald, read today: ‘Stressed and upset to find ourselves in this awful situation but so very grateful for all the support from everywhere!’

The veterinary nurse, who breeds the species at her farm in Wickwar, south Gloucestershire, has been locked in a legal battle with Defra since 2017.

A Defra spokesperson said today: ‘We are sympathetic to Ms Macdonald’s situation – just as we are with everyone with animals affected by this terrible disease.

‘It is for this reason that the testing results and options for Geronimo have been very carefully considered by Defra, the Animal and Plant Health Agency and its veterinary experts, as well as passing several stages of thorough legal scrutiny.

‘Bovine tuberculosis is one of the greatest animal health threats we face today and causes devastation and distress for farming families and rural communities across the country while costing the taxpayer around £100m every year.

‘Therefore, while nobody wants to cull infected animals, we need to do everything we can to tackle this disease to stop it spreading and to protect the livelihoods of those affected.’

The defiant stance comes after celebrities joined the cause this week, taking to social media to drum up awareness and support.

Absolutely Fabulous star Ms Lumley said yesterday: ‘When in doubt, don’t. So please spare Geronimo, as there is real doubt hanging over this death sentence.’

He added: ‘If she refuses they’ll use a warrant, bring the police and force entry to kill a beautiful animal which is not diseased.’

Previously speaking outside the High Court last week, a sobbing Miss Macdonald said new evidence she brought to the table was denied, as the judge said it couldn’t take anything away from the previous positive tests.

She said: ‘He referred back to the previous judgment – essentially the judge had taken into account new evidence we put forward but concluded it didn’t overrule the previous high court judgement. 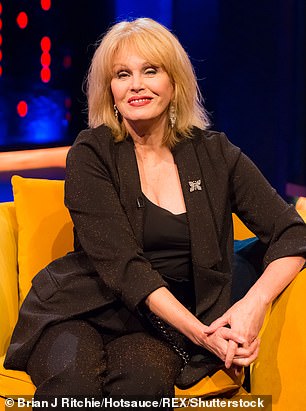 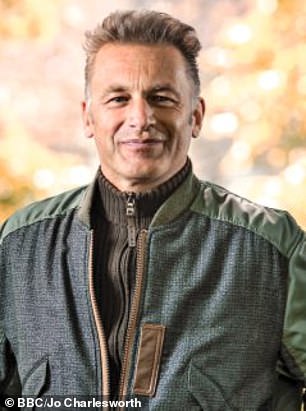 Joanna Lumley (left) and Chris Packham (right) are among those demanding ministers give a last-minute reprieve to eight-year-old Geronimo, who is believed to have bovine tuberculosis

‘They also said I didn’t have a right to obtain new evidence.’

On what evidence she brought forward she added: ‘The last two years of him being completely fit and healthy.

‘There’s vet examinations and other data about what happens to an alpaca when get Tb – they die very quickly.

‘They said it doesn’t take away from the fact they had two positive tests. So that’s enough for them to kill him.

‘So, there we are – four years of battle. We’ll just pick up the pieces of our lives and carry on.’

Helen previously lost a High Court appeal to challenge the environment secretary’s refusal to allow Geronimo to be re-tested in 2019.

It is illegal to test an animal without permission.

Geronimo has been in quarantine with five other alpacas on her farm in Wickwar, near Bristol since arriving in the UK in August 2017. 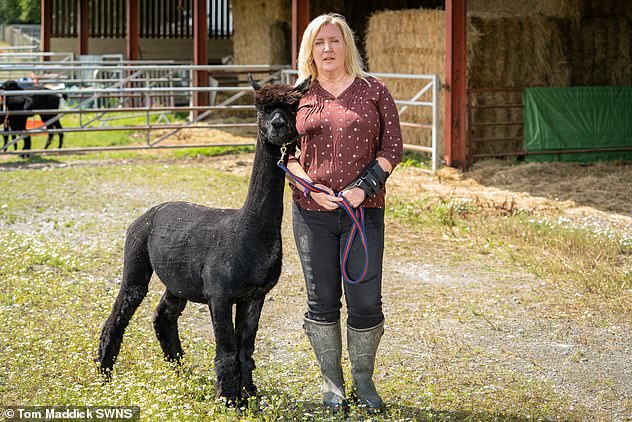 Geronimo the alpaca (pictured with his owner Miss Macdonald) twice tested positive for bovine tuberculosis on arrival from New Zealand in 2017, despite previously testing negative

The stud had tested negative for bovine TB in New Zealand but when Helen agreed to a voluntary test as part of national surveillance of the disease the result came back positive.

Defra decided to conduct a second test in November 2017, which also came back positive, and Geronimo was earmarked for slaughter.

In the past four years the restrictions enforced on her alpaca farm mean she has been unable to trade livestock or receive any income from it.

There is a legal requirement to report the disease if present or suspected in a herd, but there is no requirement for alpacas to be regularly tested.

Under The Animal Health Act 1981 Defra’s secretary of state only needs to suspect the disease is present to order the slaughter of animals and limit its spread.

The British Alpaca Society is calling for more research into the testing.

The society’s CEO, Duncan Pullar, said: ‘The system was put in place to test TB in cattle. There will be some false positives and some false negatives.

‘It’s frustrating that there are no learning opportunities as to why he is fit and healthy but has a failed test against his name.’