Europe is set to swelter in a 114F ‘heat dome’ this week as hot air from the Sahara engulfs large parts of the Mediterranean region and brings severe changes in atmospheric pressure.

The scorching weather, which has contributed to huge wildfires in Italy, Turkey, Algeria and Greece in recent days, could see temperatures soar to 114F in some regions as the hot air continues to push west toward the Iberian peninsula.

Today, Sicily’s agriculture-meteorological information service, SIAS, reported that a temperature of 119F was reached at the island’s Syracuse station – the highest temperature registered in the entire network since its installation in 2002.

Meanwhile Spain‘s weather service recorded a temperature of 116F in the Costa Del Sol and said mercury levels could also surpass 111F in other areas.

And Greek authorities warned the public to avoid unnecessary journeys as temperatures rose to 113F in some parts.

The highest temperature ever recorded on the European continent is 118F in 1977 in Athens. 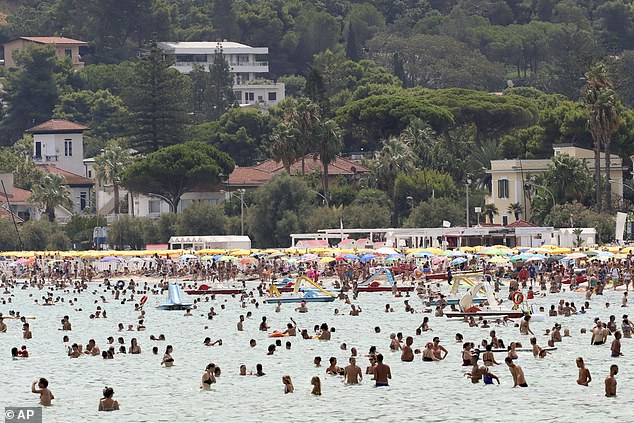 Europe is set to swelter in a 114F ‘heat dome’ as the scorching weather, which has contributed to huge wildfires in Italy, Turkey, Algeria and Greece in recent days,  continues to sweep across the region. Pictured: Sun-seekers on a beach in Palermo, Sicily, today 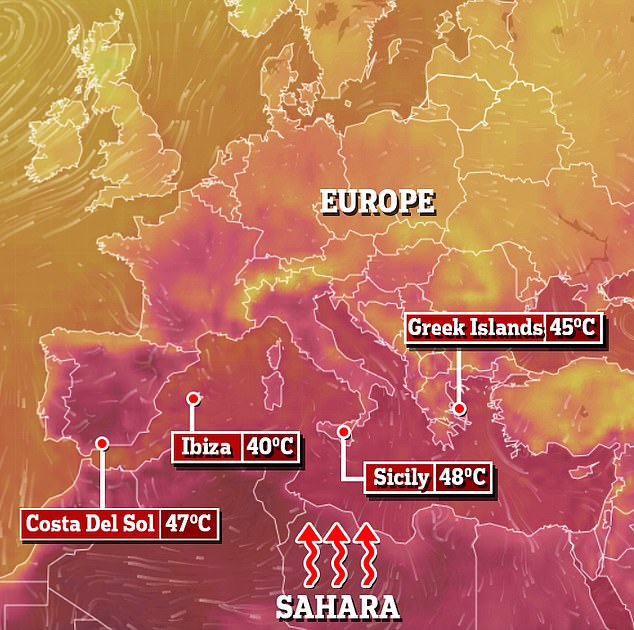 Today, Sicily’s agriculture-meteorological information service reported a temperature of 119F was reached at the island’s Syracuse station while Spain’s weather service said temperatures could surpass 111F in some areas this week. It comes as hot air from the Sahara engulfs large parts of the Mediterranean region

As the temperatures across Europe continue to rise, lead forecaster at Severe Weather EU, Marko Korosec, said a ‘more intense heatwave is expected to develop for Spain and Portugal’ later this week.

He said: ‘Towards the weekend, the heat dome and the upper ridge is expected to expand also across the Iberian peninsula.

‘So a much more intense heatwave is expected to develop for Spain and Portugal. The baking hot temperatures will already begin in Thursday over Spain, reaching up to around 42C (107F) in the southern parts and up to 39C  (102F) in southern Portugal.

‘Coming into Friday, the heatwave significantly ramps up as much warmer air mass advects farther north and west across the Iberian peninsula.’

Today, Portugal’s prime minister António Costa warned that the hot weather would increase the threat of wildfires, which in 2017 killed more than 100 people in the country.

Mr Costa urged people to take special care amid the scorching weather and wildfire danger, adding that many wildfires start with careless behaviour.

He also said said ‘the terrible images’ from Greece and Turkey in recent days brought back Portuguese memories of 2017.

‘We don’t want to see that scenario here again,’ Mr Costa said in a videotaped message at his official residence.

Meanwhile Spain weather service, AEMET, said ‘the maximum and minimum temperatures will reach levels far above the normal for this time of the year’.

Issuing a heat warning, a spokesperson for Spain’s weather service AEMET said: ‘Mainland Spain and the Balearic Islands are facing a probable heatwave.

‘This could lead to adverse effects on people’s health and to a significant risk of forest fires.’

While peaks in temperature are not unheard of in Spain and Portugal during the summer months, climate scientists say there is little doubt climate change from the burning of coal, oil and natural gas is driving extreme events, such as heat waves, droughts, wildfires, floods and storms. 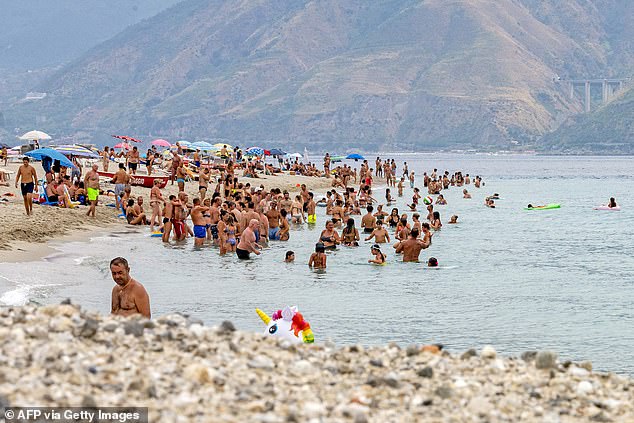 People enjoy the sea during a hot summer day in Messina, Sicily, as the continent braces a heatwave 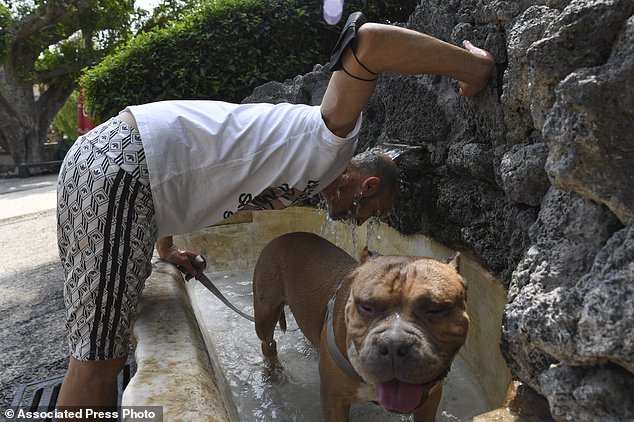 A man and his dog refresh in a fountain of Catania, Sicily, Southern Italy, today as mercury levels continue to rise 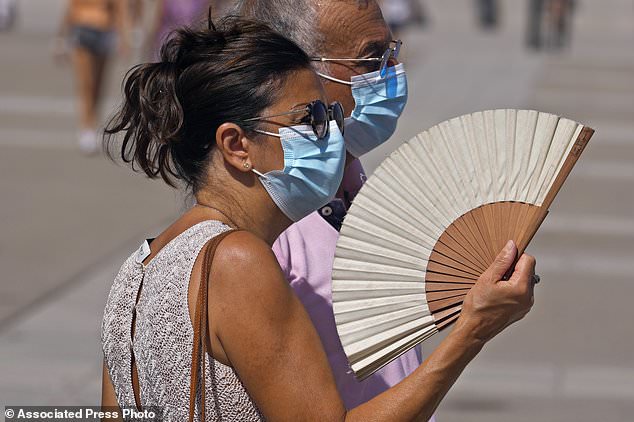 A woman fans herself in Madrid, Spain, Tuesday, as temperatures begin to rise at the start of an oncoming heatwave 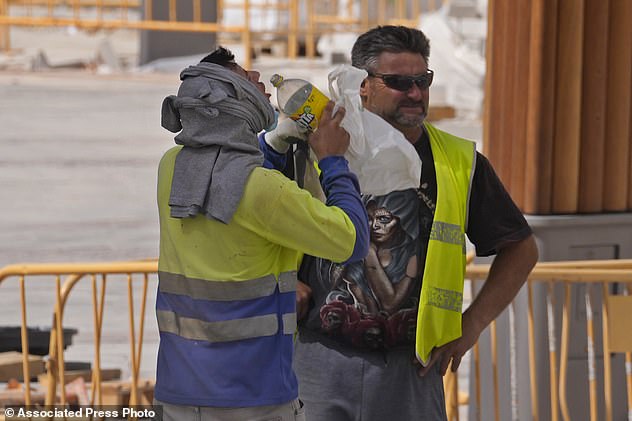 Workers on a construction site stop to have a drink in Madrid, Spain, as Europe roasts in a hear dome 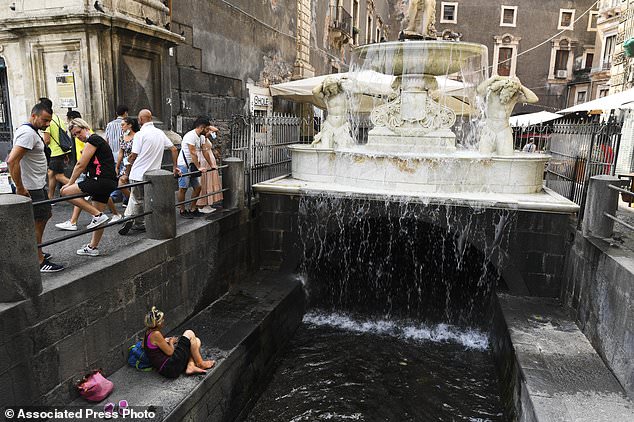 A woman sits near a fountain in a street of Catania, Sicily, Southern Italy, as the country faces a heatwave 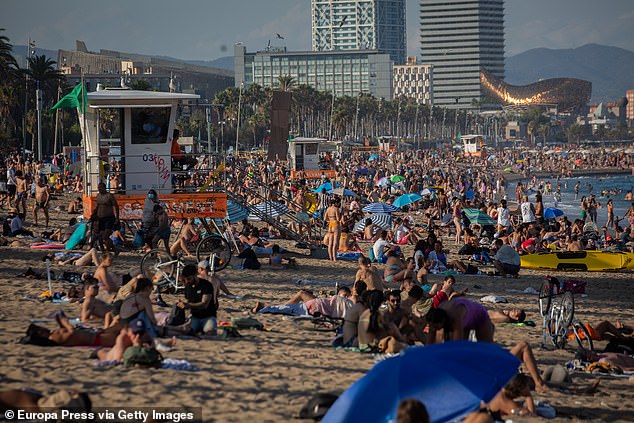 Researchers can directly link a single event to climate change only through intensive data analysis, but they say such calamities are expected to happen more frequently on our warming planet.

Meteotsunamis are similar to tsunamis but are not triggered by seismic activity on the ocean floor.

Instead, meteotsunamis are driven by air-pressure disturbances linked with fast-moving weather events, like severe thunderstorms.

The storm front generates the wave, which moves towards the coast, where it is amplified by a shallow continental shelf, inlet or bay.

Scientists are only just starting to understand meteotsunamis but waves of 6ft (1.8m) or more have already been observed.

Meteotsunamis occur in a number of places around the world, including the Great Lakes, Gulf of Mexico, Atlantic Coast, Mediterranean and Adriatic Seas.

Identifying a meteotsunami presents a unique set of challenges to scientists, since the characteristics of these waves are so similar to other meteorological phenomenon, including tsunamis.

It can also easily be confused with wind-driven storm surges or a seiche, which is a standing wave in an enclosed or partially enclosed body of water.

These uncertainties make it difficult to predict a meteotsunami and warn the public of a potential event.

Scientists are working to pinpoint the exact conditions which are most likely to generate a meteotsunami in an effort to improve advance warnings.

The surge in heat comes after the holiday resort of Alicante was hit by a meteotsunami which flooded streets and beaches and damaged cars after the severe changes in atmospheric pressure.

Santa Pola was hit overnight on Wednesday by the freak weather incident, called a rissaga in Catalan Spanish.

These are large, tsunami-like waves are triggered by severe changes in atmospheric pressure caused by fast-moving weather events, such as a heatwave.

Pictures showed the beach covered with white wash and water lapping over the promenade and around cars on nearby streets.

The Department of Climatology of the University of Alicante said the rare phenomenon was more common around the Balearic Islands, but had happened in Alicante before – though this was much stronger than usual.

The scenes came after the UN on Monday published a damning report warning the world is already experiencing the effects of climate changes – and that they are set to get rapidly worse.

The report, which as been dubbed a ‘code red for humanity’, said the Earth is likely to warm by 1.5C within the next 20 years — a decade earlier than previously expected — and heatwaves, flooding and droughts will become more frequent and intense.

Scientists had expected temperatures to rise by 1.5C above pre-industrial levels between 2030 and 2052 but now believe it will happen between this year and 2040.

Since 1970, global surface temperatures have risen faster than in any other 50-year period over the past 2,000 years, the authors said, while the past five years have been the hottest on record since 1850.

‘It’s just guaranteed that it’s going to get worse,’ said report co-author Linda Mearns, a senior climate scientist at the US National Center for Atmospheric Research. ‘I don’t see any area that is safe… Nowhere to run, nowhere to hide.’

However, some experts say there is still hope that cuts in emissions of greenhouse gases could stabilise rising temperatures.

Scientists involved in the report said the 1.5C or 2C thresholds are not cliff edges the world will fall off, but that every bit of warming makes a difference, so it is important to curb temperature rises as much as possible.

Professor Richard Betts, from the Met Office Hadley Centre and a contributing author to the report, said: ‘Like the speed limit on a motorway, staying below it is not perfectly safe and exceeding it does not immediately lead to calamity, but the risks do increase if the limit is passed.

‘Limiting warming to 1.5C clearly needs much more urgent emissions cuts than is currently happening, but if the target is still breached we should not assume all is lost and give up – it will still be worth continuing action on emissions reductions to avoid even more warming.’ 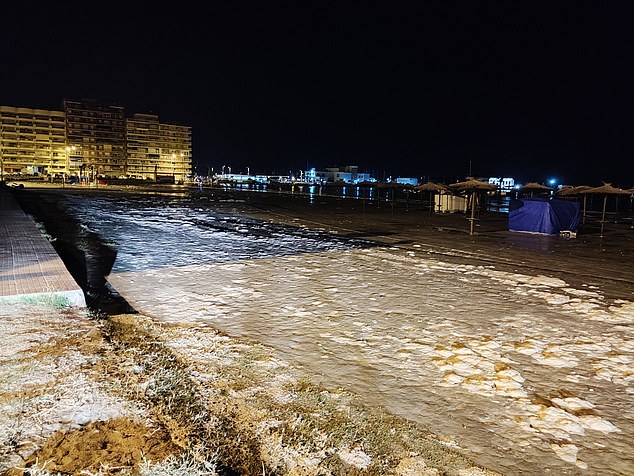 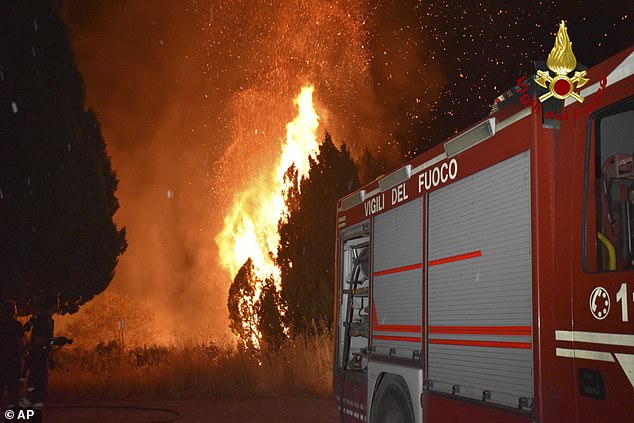 Italian firefighters race to a wildfire near Petralia Soprana, near Palermo, Sicily, as mercury levels rise 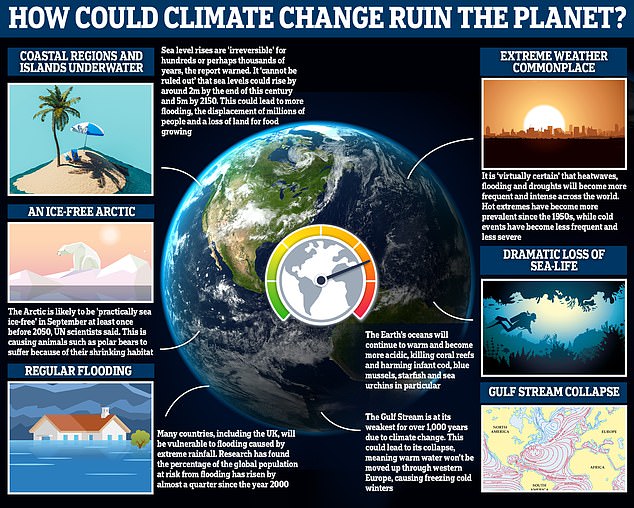 If temperatures continue to rise, there could be devastating effects here on Earth, including a dramatic loss of sea-life, an ice-free Arctic and more regular ‘extreme’ weather

He said in a statement: ‘We can’t wait to tackle the climate crisis. The signs are unmistakable.

The science is undeniable. And the cost of inaction keeps mounting.’

He warned: ‘The alarm bells are deafening, and the evidence is irrefutable: greenhouse gas emissions from fossil fuel burning and deforestation are choking our planet and putting billions of people at immediate risk.’

And Anthony Blinken, US Secretary of State, said in a statement: ‘Today, the United States joined nearly 200 IPCC member governments in approving the Working Group I contribution to the IPCC’s Sixth Assessment Report.

‘The report finds we are already edging closer to a 1.5 degrees Celsius [2.7F] warmer world, and every day emissions rise the prospects for averting the worst impacts of climate change become dimmer.

‘This is why it is essential that all countries – in particular the major economies –do their part during this critical decade of the 2020s to put the world on a trajectory to keep a 1.5 degrees Celsius [2.7F] limit on warming within reach.

‘This is why the United States has committed to a 50-52 percent reduction in emissions from 2005 levels in 2030 and is marshaling the entire federal government to tackle the climate crisis. We cannot delay ambitious climate action any longer.’