Covid infections have fallen by two per cent in a week as Department of Health bosses reported a further 26,750 infections today, a drop from the 27,288 reported last Sunday.

Meanwhile fatalities dropped by 29 per cent from last week after it was announced that another 61 people had died from the virus today – bringing the total death toll to 130,953.

The latest death figure marks a drop from last Sunday when 86 deaths were recorded in Britain.

They are also lower than yesterday’s death figure which saw the number of daily deaths reach 93.

The all-settings figures – which covers cases in care homes, hospitals and the wider community across the home nations – come as No10’s top scientific advisers claimed England’s R rate has dipped below one for the first time in three months. 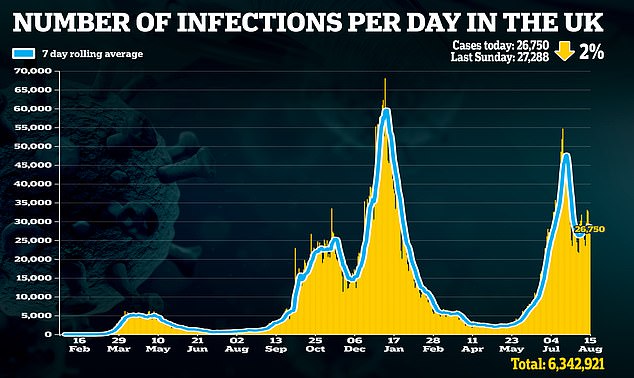 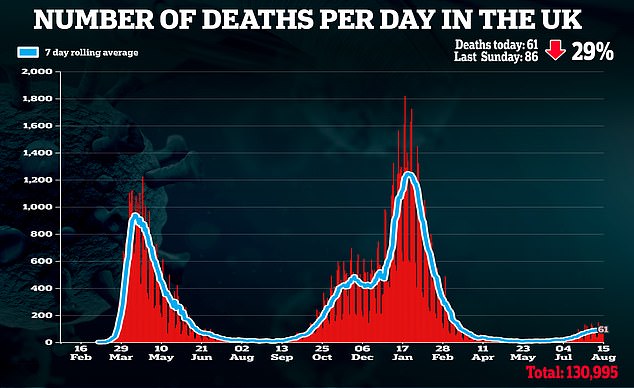 The UK Health Security Agency estimates the reproduction rate, which reflects how quickly the virus is spreading, is between 0.8 and 1.0. Last week’s figure was thought to be as high as 1.1.

But it is a lagging indicator and reflects the situation the country faced three weeks ago, when Covid cases began to shrink naturally. Since then, however, the outbreak has started to tick upwards once again, which some experts have blamed on the delayed effects of ‘Freedom Day’.

This week the Office for National Statistics, which carries out tens of thousands of random swab tests, said one in 75 people were carrying the virus on any given day in the seven-day spell ending August 6.

This was the equivalent of 726,700 people and was up slightly on the week before, suggesting the dip in infections seen throughout the end of July was only a temporary blip.

While the proportion of people testing positive in England ‘continued to be high’ at around 1.32 per cent, the ONS estimates suggest an ‘overall decreasing trend over the past two weeks’.

But the figures come amid fears that this weekend will pose one of the biggest ‘tests’ since last month’s Freedom Day, with 1.7million people expected to attend mass gatherings to watch sporting events and music festivals – the largest number since the first lockdown last March.

Crowds will gather in the largest numbers for Premier League matches, England’s cricket match against India at Lord’s and the Edinburgh Fringe festival.

UKHSA’s estimate of the R rate suggested the figure may be as low as 0.8 in every region of the country.

But it may still be above one in the East of England and the South West, according to the weekly update.

If the figure — the average amount of people every infected patient passes the virus on to — is below one, it means infections are shrinking.

The R rate is, however, a lagging indicator and does not reflect the situation currently because it is based on a wide mix of data, including deaths – which reflect how quickly the virus was spreading weeks before.

Ministers once put the R rate at the heart of their Covid battle plan.

But it is now less crucial because scientists care more about both hospitalisation and death rates, given the country’s massively successful vaccination roll-out. 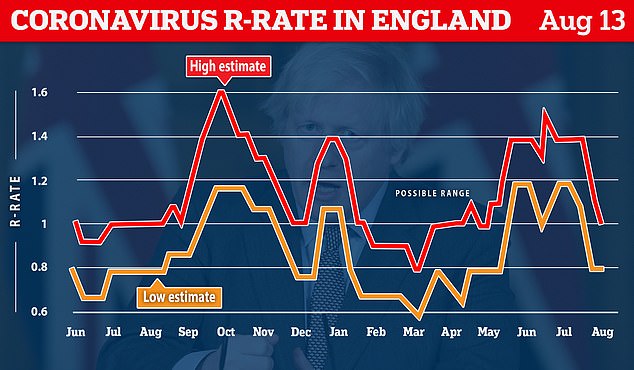 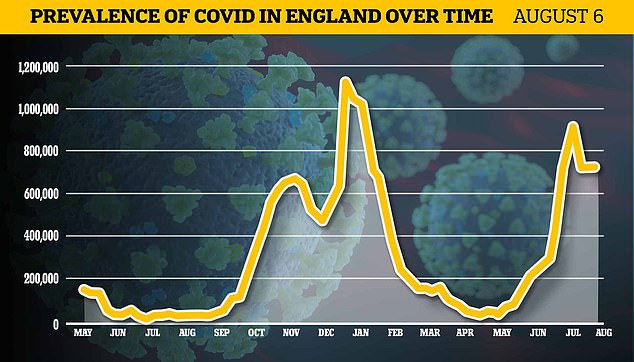 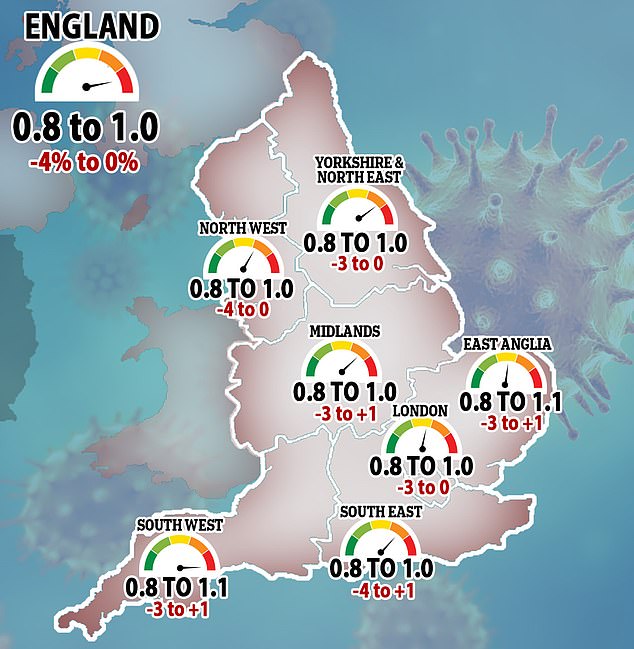 Meanwhile, the gold-standard ONS data – which is used by ministers to track the state of the outbreak – showed infection levels in England had started to level off again.

Covid was most prevalent in Northern Ireland, with one in 55 people (1.88 per cent) infected on any given day last week.

Scotland saw a drop in people testing positive, with one in 190 people having the virus (0.53 per cent).

Infection levels stayed low in Wales, where just one in every 220 people were infected (0.46 per cent). But the ONS statisticians claimed it was unclear whether cases were going up or down.

The proportion of people infected with Covid rose the fastest in 16 to 24-year-olds, where 3.2 per cent tested positive up to August 6, compared to 2.5 per cent the week before.

This week health secretary Sajid Javid said the Government aims to have offered a first dose of the Pfizer or Moderna vaccine to all those aged 16 and 17 by August 23 at walk-in centres across the country. 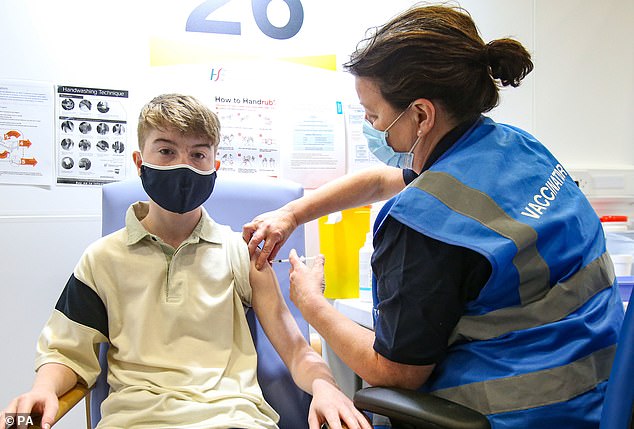 Kevin Mckeon, 14, receives his first dose of the Covid-19 vaccine from vaccinator Geraldine Flynn at the Citywest vaccination centre in Dublin

Writing in The Mail on Sunday, Mr Javid said the aim is to make sure that the teenagers are getting crucial protection against the virus before they head back to sixth forms or colleges.

He wrote: ‘I am delighted we’re able to take even more steps forward, by reinforcing our collective defences and easing additional restrictions that have governed our daily lives.

‘I didn’t come into Government to put curbs on who people can see and where they can go, and I look forward to the day when people don’t need to see me on TV so often, talking about the pandemic.

‘That is why I’m so glad we’ve been able to ease restrictions over the past few weeks and do so in a way that reflects the huge benefits that the vaccines bring.’