A 57-year-old British man suspected of spying for Russia and handing over documents in exchange for cash while working at the British Embassy in Berlin has been arrested in Germany, federal prosecutors said Wednesday.

The suspect identified only as David S., was arrested on Tuesday in Potsdam, west of Berlin, based on cooperative investigations by German and British authorities.

German prosecutors said the Briton is suspected of being a secret service agent and spying for the Russian intelligence service since at least November.

Before his arrest, he worked as a local hire at the British Embassy in Berlin and allegedly passed on documents he received at work to the Russians, the prosecutors said.

The suspect ‘on at least one occasion passed on documents he acquired as part of his professional activities to a representative of Russian intelligence,’ the federal prosecutor’s office said in a statement.

The Briton then received an unknown amount of cash in return, the statement said, adding that investigators have searched his home and office.

David S. had been monitored by security services for some time and it was not a ‘snap arrest’, according to Sky News. 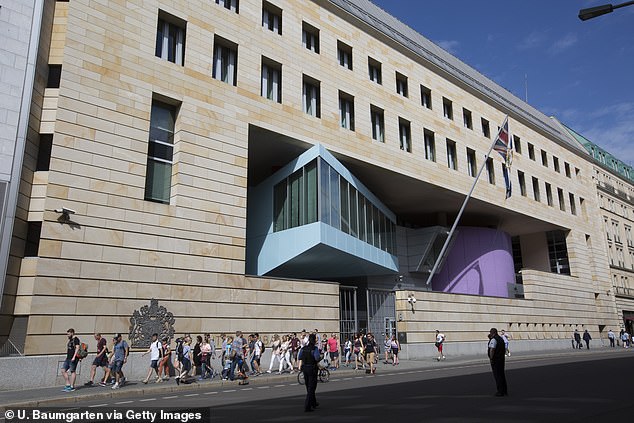 The suspect identified only as David S., is suspected of being a secret service agent and spying for the Russian intelligence service since at least November. Pictured: The British embassy in Berlin

David S. is to appear later Wednesday before an investigating judge who will decide whether he will be remanded in custody.

Russian authorities have not yet publicly commented.

The Briton’s arrest is the result of a joint investigation by the Metropolitan Police’s Counter Terrorism Command and their German counterparts.

The Met Police said in a statement: ‘A 57-year old British national was arrested by German authorities on Tuesday, 10 August, as part of a joint investigation between the Met’s Counter Terrorism Command and German counterparts.

‘The man was arrested in the Berlin area on suspicion of committing offences relating to being engaged in ‘Intelligence Agent activity’ (under German law).

‘The Met’s Counter Terrorism Command is responsible for investigating allegations and matters relating to alleged breaches of the Official Secrets Act.’

A Government spokesperson told MailOnline: ‘An individual who was contracted to work for the government was arrested yesterday by the German authorities.

‘It would not be appropriate to comment further as there is an ongoing police investigation.’ 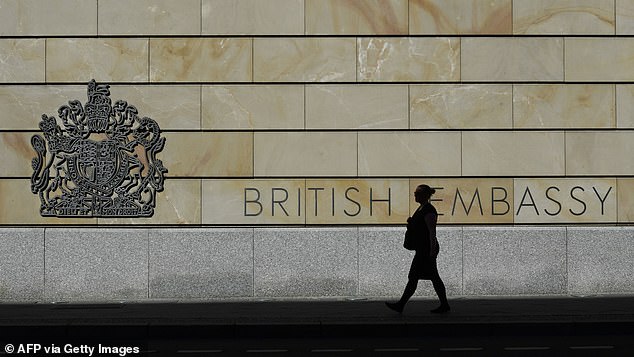 Germany has arrested a number of people in recent years accused of spying for Russia, but the capture of a suspect from a close ally is highly unusual.

In June, a Russian man who worked at a German university was arrested on suspicion of espionage for allegedly passing information to Russian intelligence, German prosecutors said.

The suspect, identified only as Ilnur N., was arrested and his home and workplace were searched.

Federal prosecutors said he worked as a research assistant for a science and technology professorship at a German university. They didn’t identify the university or specify where in the country he was arrested.

The man is accused of meeting at least three times with a member of a Russian intelligence service, which prosecutors didn’t identify, between October of last year and June. In two of those meetings, he is alleged to have handed over information on the university in exchange for an unspecified amount of cash.

And German prosecutors in February filed espionage charges against a German man suspected of having passed the floor plans of parliament to Russian secret services in 2017.

Moscow is at loggerheads with a number of Western capitals after a Russian troop build-up on Ukraine’s borders and a series of espionage scandals that have resulted in diplomatic expulsions.

In June, Italy said it had created a national cybersecurity agency following warnings by Prime Minister Mario Draghi that Europe needs to protect itself from Russian ‘interference’.

The move came after an Italian navy captain was caught red-handed by police selling confidential military documents from his computer to a Russian embassy official.

The leaders of nine eastern European nations in May condemned what they termed Russian ‘aggressive acts’, citing operations in Ukraine and ‘sabotage’ allegedly targeted at the Czech Republic.

Several central and eastern European countries expelled Russian diplomats in solidarity with Prague, but Russia has branded accusations of its involvement as ‘absurd’ and responded with tit-for-tat expulsions.

The latest espionage case also comes at a time of highly strained relations between Russia and Germany on a number of fronts, including the ongoing detention of Kremlin critic Alexei Navalny, who received treatment in Berlin after a near-fatal poisoning.

Relations between London and Moscow have been at a low point since the attempted poisoning of former spy Sergei Skripal in British Salisbury in 2018.

The Kremlin has denied any involvement in either case.

Chancellor Angela Merkel’s government has moreover worked to maintain a sanctions regime over Moscow’s annexation of the Crimean peninsula.

And Germany has repeatedly accused Russia of cyberattacks and cyberespionage on its soil.

Despite the frictions, Berlin has pressed ahead with plans to finish the controversial Nord Stream 2 pipeline, set to double natural gas supplies from Russia to Germany.

This is a breaking news story, more to follow…