An anti-vaxxer nightclub boss has died of Covid-19 after mocking people for getting the ‘experimental’ vaccine and warning of a ‘big pharma’ conspiracy in hundreds of Facebook messages.

David Parker, 56, passed away at Darlington Memorial Hospital in County Durham on Monday despite having no underlying health conditions.

He had contracted the virus just weeks after condemning the vaccine and pharmaceutical companies in social media posts.

The family of Mr Parker, who spent a decade working as the manager of Club Louis in North Yorkshire, are said to now be urging everyone to get the jab.

It follows John Eyers, a fit and healthy 42-year-old father with a love of rock climbing and bodybuilding, dying of Covid-19 last week after refusing the vaccine.

Cambridge University graduate Leslie Lawrenson, 58, also passed away at his home in Bournemouth on July 2, just nine days after releasing footage to Facebook explaining why Covid was ‘nothing to be afraid of’.

A further 86 deaths were recorded yesterday, similar to the 85 announced at the same time last week, bringing the UK total to 130,086.

Separate figures published by the Office for National Statistics show there have now been 155,000 deaths registered in the UK where Covid-19 was mentioned on the death certificate.

Meanwhile, the Government is continuing its battle to encourage take-up of the jab among young adults after it was extended to all over-18s in mid-June. Ministers are worried that three million under-30s are yet to have one. 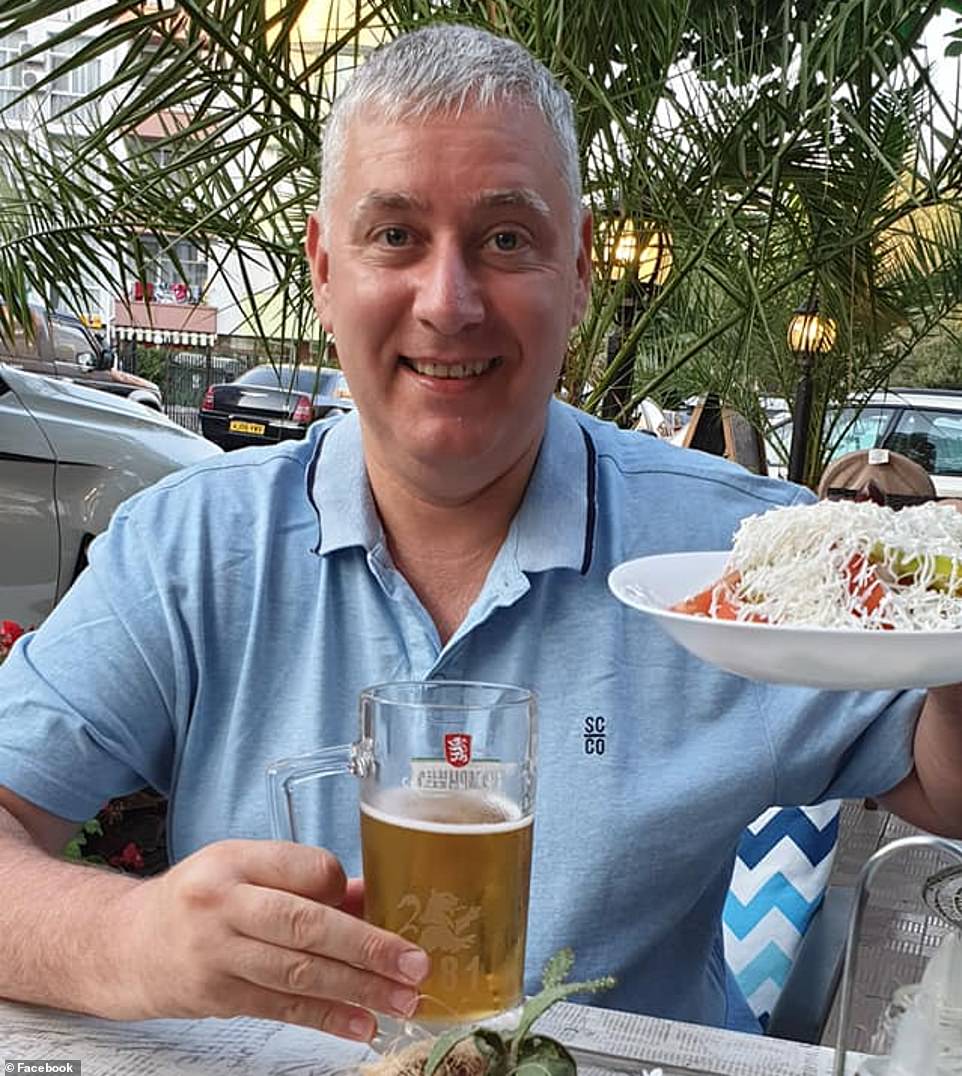 David Parker (pictured above), 56, contracted the virus and died at Darlington Memorial Hospital in County Durham on Monday, despite having no underlying health conditions 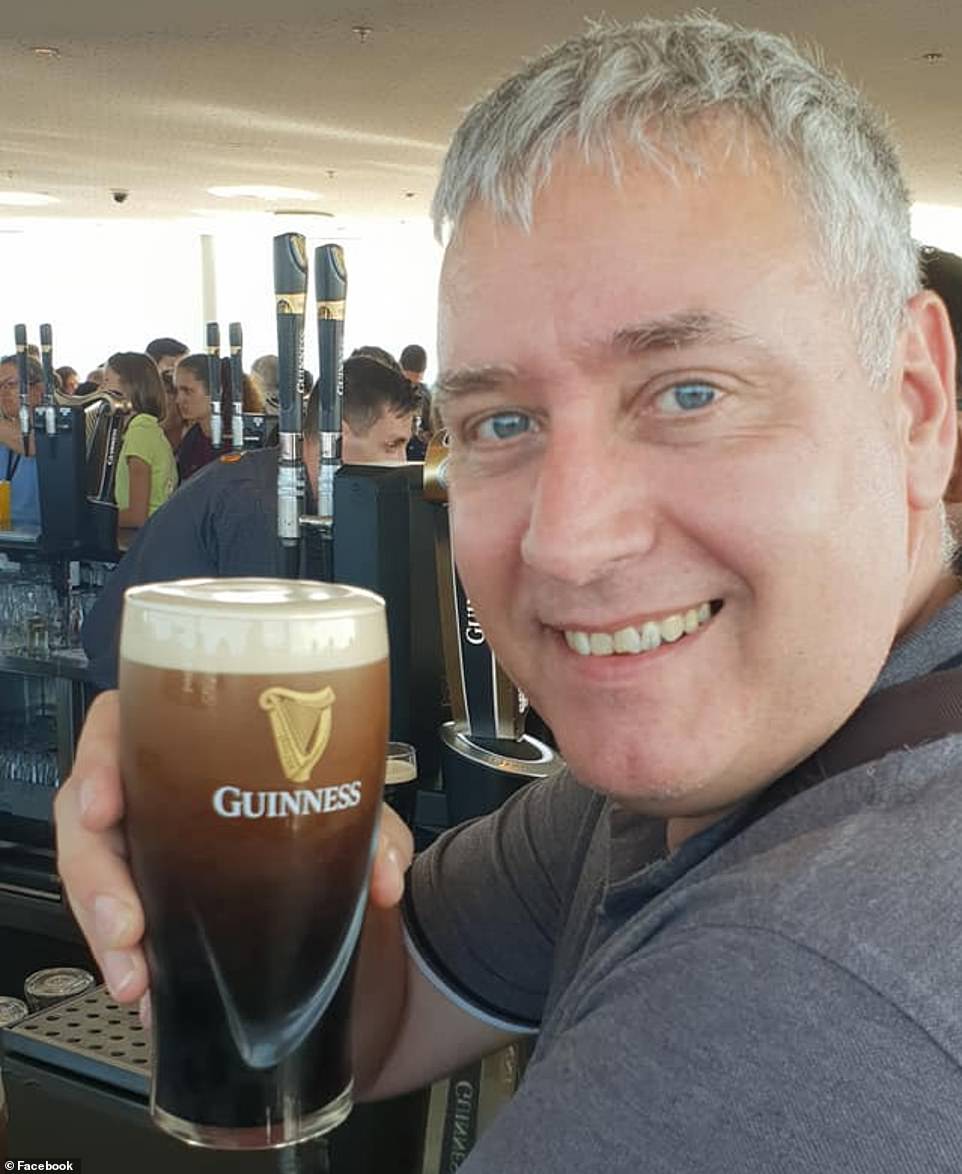 Mr Parker, above, spent a decade working as the manager of Club Louis in Catterick Garrison, North Yorkshire. The nightclub paid tribute to him online, saying he will be ‘sorely missed’

HOW VACCINES CAN  DRASTICALLY CUT YOUR RISK OF DYING

The main purpose of Covid vaccines is to reduce the risk of severe disease from the virus, which can lead to hospitalisation and death.

All vaccines drastically reduce the risk of someone dying.

Real-world data shows AstraZeneca’s vaccine — which most people in the country have received — reduces deaths by at least 80 per cent after one dose and .

A PHE study estimated at least 11,700 deaths were prevented in individuals aged 60 years or older as a result of the Covid vaccination programme in England between December and April 30.

The study included both the AstraZeneca and Pfizer-BioNTech vaccines.

Pfizer’s jab — more common in under-40s — cuts the risk of death by 97 per cent after two doses.

Italian Institute of Public Health data from 13.7million people jabbed with either AstraZeneca, Pfizer or Moderna jabs between December and May 3 reported a 95 per cent reduction in risk of death across all genders and age groups at 35 days after vaccination.

His close friend Steve Wignall, 59, told The Sun: ‘His family are devastated, they were very close and loved each other dearly.

‘But despite their terrible loss they would like it to be known that they’re encouraging everyone to please get vaccinated because they don’t want others to suffer as they are now.’

In one post on Facebook, Mr Parker shared an image of an anti-lockdown protest in London, writing ‘brilliant’ with a clapping hands emoji.

Other posts included a meme deriding people who post pictures of their vaccine card, and an image of a man wearing a tin foil hat with text written across it reading: ‘When you realise your tin foil hat has less aluminium than a vaccine’.

Mr Parker once wrote: ‘I feel the need to post information on here for people that aren’t receiving another side to the story due to media not being impartial.

‘When research is done into who finances the media it leads to the pharmaceutical companies. Who knows who is right or wrong. If I’m wrong I’ll hold my hand up but I will not stay silent.’

He also shared a link to a Facebook group called ‘The Unvaccinated Arms’, which tells its 22,220 members not to use the words ‘Covid’ or ‘vaccine’ due to ‘restrictions and posts being suppressed’ by the social media platform.

It is unclear whether Mr Parker was a member of the group.

Following his death, relatives have commented on some of the posts, with one person writing: ‘So sad to see this. RIP Uncle David, it could have saved you!’

Mr Wignall, who works as the director at Club Louis, fell ill with Covid on the same day as his colleague.  He was fully vaccinated while Mr Parker had not received one dose of the vaccine.

He said: ‘He [Mr Parker] didn’t believe in it and he didn’t want it, it was out of distrust of the elite, frankly, and we couldn’t change his mind.’ 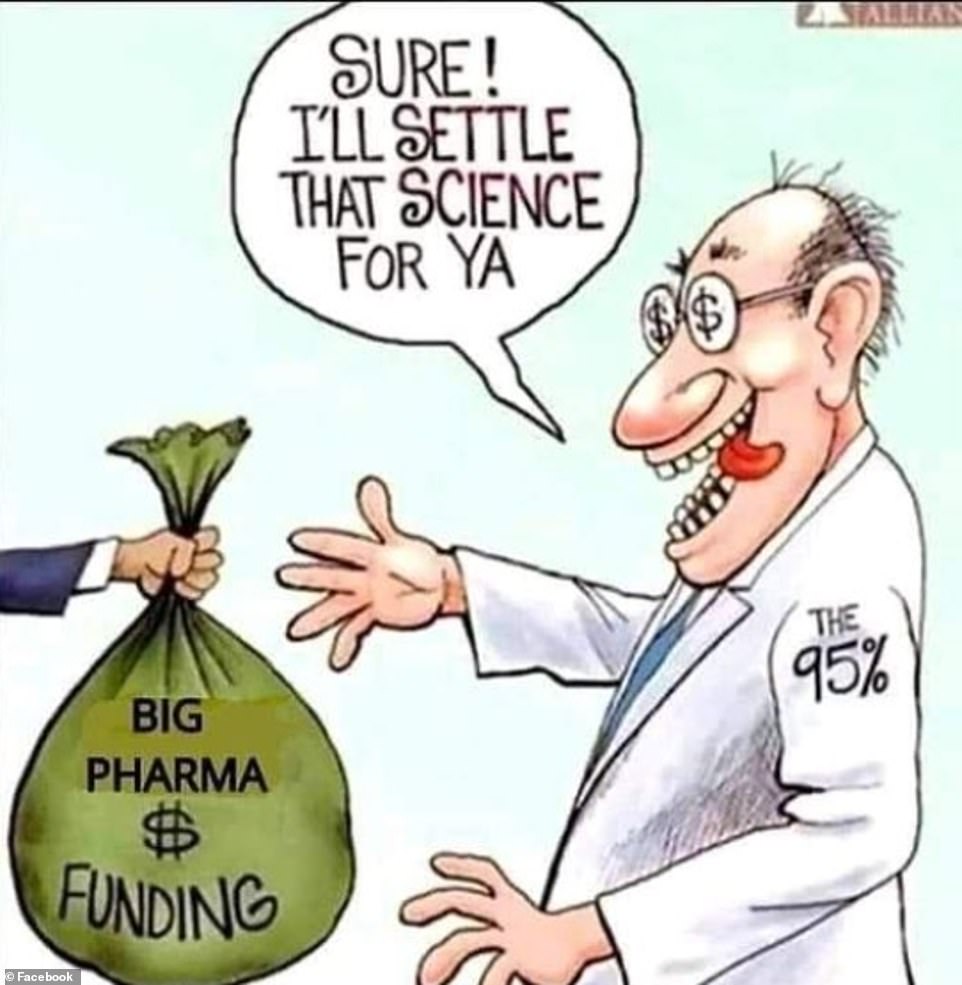 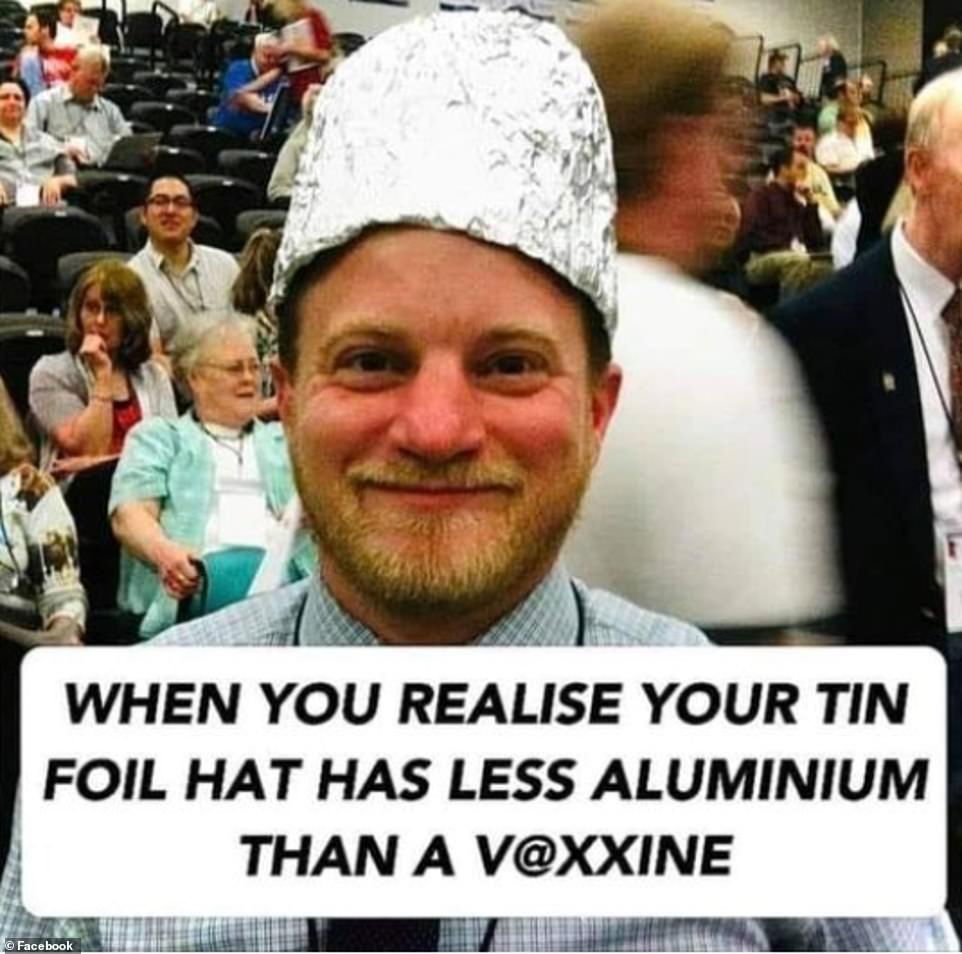 Other posts included an image of a man wearing a tin foil hat with text written across it reading: ‘When you realise your tin foil hat has less aluminium than a vaccine’ 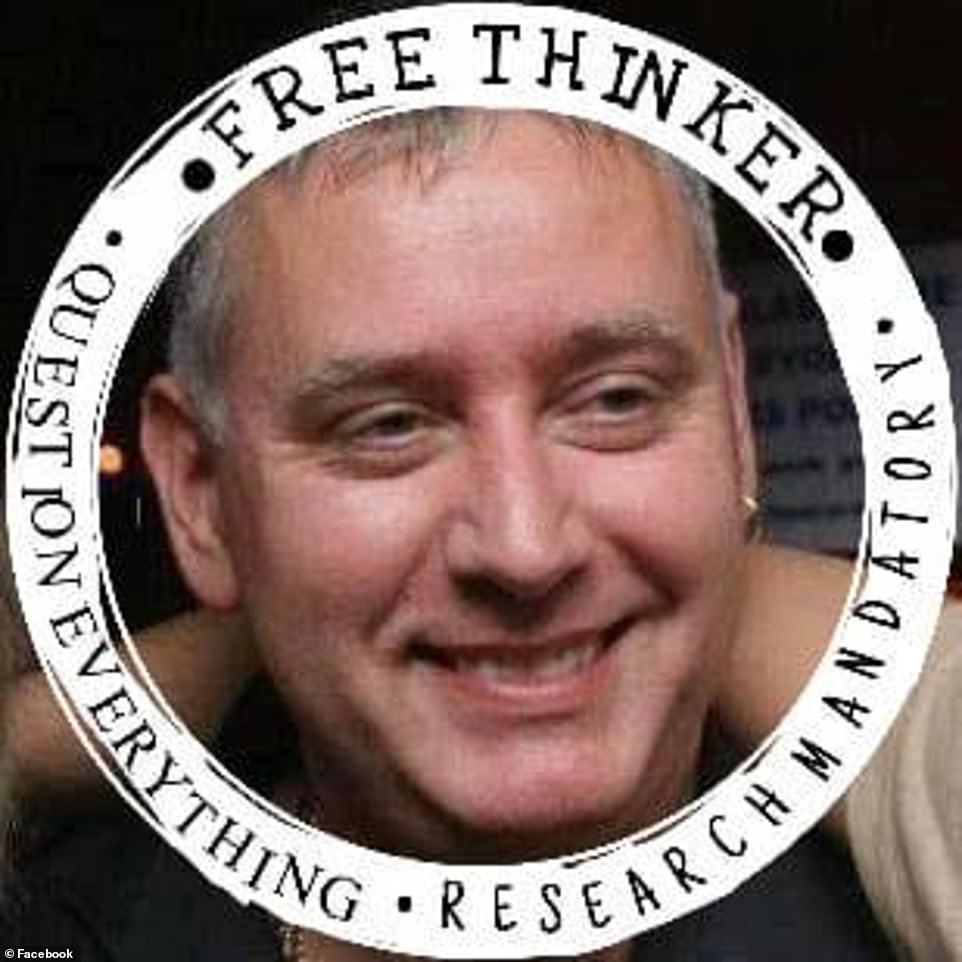 Fellow customers and employees paid tribute to the beloved bar manager, with one commenting: ‘I just want to say thank you for giving me and my mates the best time’ 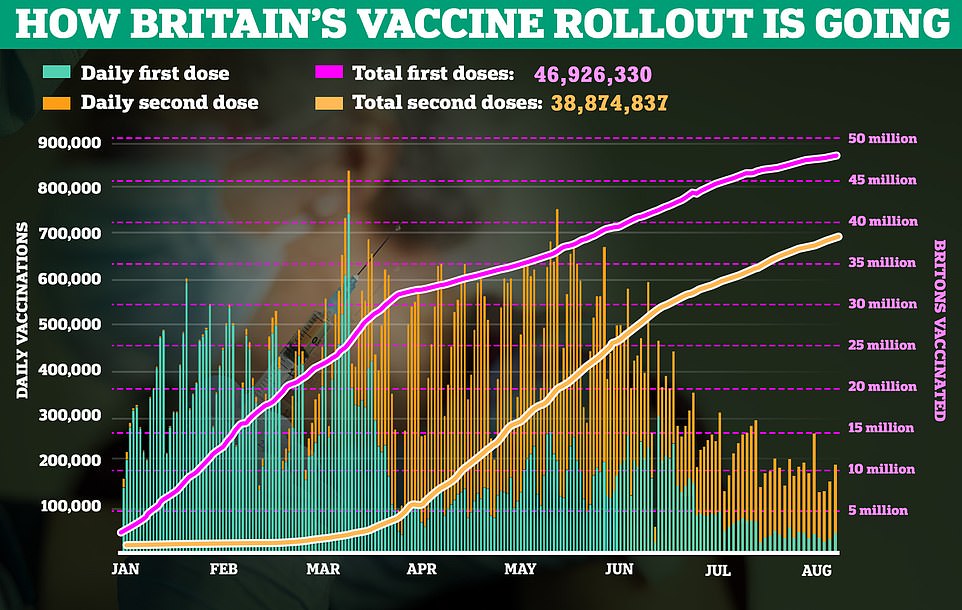 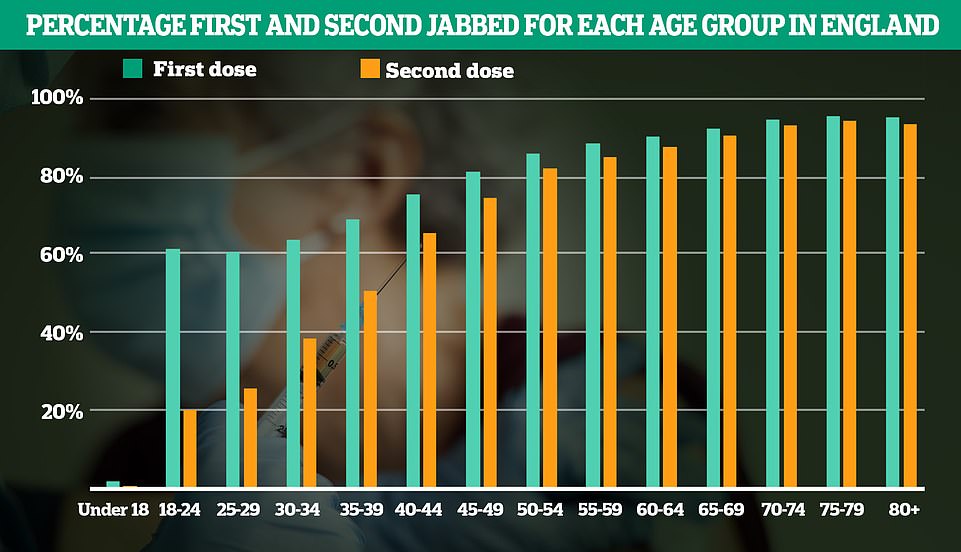 Overall, 2.5million over-50s (11 per cent) have not yet got their second jab and 2million haven’t had their first (nine per cent) 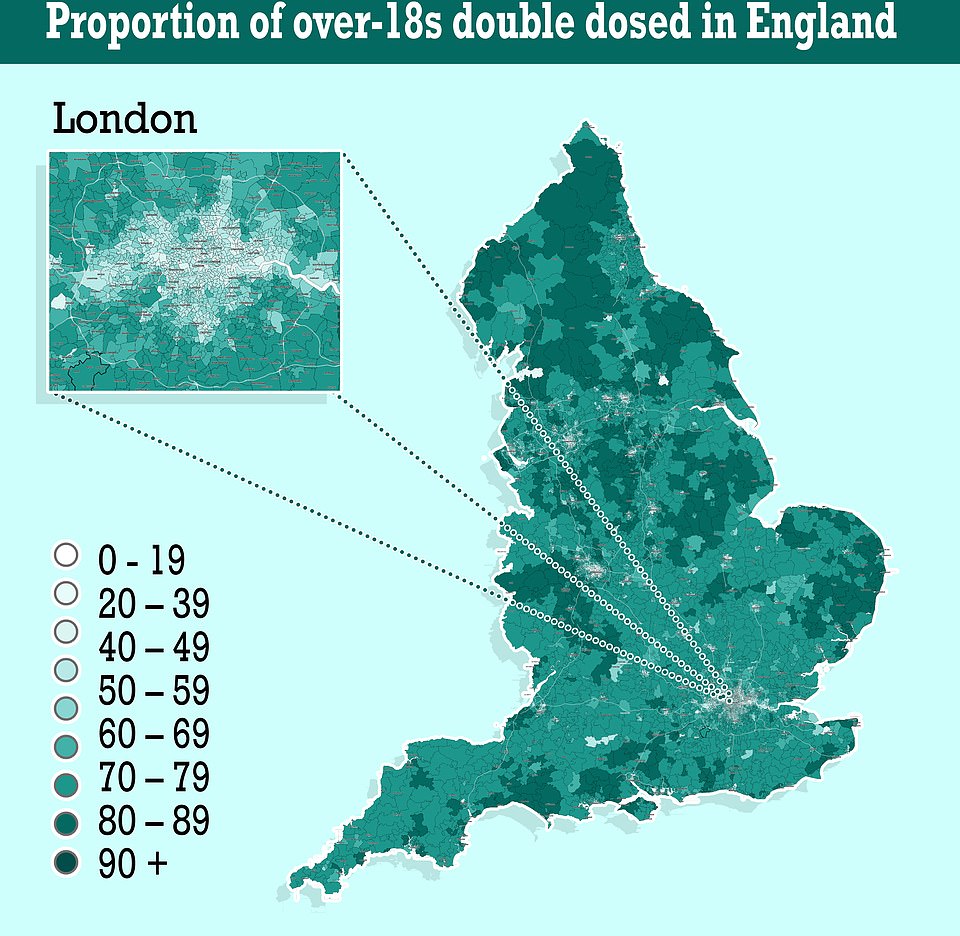 Harehills South in Leeds has reached the fewest over-50s, with just 813 of the 1,562 living in the area receiving their second dose — 52 per cent of the population. Map shows: The proportion of adults who have had both Covid vaccine doses 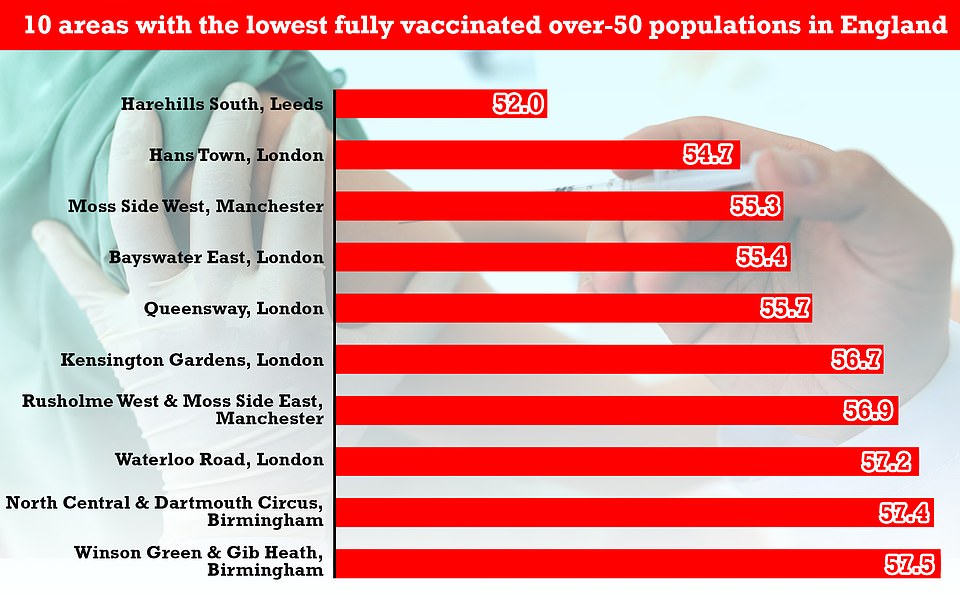 Nearly 30 areas in England have not fully vaccinated their over-50 populations against Covid, official statistics have revealed as experts warn there are huge pockets of the population still vulnerable to the virus. Graph shows

In a statement posted to social media, Club Louis said: ‘It is with enormous regret that we have to announce the passing of our manager, David Parker. 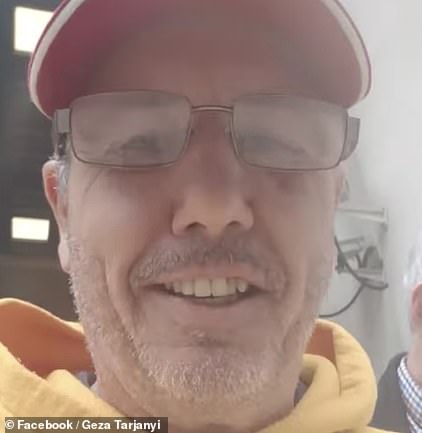 An aggressive anti-vaxxer who filmed himself screaming at deputy chief medical officer Professor Jonathan Van-Tam in the street in scenes which shocked the country has been let off by police, MailOnline has learned.

Geza Tarjanyi, 60, of Leyland, Lancashire, targeted Professor Van-Tam as he walked into the Ministry of Defence building in June.

The disturbing scenes caused widespread public anger and were later condemned by the Prime Minister.

Disturbed Tarjanyi, a one-time family entertainer turned full-time conspiracy theorist, filmed himself yelling abuse at Jonathan Van-Tam while accusing him of ‘genocide’ and lying to Britons.

But despite the uproar his actions caused, the decision has been taken this week not to prosecute him.

A Met Police spokesman said: ‘No further action will be taken against a 60-year-old man who was arrested on Monday, 19 July on suspicion of harassment and trespass on a protected site.

‘The arrest related to an incident which took place on Horse Guards Avenue, Westminster on the afternoon of Tuesday, 22 June.’

‘He was being treated for the effects of Covid but lost his struggle. On behalf of the whole Louis Family, we offer our deepest condolences to his family and friends, he will be sorely missed.

‘A pragmatic man, David would want the show to go on, so we remain open with the family’s agreement. RIP David, Mr LOUIS.’

Fellow customers and employees paid tribute to the beloved bar manager, with one commenting: ‘I just want to say thank you for giving me and my mates the best time.

‘Rest in peace David. Truly saddened and sending love to your family and friends.’

Another wrote: ‘That’s such sad news sending all my love to everyone. Worked with Dave when I worked at Louis bar and he was by far the best manager to work with.’

And a third added: ‘This is so heartbreaking. Dave was such a lovely person, and a joy to work for.  Louis will never be the same without him. He’ll be missed by so many people.’

It comes after solicitor Mr Lawrenson died of Covid on July 2, having previously refused his vaccine because he believed he ‘did not need it’ and instead placed his faith in his immune system.

Wanting to record ‘the realities’ of having the virus for ‘99,9% of us’, anti-vaxxer Leslie took to social media to share two vlog posts earlier this summer.

With intermittent coughing breaking up his monologue, he explained his symptoms and described them as ‘no worse than a cold’.

He later criticised the Government’s approach to Covid-19 restrictions, saying ‘these are things we have to suffer, it’s part of living’, before urging viewers to ‘trust’ their immune systems over vaccines.

He passed away just nine days after recording his initial video.

On the same day Leslie died, his partner Amanda Mitchell, 56, who has diabetes and was also suffering with Covid, was admitted to hospital with pneumonia – she was also unvaccinated.

And Mr Eyers, a construction expert from Southport, Merseyside, had been climbing the Welsh mountains and wild camping one month before his death last week, which came exactly four weeks after he tested positive.

His twin sister Jenny McCann said he was the ‘fittest, healthiest person I know’ and had thought he would only have a ‘mild illness’ if he contracted the virus.

She added that he had a ‘belief in his own immortality’. Mrs McCann said that Mr Eyers had ‘no underlying health conditions’ but did also state that he had asthma.

Before going onto a ventilator in hospital, Mr Eyers told his consultant that he wished he had been vaccinated – and died in intensive care after suffering from an infection and organ failure, leaving behind a daughter aged 19. 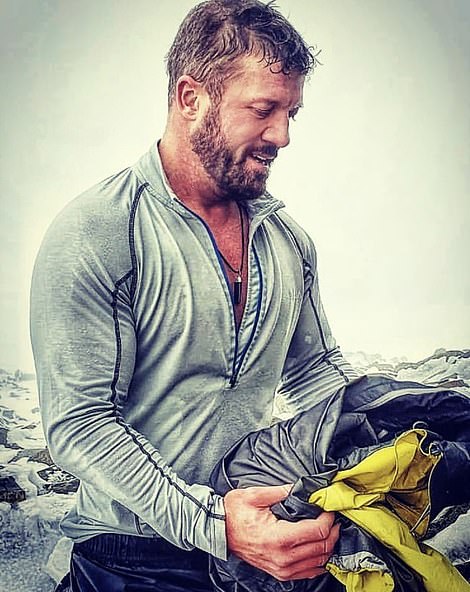 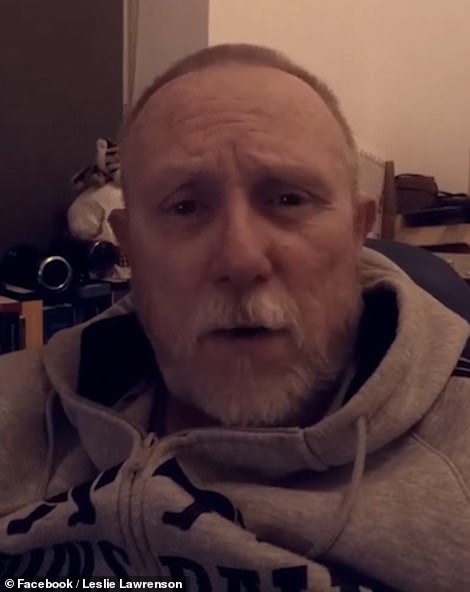 Cambridge University graduate Leslie Lawrenson (pictured above), 58, passed away at his home in Bournemouth on July 2, just nine days after releasing footage to Facebook explaining why Covid was ‘nothing to be afraid of’ 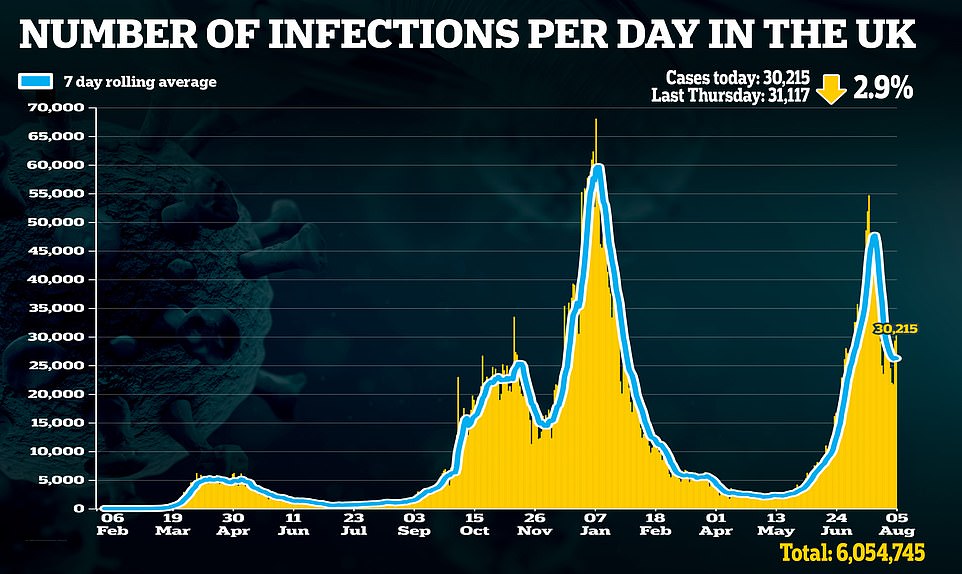 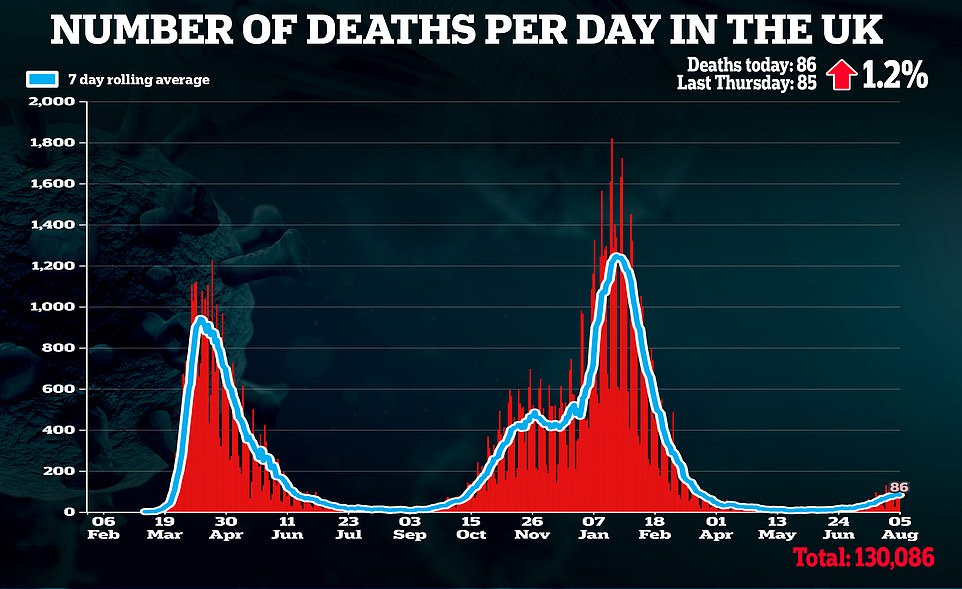 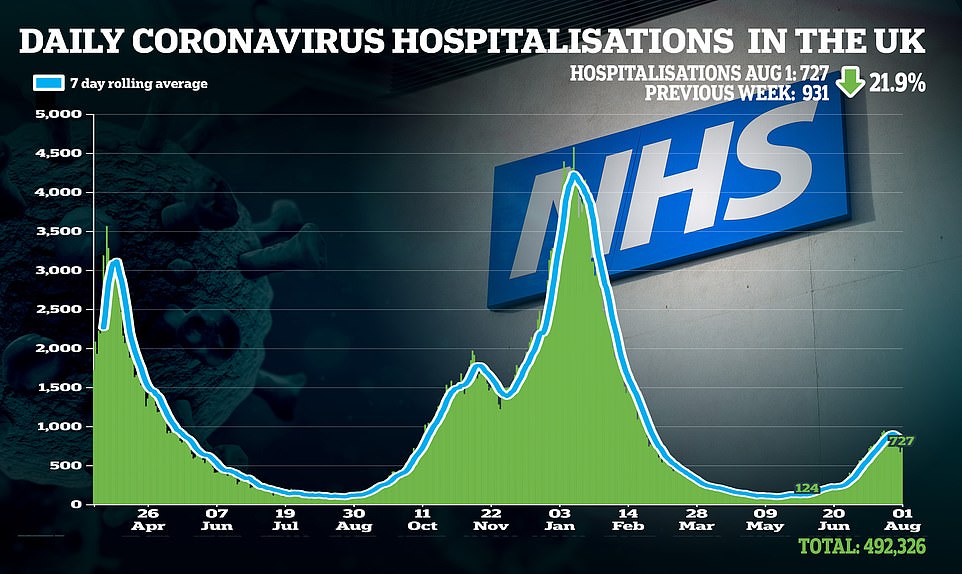 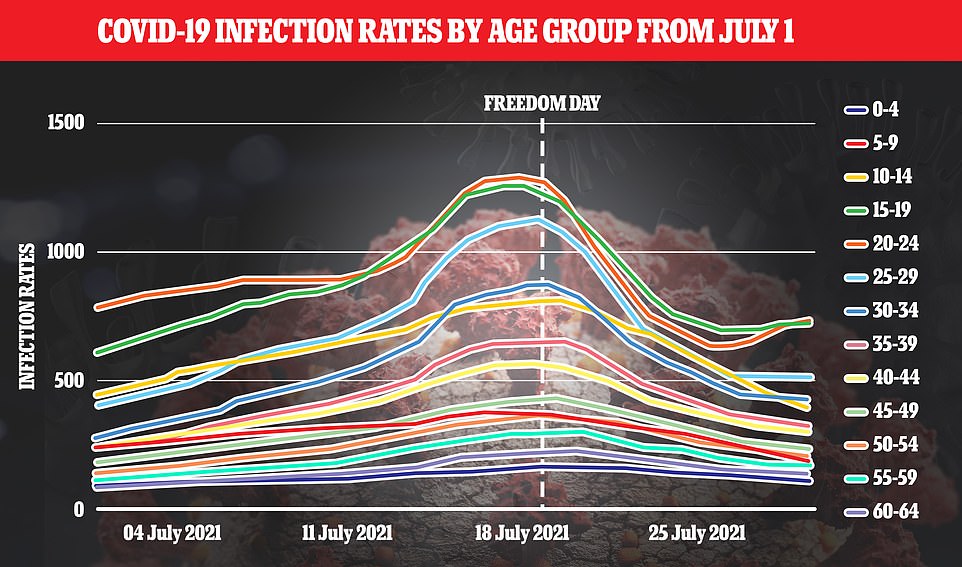 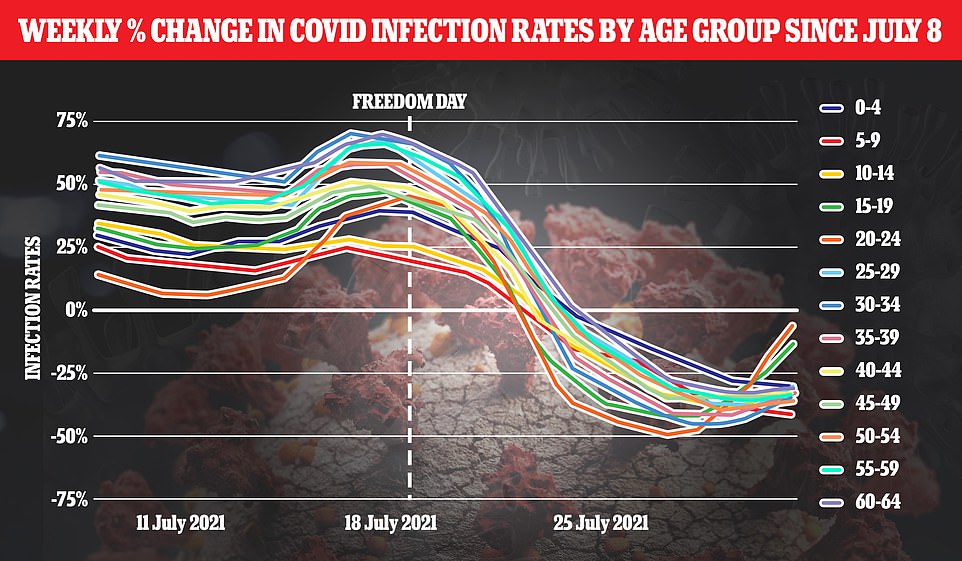 Covid cases are still dropping week-on-week in all age groups, but the rate of decrease has slowed considerably among adults in their early twenties. It could switch to a rise in cases in the coming days 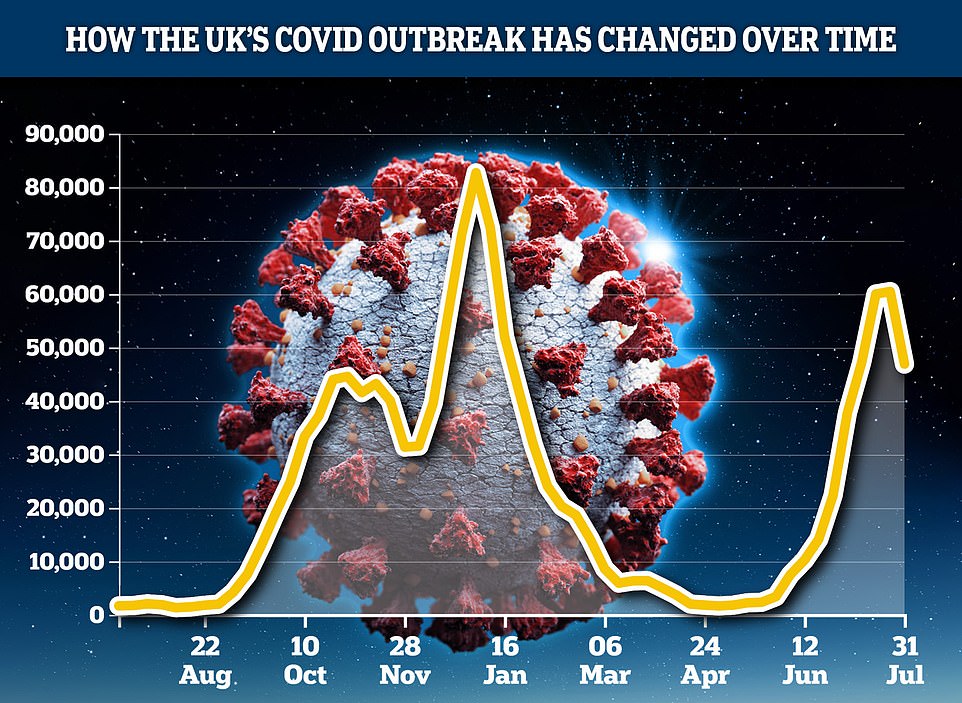 The Covid Symptom Study estimated cases fell by almost a quarter last week, after saying they had plateaued. It estimated 46,905 people are now catching Covid every day, down from almost 60,000 previously