After years of turmoil, TV presenter Ant McPartlin beamed with unbridled joy yesterday as he married his new wife Anne-Marie Corbett in a lavish, star-studded ceremony.

The happy couple shared a romantic kiss outside the church after the 45-year-old star said ‘I do’ for the second time.

His blonde bride, who is McPartlin’s former personal assistant, clutched a bouquet of white and purple roses and dazzled in a bespoke floor-length dress by designer Suzanne Neville that featured an off-the-shoulder design with lace detailing. 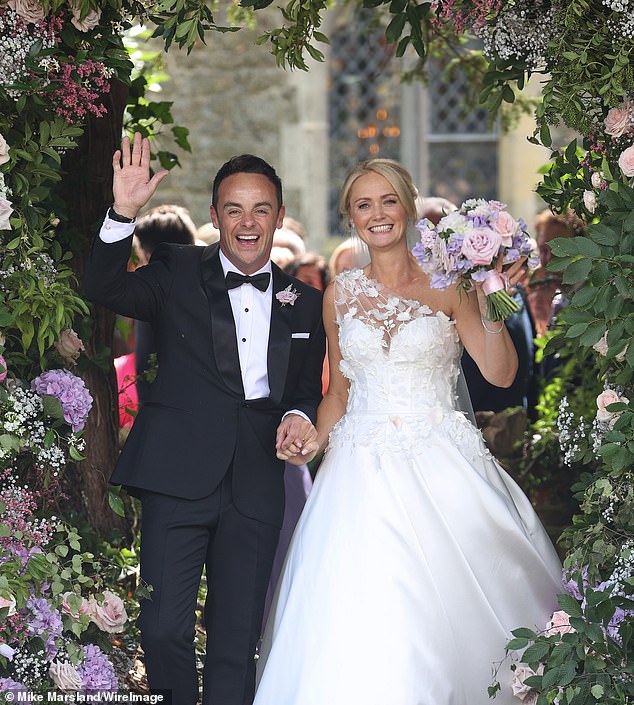 TV presenter Ant McPartlin beamed with unbridled joy yesterday as he married his new wife Anne-Marie Corbett in a lavish, star-studded ceremony. Pictured: The happy couple together in Heckfield, Hampshire 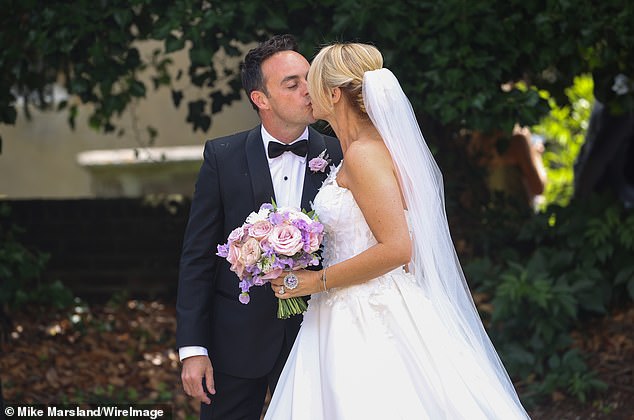 The ceremony at St Michael’s Church in the picturesque village of Heckfield in Hampshire lasted less than an hour before the newlyweds, accompanied by their famous guests, made their way to an opulent reception in a nearby stately home.

The groom arrived at the church just before 1pm yesterday, along with Donnelly, and greeted wellwishers before going inside.

In keeping with tradition, Anne-Marie, 43, was last to arrive with her bridesmaids and flower girls Poppy and Daisy, her teenage daughters from her marriage to ex-husband Scott Corbett.

Another flower girl was Isla Donnelly, the daughter of the best man. 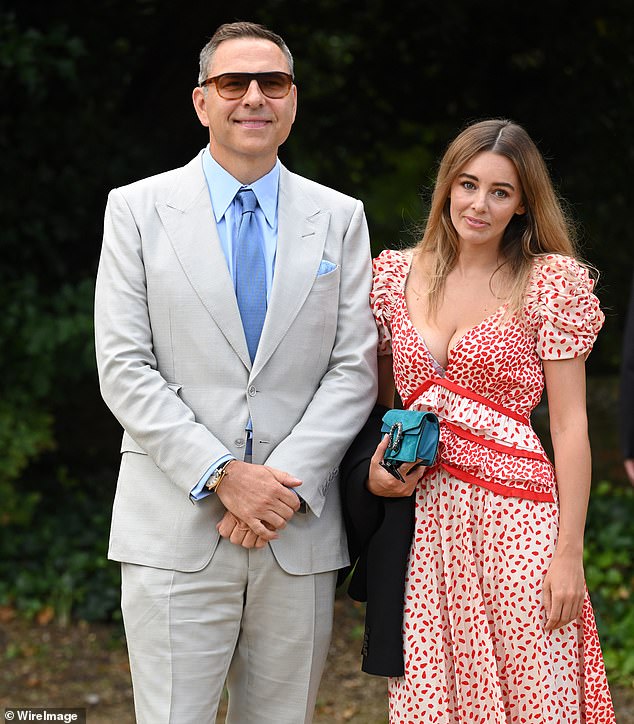 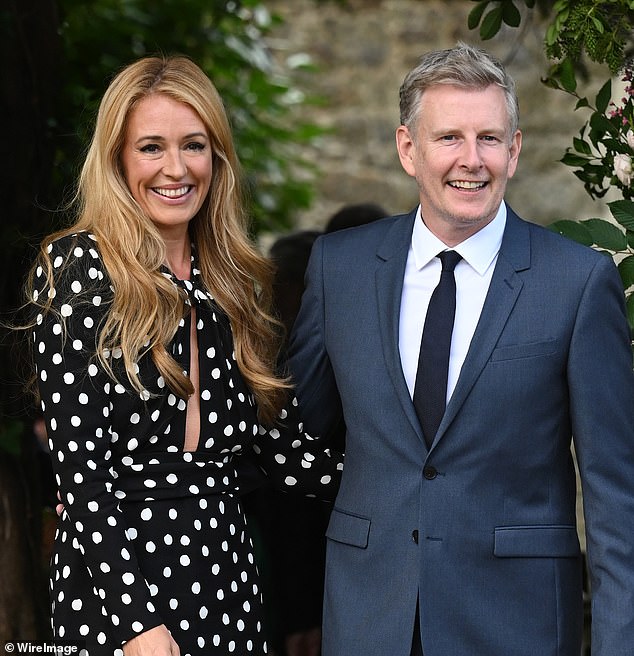 Cat Deeley, McPartlin and Donnelly’s co-star from their early days of hosting ITV Saturday morning music show CD:UK, was there with her husband Patrick Kielty

Among the 100 guests were a host of ITV stars including Phillip Schofield, who despite coming out as gay last year was there with his wife Stephanie.

Other famous faces included Frank and Christine Lampard, and Dermot O’Leary with his wife Dee Koppang. McPartlin’s Britain’s Got Talent boss Simon Cowell was absent due to being on holiday in Barbados, but show judge Alesha Dixon stunned in a bright pink dress as she arrived with husband Azuka Ononye.

Bride’s message for dad engraved on a trinket

Bride Anne-Marie Corbett paid tribute to her father with a trinket attached to her bouquet of flowers yesterday. 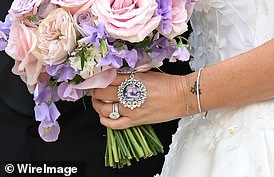 On the jewel was a photograph of what appeared to be her parents, with a message for ‘Dad’, followed by a kiss which was engraved next to it.

Ms Corbett’s special message was attached to her bouquet of purple and white flowers.

Cat Deeley, McPartlin and Donnelly’s co-star from their early days of hosting ITV Saturday morning music show CD:UK, was there with her husband Patrick Kielty.

The service opened with a reading from 1 Corinthians 13.4-7 and the Bridal Chorus by Richard Wagner before the bride, groom and their guests sang the first hymn, Lord of the Dance.

The next song was Here I am, Lord, followed by readings by Anne-Marie’s daughters Daisy and Poppy.

Then there was Paul’s letter to the Colossians, and The Bridge Across The River by Richard Bach.

Best man Donnelly read Bidding Prayers after the signing of the wedding document before the service, conducted by the Reverend Canon Dr Marion de Quidt, finished at 2pm

Geordie star McPartlin shared a kiss with his new wife before they left in a black Rolls-Royce, watched by a crowd of cheering fans.

Speaking outside the church, Schofield said the ceremony was ‘amazing’, adding: ‘It was really great fun, warm and cheerful.’

Walliams said it was ‘great fun’, adding: ‘It was very romantic, they have a good sense of humour, so there were a few laughs.’

McPartlin even began his groom’s speech at Heckfield Place, a luxurious £1,000-a-night hotel, by saying: ‘Hi, I’m Ant and I’m an alcoholic.’

Guests had been taken by coach to the Georgian mansion set in acres of gardens and meadows and with a private lake. Despite rumours they would be in attendance, Holly Willoughby, who stood in for McPartlin when he was forced to pull out of presenting ITV’s I’m A Celebrity in 2018, was not there. 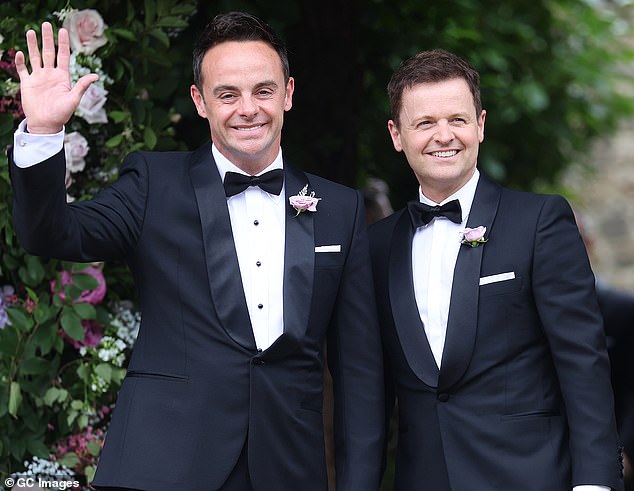 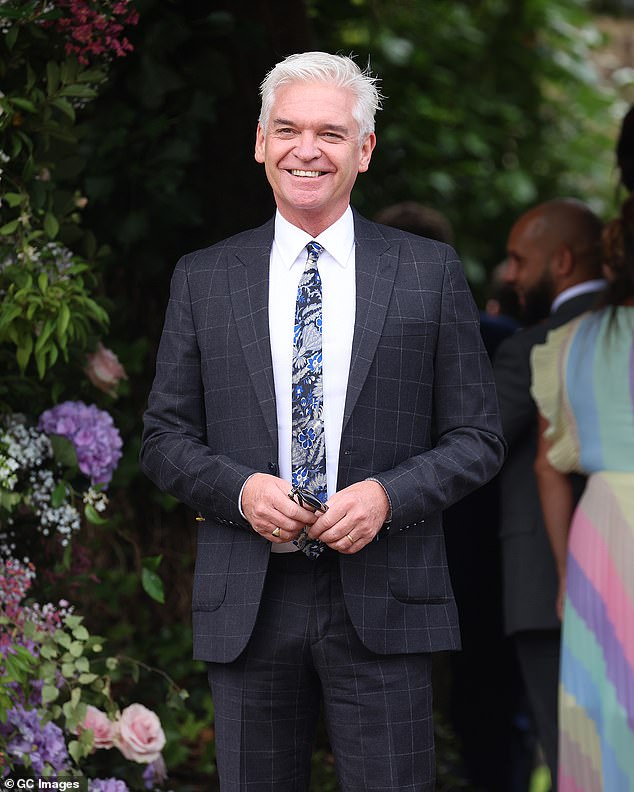 Among the 100 guests were a host of ITV stars including Phillip Schofield, who despite coming out as gay last year was there with his wife Stephanie

Late last week, she posted a photograph of herself with sunshine behind her, prompting speculation that she is on holiday.

Amanda Holden was also invited, but was aboard a boat yesterday. She sent her best wishes to the newly married McPartlins on Instagram.

Alongside a photograph of herself, Dixon, McPartlin and Donnelly aboard a private jet, she wrote: ‘So sorry we will miss @antanddec special day… we are still away. Sending out love and huge congratulations to Ant and Amzie on this amazing day.’

It was the second time both the bride and groom married after McPartlin proposed on Christmas Eve. His first marriage to make-up artist Lisa Armstrong ended in a bitter divorce, which was finalised in April 2020.

The couple had married in 2006 in Taplow, Buckinghamshire, with their reception being held at the famous Cliveden House Hotel.

While her ex-husband married in a second fairytale ceremony yesterday, Armstrong was on a romantic escape with her new boyfriend, James Green, at Pale Hall Hotel in Snowdonia.

His ex blocks out news with the sound of moos

Ant McPartlin’s ex-wife Lisa Armstrong posted a photograph of cows on the eve of his big day.

During her own romantic break in Snowdonia with new boyfriend James Green, Ms Armstrong, 45, posted the picture on her Instagram account, along with the mysterious words: ‘Cows in the meadow go Moo.’ 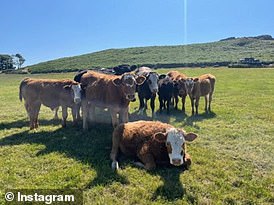 She made no secret of her anger when Mr McPartlin’s relationship with Ms Corbett was revealed.

Ms Armstrong and Mr Green were staying in the tranquil Dee Valley on the edge of Snowdonia National Park.

It is no secret that there is no love lost between her and the McPartlins – and particularly her ex-husband’s new wife, who used to work for her.

Mystery surrounded the whereabouts of the chocolate labrador dog, Hurley, she and McPartlin share custody of as part of their divorce arrangement.

It appeared he was not at the Britain’s Got Talent star’s wedding, nor did he seem to be with Armstrong in Wales.

For McPartlin, yesterday’s ceremony was the happy ending to some torrid years. In 2017 he admitted himself into rehab for addiction to prescription drugs and depression.

He later revealed that he almost died from a secret two-year addiction to painkillers.

Less than a year later, he was charged with drink-driving after crashing his black Mini in South-West London, injuring a four-year-old child.

He later took time away from his work commitments to recover and at the same time ended his marriage to Armstrong, who had spent years trying to save her husband from himself.

The couple were locked in a £62 million divorce battle which ended with Armstrong receiving around half of the fortune.

Ms Corbett, meanwhile, walked out on her husband for McPartlin – leaving him devastated.

The McPartlins may have looked deliriously happy yesterday, but without doubt there was a long trail of heartache behind them.