The Prime Minister was in Scotland this week, presumably on a mission to boost pro-Union sentiment. But if that was the plan, it was soon blown off course during a visit to a wind farm on Thursday.

In a typically Johnsonian intervention, he pointed out how Margaret Thatcher’s mine closures in the wake of the miners’ strike in the mid-1980s had turbocharged the UK’s move away from fossil fuels.

It was a tone-deaf observation, particularly in a country where the wounds are still raw in former pit communities, and will have done nothing to improve his reputation north of the border, where he is widely loathed.

The incident was all the more unfortunate, coming as it did at a time when support for a second referendum on Scottish independence appears to be on the wane.

Indeed, in recent days it was put about in Westminster that the Johnson Government is now so sure the UK’s future is secure that it might call First Minister Nicola Sturgeon’s bluff and agree to a referendum after all. 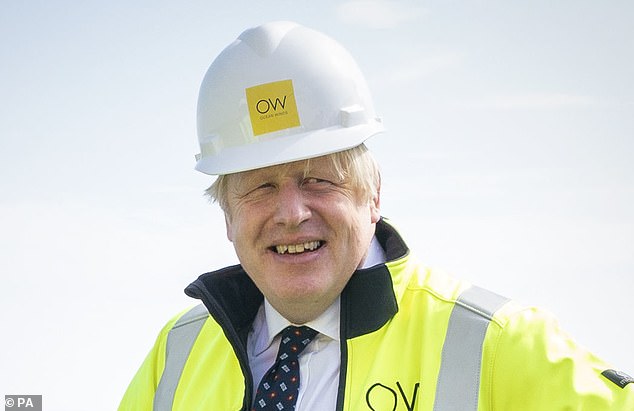 The Prime Minister was in Scotland this week, presumably on a mission to boost pro-Union sentiment. But if that was the plan, it was soon blown off course during a visit to a wind farm on Thursday

His Cabinet Office consigliere, Michael Gove, has even said there could be one if it was the ‘settled will’ of the Scottish people.

For in the unlikely event that a referendum is forthcoming, it is by no means certain the separatists would fare any better than they did last time.

A year ago, with St Nicola making her nightly ‘mother of the nation’ appearances on TV during the Covid crisis, Boris bombing after a series of blunders, and many pro-EU Scots still miffed by the Brexit referendum, polls showed a quite consistent majority for independence, peaking at an impressive 58 per cent in one poll.

But support for independence has been in retreat since the start of the year; and Sturgeon’s handling of the Covid crisis no longer appears to be as sure-footed as most of the media had us believe.

The fast and expansive rollout of vaccines was attributed to the benefits of being part of a wider, powerful Union and a clear majority of Scots want their politicians to concentrate on rebuilding the economy and society post- pandemic, not indulging in disruptive constitutional change.

However, I believe any talk of Westminster approving indyref2 is for the birds. The polls are still quite tight and referendum campaigns are unpredictable, as Johnson and Gove know all too well. 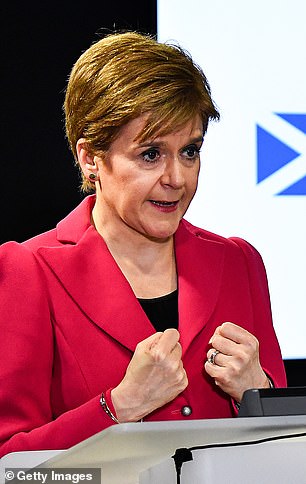 A year ago, with St Nicola making her nightly ‘mother of the nation’ appearances on TV during the Covid crisis, Boris bombing after a series of blunders, and many pro-EU Scots still miffed by the Brexit referendum, polls showed a quite consistent majority for independence, peaking at an impressive 58 per cent in one poll

There is no appetite for that sort of risk in the UK Government. And there is a widespread consensus in the Tory high command that there must be no second referendum as long as Johnson is Prime Minister, such is his unpopularity among even pro-Union Scots.

Not that this will stop Sturgeon playing the same broken record. Next month she will use the SNP’s annual conference to launch yet another campaign for a second referendum on Scottish independence.

But the SNP has been launching indyref2 campaigns since they decisively lost the first one in 2014, even though nationalist politicians said at the time it was a ‘once-in-a-generation’ decision. Only later did we realise the SNP’s idea of a ‘generation’ was a couple of years.

So what’s different this time? Not much. True, the SNP was comfortably re-elected as Scotland’s governing party in May.

But the fact is the SNP is not Scotland, however much it dominates Scottish politics, and most Scots do not share the party’s desire for a second referendum, at least not on Sturgeon’s timetable.

She says she wants a referendum before the end of 2023 which, in practice, would mean the summer of that year.

Polls show only a third of Scots would countenance another referendum within five years, much less two. Support for separation is back down roughly to where it was in the 2014 referendum — around 45 per cent.

Almost as important, the Scottish Electoral Survey shows that support for the Union is more solid than support for independence — something that is not immediately apparent when it’s the blue-faced separatists doing all the shouting and marching.

So why all these referendum launches, as regular and predictable as Scotland’s early exit from major football tournaments?

Sturgeon needs constantly to throw her activists the red meat of separation because that’s all that really unites them. Without the imminent prospect of independence, they would turn in on themselves and even turn on her.

This is especially true since, after 14 years in power, the SNP has really nothing to boast about. 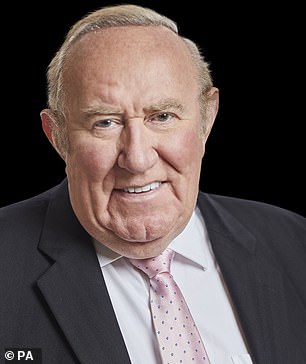 For in the unlikely event that a referendum is forthcoming, it is by no means certain the separatists would fare any better than they did last time, writes Andrew Neil

Between the financial crash of 2008 and the onset of the pandemic, the Scottish economy grew at only half the rate of the rest of the United Kingdom.

Oil and banking, until recently the bright, shining jewels of Scottish business, are shadows of their former selves. Silicon Glen is now but a foolish dream. Promised green jobs have failed to materialise. Once a manufacturing powerhouse, the only thing Scotland manufactures on any scale under the SNP is grievances.

Scottish schools, once the envy of the world, are mired in mediocrity. A study published yesterday shows that the life-expectancy gap between the richest and poorest areas of Glasgow is now wider than it was 20 years ago.

At 295 per million of the population, Scotland’s annual drug-related death rate is the highest in Europe, almost four times worse than the UK average, seven times worse than Ireland, twice as bad as when Sturgeon became First Minister seven years ago and three times worse than when the SNP took power in 2007.

Even her handling of Covid is now being re-evaluated. No part of the UK can be proud of its care-home record during the pandemic, but Scotland’s is especially bad.

Sturgeon will continue to rally her troops by putting the building blocks for a referendum in place. At some stage, however, she will have to abandon that process or contemplate defying Westminster and proceeding to a vote without its approval.

Ian Blackford, her Westminster leader, is already blustering that it wouldn’t be an ‘illegal or wildcat referendum’. But, of course, it would be — and it needn’t even lead to a London-Edinburgh constitutional stand-off, of which some SNP activists dream.

If a few concerned Scottish citizens took the Holyrood government to a Scottish court for acting illegally, the whole shenanigans would be halted without the Johnson Government lifting a finger.

Sturgeon and the SNP have had a remarkable innings. But independence still eludes them, it is not clear how they can achieve it and the going is likely to get tougher rather than easier the longer they are in power.

Perhaps, before the current Scottish Parliament is over in 2026, Sturgeon will have departed to the sort of international post that often goes to leaders of small countries who have schmoozed the global stage.

Nobody should envy whichever luckless member of the SNP hierarchy is left to pick up the pieces.