Sitting in his sister Clare’s bedroom, actor Greg Wise did everything he could to ease her suffering.

‘I wiped her face. I held her hand. I kissed her forehead. I told her I loved her. I said how unbelievable we had both been, but I said it was all just getting too f***ed-up now,’ he later recalled.

‘I told her that she didn’t have to worry, that everything was sorted. And I told her she could go now, if she wanted to.’ Clare died a minute later, holding her brother’s hand.

For three months, Greg had cared for his beloved sister, 18 months his senior, after the cancer that started in her breast spread to her bones.

Moving into her flat — just a few doors down from the house he shared with his wife, actress Emma Thompson — he made her watermelon smoothies and attached a walking stick and climbing rope to her bed, so she could pull herself out of it.

He stripped down to his underwear so he could help her in the shower, and when she grew too ill to continue writing her irreverent blog about having cancer he finished it for her.

Since childhood, the two had shared an indelible bond. 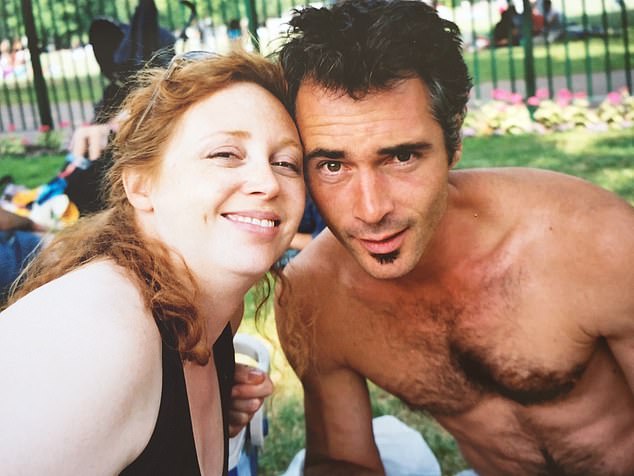 Clare (left) described Greg Wise as her ‘best friend’ and after her death, aged 51, in September 2016, Greg acknowledged her continued influence on his life

Clare described him as her ‘best friend’ and after her death, aged 51, in September 2016, Greg acknowledged her continued influence on his life: ‘The relationship isn’t over, the relationship continues. Death doesn’t stop you having a relationship with someone. They just don’t answer back.’

And so it is for Clare that Greg, 55, nonplussed by fame and uncomfortable in the limelight despite his impeccable showbusiness connections, has agreed to take part in this year’s Strictly Come Dancing.

The tenth contestant to be announced yesterday, he joins the likes of presenter Dan Walker and actress Katie McGlynn on the BBC show, explaining that his decision was fuelled by the desire to honour the fifth anniversary of Clare’s death.

In a poignant tribute that swiftly went viral on social media, he described his ‘beautiful sister’ as a ‘huge disco queen’ adding: ‘She left our world almost exactly five years ago in a glitter ball coffin.

‘This is for her. My gorgeous Diva sis, who would have been insane with excitement that her little bro was doing this.

‘I will channel her, as her bro can’t dance — but I’m thrilled to be dipping my toes, knees, hips and arms into this wonderful world, and hope to make her proud, and obviously make her laugh…’

Brought up in Northumberland by a ‘stoic and northern’ father, Douglass, and ‘fiery and Hungarian mother’ Yvonne — both architects — the siblings were at first glance, stark opposites.

Clare loved books while Greg ‘fell out of trees’ — but a bond was born of surviving their parents’ argumentative marriage that ‘had a reasonably tricky dynamic which made Clare and I work together well, play well and keep our heads down,’ Greg has said.

They also both harboured a passion for the film industry.

After abandoning a career in architecture, Greg carved a career on stage and screen, becoming known for roles such as Mountbatten in Netflix drama The Crown, Sir Charles Maulver in BBC costume drama Cranford and Doug in 1980s musical Walking On Sunshine. 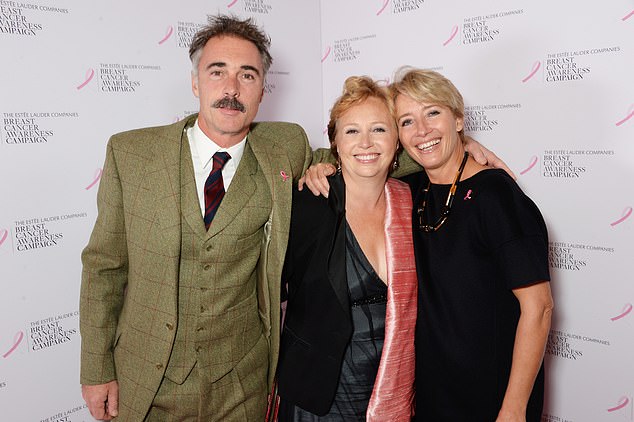 Clare loved books while Greg ‘fell out of trees’ — but a bond was born of surviving their parents’ argumentative marriage that ‘had a reasonably tricky dynamic which made Clare and I work together well, play well and keep our heads down,’ Greg has said.

It was through his breakthrough role as the rascal Willoughby in 1995 film Sense and Sensibility that he met Emma, 62, who starred as Elinor Dashwood, and the couple moved in together on the same North London street as Clare.

Fiercely intelligent with a double first in history from Bristol University, Clare went on to work for the UK Film Council and became vice president of Universal Pictures.

‘My big fear with Greg used to be that he would end up marrying someone I didn’t like, and the greatest bonus has been that he ended up with Emma Thompson, who was a role model for me long before I knew her,’ she once said.

Emma, for her part, described their relationship as one ‘that grows more loving and meaningful with every year.’

Greg has always been lower-profile than his Oscar-winning wife — and quite comfortable with it: ‘There’s no comparing. I’m comfortable in who I am. I don’t need to willy-wave,’ said Greg, content for his career to take a hit when he turned down roles to be present during his daughter’s formative years.

‘I probably used Gaia as a way of not doing things, saying, “No, I’ve got to be around,” instead of filming abroad for a few months,’ he said. ‘But she was such a fantastically wanted child — an IVF baby — we thought, “We got our chance, we’ll do it as well as we can.” ’

Clare also developed a rapport with Greg and Emma’s children. She bought Tindy, their adopted son, 33, a human rights lawyer, his first bike, and proved an indispensable sounding board for Gaia, 21, an actress.

‘Gaia has been lucky,’ recalled Greg of the relationship. ‘It is so important to have someone of your parents’ generation who you can go to and say, “My dad is such an a***.” And they can go, “He’s always been an a***.” ’

With Emma’s mother, the actress Phyllida Law, living on the same street, theirs was an idyllic extended family existence until 2013, when Clare discovered she had a 3.5 cm tumour in her left breast and cancerous cells in the lymph nodes in her armpit.

‘As a single woman, I’m strong and capable and used to thinking on my feet, but when I emerged from the clinic that day, I felt small — like you do when you are little and want your mum — and very alone,’ said Clare, who’d had occasional boyfriends but never a live-in partner.

Her brother — the first person she called and whose presence in her life had grown ever greater after he supported her through the death of their parents a few years earlier — helped bolster her spirits.

‘He answered his mobile while standing at the checkout in Sainsbury’s and, after saying something I can’t repeat here, told me that Emma was at home and that I was to get straight in a cab and go to her,’ she said.

Emma, meanwhile, recalled her first response was ‘instinctively practical’, adding: ‘I knew she would want a large vodka and tonic, and then she would want to sit a while.’

The couple formed part of an impenetrable ‘circle of strength’ around Clare, whose candid blog about her illness, started in 2013, garnered tens of thousands of readers.

‘I had to go for an MRI scan the following day and, in retrospect, I can see I was too brave in insisting I went on my own.

‘Ever since, either Greg, Emma or someone else in my circle of strength has come with me to every appointment,’ she said.

As she received treatment, Greg entertained hospital staff with balloon animals and charmed the nurses. When she was well enough, Emma distracted Clare by taking her on holiday and to the Baftas. 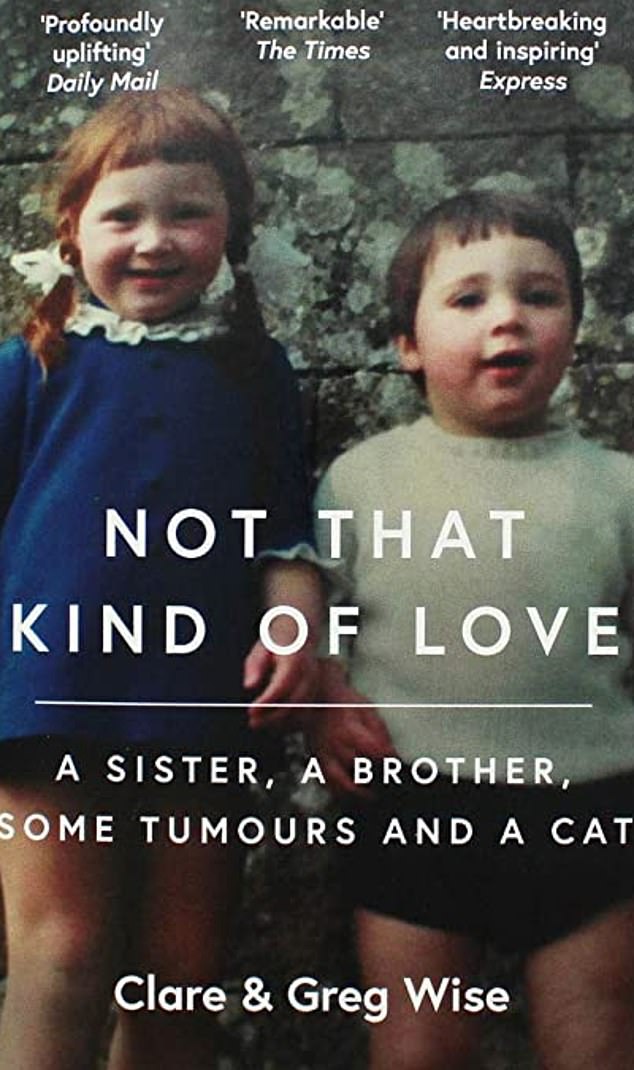 After she died, Greg – who finished writing Clare’s blog when she was too ill to do so and turned it into a book, Not That Kind Of Love, published in 2018 – felt relief that Clare was no longer in pain.

Stoic and self-deprecating, Clare said the only time she cried during the initial stages of her illness was on the day chemotherapy made her long, red hair fall out and she ‘woke up to find what looked like a rodent on my pillow’.

At Emma’s suggestion, Greg shaved her head, while Gaia took pictures for Clare to post on her blog.

Clare was told she was cancer-free in 2014. Tragically, however, the following year the disease returned to her bones, spreading to her arms, ribs, spine and skull.

She learned it was incurable as she was about to go on the ‘holiday of a lifetime to Greece’ with Greg, Emma and Gaia. Instead, Greg cancelled the trip and moved into his sister’s flat to care for her.

The selfless decision was instinctive, he suggests, because ‘there was a contract struck between us that went all the way back to when we were three.’

He didn’t only carry out the intimate duties of caring, but practicalities such as feeding Clare’s cherished cat, Grably, and doing her gardening, later describing the time as a privilege; that learning how to help her swallow a pill or drink water as she grew desperately ill made him ‘more compassionate and kinder and able’.

He added: ‘As hard as it was for me to see what was physically happening with my sister, I know that period of time was extraordinarily powerful for the two of us in a very positive way, even though it was fuelled by such a terrible disease.’

After she died, Greg – who finished writing Clare’s blog when she was too ill to do so and turned it into a book, Not That Kind Of Love, published in 2018 – felt relief that Clare was no longer in pain.

‘It was untenable for her and had been for a long while. She was finding a reason to open her eyes every morning and I think I was part of that reason,’ he said.

Initially, grief hit him ‘like a vomit’ he had no option but to acknowledge: ‘You can be walking down the street or at the supermarket at the frozen peas counter and suddenly it hits you, and you go with it. Don’t get in the way, don’t objectify it — it has to come out.’

He and Emma would take refuge in their holiday home, on the banks of Loch Eck in Argyll, Scotland, where they spend several months a year, and where Greg enjoys splitting logs, playing with power tools and smoking his own mackerel.

Therapy, he says, has been essential, while work provided a distraction. He started filming the second season of The Crown two days after Clare’s funeral — telling only ‘a couple of people on production’ about his bereavement so as not to elicit pity.

Not that he has ever been one to seek superfluous attention, saying he is ‘more nervous’ about the spotlight he will receive from Strictly than ‘the actual dance steps’.

Emma, he says, is ‘stupidly excited’ that he is going on the show.

How long he will last, however, is anyone’s guess, not least, he jokes, because he ‘can’t dance’.

But with his sister’s strength and spirit spurring him on, he will sprinkle stardust on the dance floor nonetheless.

‘Clare’s still very much present and will always be,’ he said. ‘I carry her with me.’